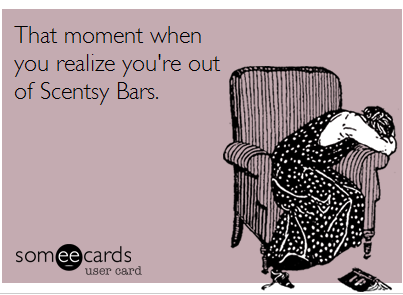 In what follows, I attempt to diagnose the IRL Fetish, or the explicit preference of physical over digital, and in particular, the designation of the former as more “real” than the latter. Bear with me, the punch line is at the end.

I get invited to a lot of things. It’s not because I’m cool or popular—rest assured, I am not. I also get regular messages from friends offering deals on the products that they sell, such as Scentsy, MaryKay, and Tasteful Pleasures. It’s not because I’m rich or have expressed interest in these products—rest assured, I am a poor post-doc far more likely to buy new running shoes than liquefying candle wax .  Rather, I receive these invitations, messages, and deals because I am part of a large Facebook network, through which information can be easily spread.  And as a recipient under these circumstances, I think little of not only declining invitations and consumptive offerings, but often completely ignoring said objects with a fully clear conscience. No, I do not want any Fifty Shades of Grey Toys, nor do I want to attend an event entitled “Come Punch Me in the Face” (yes, that was an *actual* event someone invited me to), and I feel no inclination to articulate my decline, but assume that my silence implies disinterest.

To talk about it, this seems rude and inconsiderate. Yet, I am not a rude person (unless you count the past me that interacted with my parents between the ages of 12 and 18). So how do I, a generally polite and empathetic person, sleep at night? How do I justify my flippant dismissal of social outreach from my network? It has to do with digitality, scarcity, and “real”ness.

The affordances of digital communication, and social network sites in particular, are such that users can distribute information (and invitations) with little cost. It takes very little time to create a group, craft a mass message, share information, or even construct a personal birthday note. In short, interpersonal social outreach has taken on a mass-production model. In the pre-Facebook days, my birthday consisted of a big slice of cake, a few cards, and a handful of phone calls from all of the usual suspects (I’m looking at you Nana). Today, my birthday also consists of 121 Facebook notifications, and exclamatory notes from that girl I played basketball with during the “rude” years (i.e. 12-18) and that guy who I can’t quite place, but am pretty sure lived somewhere in my dorm Freshman year (or maybe he was just friends with my roommate?).  I am compelled to respond the cards and phone calls, not so to the Facebook posts (although I would be lying if I said I didn’t like the attention—even if it is manufactured).

Now before everyone gets up in arms, I do not think the physical is inherently more real than the digital. I do, however, think that the affordances of digital technologies enable abundant production, and in doing so can water-down the meaning of an object and/or interaction. It is the productive affordances of digital technologies that lead to an often implicit feeling that the digitally mediated social outreach does not always require a reply.

This is captured, I believe, in, Sarah Wanenchak’s (@dynamicsymmetry) seemingly inexplicable and yet undeniable digital dualism experience with regards to her own book. She wants the physical copy, as this—and only this—will make the publication real. The digital copy perhaps feels like a fancy version of the document she keeps in some folder on her computer and/or on a cloud, something she can create, produce, and distribute all on her own, something that does not need external validation or passage through a highly selective gatekeeper. In this, the digital seems less real.

Importantly, we can see this trend through multiple technological advancements, not just digitization. For instance, the same story told via motion picture perhaps feels less real than a play, as audiences in the latter are limited to the physical space of the performance hall and the temporal moment in which it is performed. A book from the printing press perhaps feels less real than one which was hand-written, as the former can be owned by many, while the latter is only possessed by one.

I should also note that some digital interactions very much feel real, and do indeed require response. A personal email or Facebook message; a tagged status update; an @-directed tweet. These are quite real, quite intentional, and interactionally different than mass produced messages and/or invitations. In the same way, mass mailings from political candidates, sales calls, and change-of-address cards do not compel me to respond.

The perceived realness of an object or interaction is not inextricably tied to the media through which it was produced. The media and the object/interaction, however, are also not wholly disconnected. Rather, the content and the circumstances of an object’s materiality affect—but do not determine—one another.

Digital technologies afford the mass production, consumption, and distribution of objects and interactions in ways that demolish scarcity. This new abundance can shallow out the object’s/interaction’s depth, creating a nebulous feeling which allows dismissal, facilitates less personal consumptive investment, and generally diminishes the tangibility of the object’s/interaction’s consequences. This, I argue, is a diagnosis of the IRL Fetish.

Lovely piece. Thoughtful and superbly written. Now that we've met in person, I have better understanding of you. And -- Happy Birthday!

pj and i were just talking about the facebook birthday thing the other day. in particular, i was saying how i keep track of my closer friends' birthdays (once i know them), and make a point of calling, texting, and/or mailing things rather than leaving facebook messages. i do this for two reasons:

1) it seems more personal. each message is only for one friend, and is not part of any larger public performance. i'm not earning any additional social capital on it, say by demonstrating my "thoughtfulness" or "cleverness" (depending on what i write on their wall) to everyone else.

2) i want to demonstrate that i remembered All By Myself, rather than with facebook's help. i want my friends to know i care enough not only to send personalized, private messages, but to notice and keep track of when their birthdays are in the first place.

[...] “digital technologies enable abundant production, watering-down the meaning of an object and/or inter...“ [...]

Great post. It's fascinating that the presumed lack of labor seems to be at issue here. By contrast, in an excellent recent journal article of yours on authenticity and SNSs, the key point is *concealing* labor in self-performance. The visibility of labor is crucial in both cases, but in contrasting ways.

By the way, a recent article by Natalya Bazarova (“Public Intimacy: Disclosure Interpretation and Social Judgments on Facebook”) addressed these issues, though from a psychological perspective. Worth a comparison:

[...] even when one fully recognizes that there is but one augmented reality, and Davis considered what might be behind some people’s feelings that digital interaction is less “real” or meaningful. Guest author James Vincent (@jjvincent) [...]

[...] is by no means an exhaustive listing. Jenny’s looked at embodiment, at why digital gestures might sometimes feel less meaningful than other kinds of gestures, why the emotional impact of social media isn’t predetermined, [...]