Who Benefits from Government Programs?

As politicians negotiated regarding the fiscal cliff, they debated whether to cut social programs aimed at alleviating poverty and deprivation.  Most of us imagine that these programs help a minority of the population.  In fact, the Pew Research Center reports that more than half of the population has received government benefits from one of the six most well-known programs: 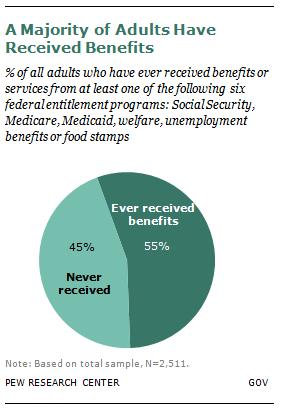 This isn’t the so-called 47% that Romney claimed would vote for a Democrat no matter what.  In fact, people who received one of these six benefits were only slightly more likely to vote Democratic: 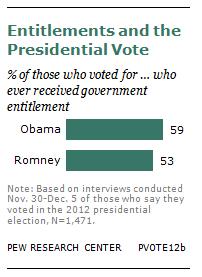 In fact, receiving benefits is pretty well spread out among the population. Except for people over 65, there seems to be significant consistency in the receipt of at least one benefit:

Notably, these programs also go to help the poor, women (largely because they end up single with young children), and people in rural areas.

Interestingly, many of us who have benefited from targeted government programs (“targeted” because we all benefit from programs like, oh, transportation initiatives and environmental protection and [insert dozens more here]) don’t know that we do.  In a previous post, we showed that large proportions of people who’ve benefited from social programs don’t recognize that they have unless their thinking is sparked by asking them about specific programs.  (It’s kind of like responding “No I don’t do drugs” and then being asked specifically about marijuana and saying, “Oh yeah, well that one I guess!”).

Since it is indeed the majority of Americans who benefit from targeted programs, it shouldn’t be too hard for politicians to find it in their hearts to support these programs.  That 57% of conservatives and 52% of Republicans have used them suggests that the political right is more interested in purporting an ideology than serving its constituency.

Alternatively, they realize that a certain proportion of benefit recipients also believe that the government “does not have the responsibility to care for those who cannot care or themselves.” About a third of people who hold onto this principle have used benefits:

It seems that data like this might be very useful for what we really need: an educational campaign designed to help Americans understand what social programs do and who benefits from them.   Maybe then we could have sensible policy discussions.

It's interesting that no one considers the home mortgage interest deduction to be a government program, but when you think about it, it undoubtedly is.

I would like to point out that the 47% comment (which I agree was odious for several reasons) was referring to people who received more in benefits than they paid in taxes that year. That's a somewhat different statement than just benefitting from a program in general. I would *hope* that we benefit from our taxes occasionally. There is a difference between receiving services for a price paid and receiving charity. I'm not going to get my taxes *back* if I decline to take unemployment because my savings are sufficient to last until i find a new job.

The fact that I will (hopefully) receive money back some day from my contributions Social Security in no way requires me to have the opinion that that is the best investment I could have put that money toward. This article makes the same mistaken assumption as the Romney quote, that people should base their voting habits entirely on what will make them the most money in the short run, and not what is best for the country as a whole.

the high number of women relative to men is probably also related to age - there are a lot more women who are older than 65 than men.

I think these discussions are very naive.

The US Military is a government program that benefits everyone.

The US patent office / copyright protection is a government program that benefits everyone.  Indeed this program benefits rich people much more than it benefits poor people, because ability to make money off of investment typically comes from ability from companies to extract large profits due to intellectual property protections.

Medicaid / Medicare is a government program that benefits not only the recipients, but the health care industry that it subsidizes.  This is a significant fraction of the workforce, including many high income people.

The mortgage interest deduction is a government program that benefits not only all homeowners, but the residential construction industry that it subsidizes.  This includes many high income people.

The proper analysis is that everyone benefits from government, an enormous degree, and the richer you are the more you benefit.  This is because it's not really possible to become rich without a government in place to protect your assets and facilitate the organizational structures that allow you to extract disproportionally from the community wealth that the government defends from external raiders.

Does anyone happen to know what the age threshold is right now? If it's only 5 years until the majority of children under 18 are minorities, it seems like there should already be a couple years where there were more minority babies than white babies born.

We pay into social security and medicare. That's not the government taking care of us.

Somewhere out there, a humble man named Mitt Rmoney is walking on his hands.

My understanding is that unemployment is an insurance program, not an entitlement program.

What does the author mean by benefit?
To benefit, one would have to receive more in benefits that one pays in taxes. If that's not the case, you are better off with not taxes and no benefits...