I know, I know. We can expect nothing more from the Daily Mail.  And yet I can’t help but point out this scintillating article on what tennis player Roger Federer wore at the Australian Open.  An article on what a man was wearing, you might ask?  Indeed.  What might prompt such an abnormality?  Well, you see, Federer was wearing just the slightest bit of pink. 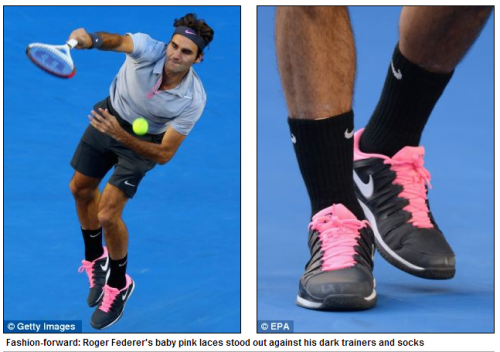 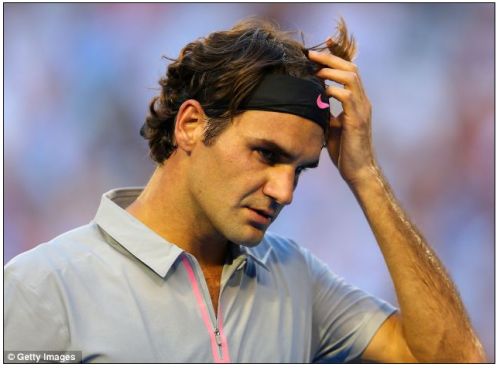 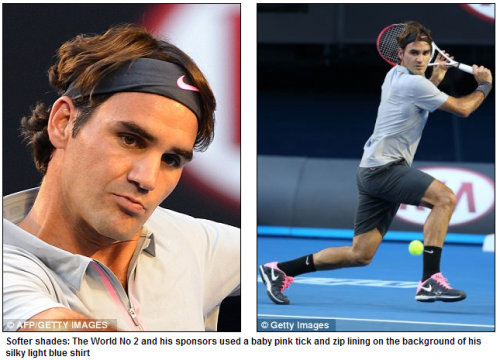 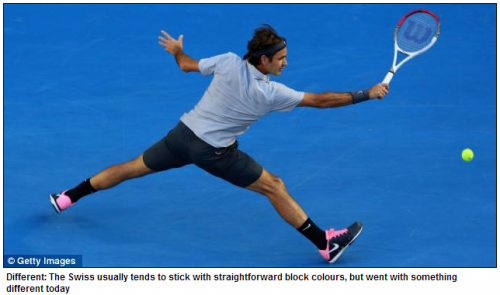 Now this isn’t a big deal, but it is a particularly striking example of the little ways in which rules around gender are enforced.  Federer took a risk by wearing even a little bit of pink; the Daily Mail goes to great lengths to point this out.  He also gets away with it, in the sense that the article doesn’t castigate or attempt to humiliate him for doing so.

Federer, however, is near the top of a hierarchy of men. Research shows that men who otherwise embody high-status characteristics — which includes being light-skinned, ostensibly straight, attractive, athletic, and wealthy — can break gender rules with fewer consequences (see also, the fashion choices of Andre 3000 and Kanye).  A less high-status man might read this article and take note: Federer can get away with this, kinda, but I should steer clear…. and they’re probably right.

If you follow tennis, you know that Federer has long gotten attention for what he wears at tournaments. He always wears custom-designed shoes. One design famously had real gold incorporated. And he has his custom "RF" logo on everything. He has also worn a custom blazer on the court that garnered quite a bit of attention.

Do you suppose it's coincidental that those photographs all show him looking rather dark for an ostensibly "white" person?

I think it actually goes full circle. A man might wear pink (or otherwise flaunt a masculine norm) as a signal of his unusually high status -- that is, as a demonstration that he can get away with it.

...And, of course, there's the maglia rosa, awarded to Giro d'Italia race leaders since 1931.

"A less high-status man might read this article and take note: Federer can get away with this, kinda, but I should steer clear…. and they’re probably right."
Why might they think that they should steer clear? Like you point out, the article doesn't even evaluate what happened, just notes that it's out of the norm.

Year after year, I've watched the "manliest men" in our culture (pro football players) wear hot pink every game. Of course it insulates you from criticism if you're also being smashed to the ground by a three hundred pound dude, but I don't think the message it sends is "we do this, everyone else steer clear." The message I get is, "this is ok for everyone now."

And maybe that's because I'm a naive liberal, but what I really think is that the culture is changing, and it's kind of bothering to me to have this random article about a fashion anomaly (which it is) interpreted as telling men it would not be acceptable for them to wear something unique (try GQ for something like that).

Hell, this article is practically a Nike promotion, and I'd be surprised if it didn't ENCOURAGE men to wear pink.

And yet, no one notices the real fashion offense of calf high socks with shorts.

To be honest, I see a lot more consequenses leveled at high-status men (as in, men in very visible, high status fields, as opposed to men who are simply wealthy but people take no particular note of) than at average guys.  When I was in high school, not very long ago at all, wearing a pink shirt, or pants with pink detailing, was very popular with boys and young men, especially those who embraced "preppy" fashion, and from what I've noticed, while it's less trendy than it was 5-6 years ago, it hasn't fallen so far out of fashion that finding a pink men's polo would be difficult.  High school is hardly a safe haven for mockery of clothing or perceived homosexuality, but that particular choice would not paint a boy as a target.  "Real men wear pink" was a logo on t-shirts all over the mall in stores like Hot Topic, so it wasn't confined to just the kids who dressed exclusively from Ralph Lauren either.  In very "preppy" circles, it has not gone out of fashion at all with men who wear bright color at all.

Plus, I don't buy that posting a thousand pictures of a high profile, successful man that women consider attractive wearing something says to average men that they can't get away with it.  That may be the intent of the Mail article (wouldn't be surprised), but that's not how young consumers operate.  If a famous person who could even distantly be deemed a sex symbol wears anything usual, the result is usually "if I run out and buy it, maybe my image will come off as similar to theirs."  When I was a kid, young girl's fashions were dominated by relatively modest clothes...until Britney Spears' Bellybutton became a celebrity completely independent of it's owner, and suddenly there were tube tops in every store and middle schoolers were getting their navels peirced.  When rappers and male singers started to wear suits and polos and skinny jeans, teenage boys abandoned baggy pants and baseball caps for more "polished" looks.  If this has any effect on the average dude at all (honestly, this is such a minor thing that I doubt anyone will actually notice unless they read the Mail article), it's that stock in black and pink Nike headbands will go up.

I think the dynamics behind this may have been misconstrued. The message here is not about Federer, but about Nike. Federer is paid a lot of money by Nike to wear what they tell him to wear. Now, Nike may wish to promote the colour pink as an option for males (high-status or otherwise) but they are more likely to want a splash in a newspaper. I would be very surprised if the source of the photos and the comment was NOT a Nike press release.
It would be better to understand the choice of pink as a deliberate marketing ploy, exploiting naive gender stereotyping - that, after all, is what marketing does. This isn't even a new or original technique. Stade Francais have been wearing a pink strip for years, and Cardiff Blues have a change strip of baby pink. The motivation for this is explicitly to generate pubicity by juxtaposing steeotypes. And this blog post is an example of its success.

Federer, however, is near the top of a hierarchy of men."
Apparently I missed the memo.  Lisa, do me a favor please; list all the people that are better then your average joe.  Thanks!

I'm not sure whether I agree with this research or not since no research information was cited and I haven't read any research on this topic. But I'm struck by the inclusion of "light skinned" in that listing of high status characteristics.

Also, although I don't think she meant this, Lisa's jutapositioning of a link to the article about Andre 3000  and Kanye West might be interpreted by some to mean that she thinks that Andree 3000 and Kanye West are light skinned.  I think that most African Americans would consider them to be "brown skinned" - neither light [brown] skinned or dark [brown] skinned. Another referent that African Americans have used is red boned. Andre 3000 might fit that description, but I'm not sure of that being relatively unfamiliar with that celebrity. As to whether they are attractive or not, well... yes... but attractiveness is in the eye of the beholder.

The original article has such a lingering attention to minutia that it
reads like an Onion article. It's worth noting that the Daily Mail has a
habit of churning out copy to justify printing pictures of celebrities
and "celebrities" alike for the purposes of their reader's oogling. Kind
of refreshing that they'd give that sort of attention to a grown man
rather than their usual target, fifteen year old girls.

What's the big deal about wearing pink? Here is a picture of a competitive cyclist wearing pink 30 years ago. http://flic.kr/p/7DJyVr

To be fair, the Daily Mail write a LOAD of nonsense, they might well have written the same article if he'd had orange laces. Their stories tend to be utterly bizarre and without merit.

[...] never thought about before. Although pink has been used negatively in men’s sports, and male athletes wearing pink is newsworthy in some mainstream media outlets, is it really that emasculating for male athletes to wear a color [...]