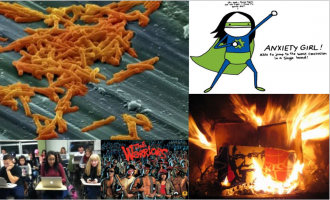 No, there aren’t a lot of reasons to reference “The Warriors” on the Editors’ Desk. I could spin some, sure: it’s a cool cultural relic; the various gangs all try on personality and self through costume and affiliation; it involves crime, deviance, and social movements, etc. But really, I just wanted to ask Cyrus’s great rhetorical question, “Can you dig it?” Just as the Moon Runners and the Van Courtland Rangers can come together, so, too, do educators, researchers, policy makers, students, and wonderfully interested and curious people from the public here on TSP. And we definitely dig it. After the clip, check out some of this week’s latest and greatest from around the site. Hope you have as much fun reading it as we do making it.

“Halving it All,” by Lisa Gulya. In which sociologist Michael Kimmel takes to CNN.com to rebut the latest in “war on men” rhetoric.

“Supersize and Unionize,” by Andrew Wiebe. In which the New York Times takes notice of Fast Food Forward, a movement to unionize low-wage workers.

“Big Contradictions,” by Kia Heise. In which Laura Backstrom looks at two reality TV shows to get at the differences in presentations of body size—and blame—in popular media.

“Guest-Speaker-Tweeter,” by Hollie Nyseth Brehm. In which educator Mary Chayko invites Cyborgology’s Nathan Jurgenson to join her class as a guest-tweeter and shares her classroom social media use policy in the comments.

“The Prospects for Reducing Poverty Are Dismal—Unless America’s Leaders Change Course,” by Sheldon Danziger. Why doesn’t a rising tide lift all boats in today’s economy?

“Beyond Class War: Americans Want Government to Promote Equal Opportunity,” by Lawrence R. Jacobs. Americans hold tight to the conflicting values of individualism and interdependence; they hope, idealistically, for a country in which everyone earn and achieve, but they also clearly understand that the playing field is far from level.