In 2011 the U.S. birth rate dropped to the lowest ever recorded, according to preliminary data released by the National Center for Health Statistics and reported by Pew Social Trends: 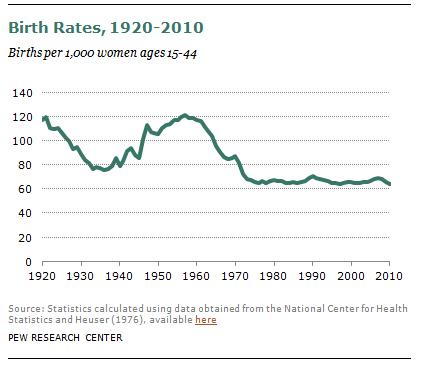 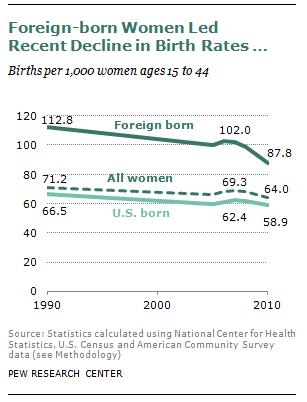 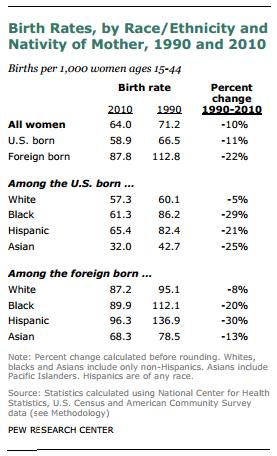 It’s easy to forget that effective, reversible birth control was invented only about 50 years ago.  Birth control for married couples was illegal until 1965; legalization for single people would follow a few years later.  In the meantime, the second wave of feminism would give women the opportunity to enter well-paying, highly-regarded jobs, essentially giving women something rewarding to do other than/in addition to raise children.  The massive drop in the birthrate during the ’60s likely reflects these changes.

In addition to a drop in the number of children women are having, this data reflects a steady rise in the number of women deciding not to have children at all.  The decision to eschew parenting altogether is disproportionately high among highly educated women, suggesting that the there-are-now-other-things-in-life-to-do phenomenon might be at play.

Many European countries are facing less than replacement levels of fertility and scrambling to figure out what to do about it (the health of most economies in the developed world is predicated on population growth), the U.S. is likely not far behind.

Since when are non-pharmaceutical methods of preventing pregnancy not 'birth control'?

Rhythm method, abstinence, withdrawal, condoms... they may not be even remotely as effective as modern pharmaceuticals, but they are significantly better than nothing. (~25% annual failure rate, compared to ~10% for oral hormonal treatment and ~85% for no method), according to The Johns Hopkins Manual of Gynecology and Obstetrics.

It irks me to no end that you should suggest the "there-are-now-other-things-in-life-to-do phenomenon" might be the prime mover for fewer highly educated women deciding to have children without at least giving equal time to the "gee-I-spent-a-lot-of-time-getting-this-education-and-I-face-discrimination-for-having-children-that-my-male-coworkers-don't-plus-it's-a-lot-harder-to-find-a-guy-willing-to-be-a-stay-at-home-dad-and/or-if-I-delay-childbearing-to-pursue-a-career-I-might-run-into-fertility-issues" phenonmenon.  Not saying that more women don't choose to forgo motherhood because they have other options open to them, but let's not kid ourselves -- plenty of women also don't feel that they can have both a successful career and a family.

According to the book Outliers, doesn't this mean that kids born during these low birth rate years will have more advantages because there will be less competition for things like education?

In this article it is well-demonstrated that the birthrate
in America is on a downward trend.  Among
the reasons stated were increases in birth control use among married couples as
well as single women and the addition of education and career paths provided by
second wave feminism augmenting the purpose of women’s lives.  Interestingly as women are becoming more
highly educated it might be worthwhile to explore other topics that might
influence women to abstain from having as many children or any children for
that matter.  Especially for highly
educated women, they might see having too many children as an irresponsible choice
for many reasons.  One reason could be
that they are financially incapable at the time to have children.  Although they may be biologically and
cognitively prepared to have children, due to stagnation in wages they feel as
if they are economically ill-equipped to raise a child.  When they do feel ready to raise children they
may opt instead to adopt children or only have one biological child which
lowers the birth rate.  Another reason,
although it is a little far-fetched, is that highly educated women may be aware
of the environmental threats of overpopulation in regards to pollution, global
warming, etc. and decide that by having fewer kids they are reducing their
effect on the environment.  Although
environmental advocacy is not always a hot-button issue, as population
continues to grow it might become an increasing reason to limit child birth.

It's interesting that, in this discussion, we mostly focused on women who choose not to have children, rather than on the fact that mothers are having fewer children. It's much more normal now to have only one or two kids, and more exceptional to have more than four. This trend probably has a much stronger bearing on the birth rate decline than the number women opting out of motherhood.