What Happened to the Oldsmobile?

Try not to think about an Oldsmobile.

I’ve been thinking about Oldsmobile.  I mentioned it in passing in the previous post, and since then I’ve been wondering about “Not Your Father’s Oldsmobile” – the brand’s swan song.  Matthew Yglesias at Slate thinks that the campaign alienated the regular customers, the ones who bought a new Olds every few years, saying to them in effect, “You’re a geezer, an Oldster, and have been for a while – sans youth, sans sex, sans taste, sans everything except your crummy car.” 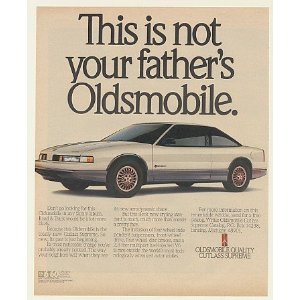 The tag that completed the famous set-up line was, “The new generation of Olds.”

The target of the campaign was to attract young car buyers, but it missed badly.  Why?  My guess is the futility of negation.  Saying what something is not doesn’t give people a clear picture of what that something actually is.  But that’s not the problem here.  The message was clear, especially with that tag about generations.

The problem is that direct negation can reinforce the idea you are trying to deny – as in the paradoxical command to not think about an elephant. “I am not a crook,” said Richard Nixon in his televised address about Watergate.  It’s his most remembered line, and when he spoke it, the TV screen might as well have had an overlay flashing the words “Game Over.”

If the denial contradicts general perceptions (i.e., the brand), people might not hear it at all, or worse, they might hear the opposite.  Ever since fact-checking went public in a big way a few years ago, we’ve seen corrections to the lies that politicians have told about one another.  But as Brendan Nyhan and Jason Reifler have shown, corrections can boomerang, especially when they clash with ideas the reader already has.

By insisting that they weren’t old after all, Oldsmobile might have done more harm than good.

that's one interpretation. another is they were just flat out sucky cars.

Olds actually " WAS " your father's Oldsmobile. It had been for decades. Olds were bought by older, conservative, graying in the hair buyers. That was the bread & butter market. When this is not your father's Olds came out their market went to Buick, Mercury & Chrysler.