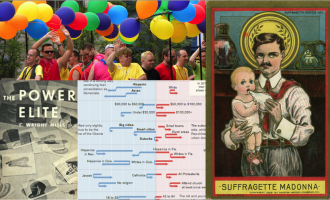 After last week’s flurry of activity, perhaps a rush to get information to our eager readership (indulge me here) before the American general election that’s now just a few days past (unless you happen to live in Florida), things at The Society Pages have returned to a more reasonable, measured pace. That isn’t, however, to say we’ve gone slack; indeed, this week has brought a broad look at the underpinnings of and possible challenges to power, alongside thoughtful teaching activities and solid advice on just what color tracksuit your dog or cat might require. There’s a lot going on—have a look!

“(Reading) Listomania,” by Chris Uggen. In which the editor explains the process behind our popular Reading List and wonders why anyone would join “Team That Other Guy.”

“The Island of Life,” by Hollie Nyseth Brehm. In which our graduate student editor reads the New York Times, discovers her lifelong purpose, and buys a plane ticket to Ikaria.

“Using Political Commentaries to Teach Contentious Issues–Marriage Amendment Activity,” by Kia Heise. In which a Sociology of Family instructor brings a political hot potato into her classroom and lives to tell the tale.

“Sociology in the News,” by Hollie Nyseth Brehm. In which Brehm demonstrates one way to get a classroom thinking like our Citings & Sightings team.

“Why Does U.S. Politics Tilt Toward the Wealthy?” by Lisa Disch. The 2012 campaign cycle is estimated to have cost nearly $6 trillion across all races. Do you need money to hold power?