Last spring I posted a map of the legal status of same-sex marriage in the U.S. Given the results of the election, it’s time to update that map.

Greg Stoll posted an interactive map that lets you look at changes in in statutes regarding same-sex marriage from 1990 to now. On Tuesday, voters in Maine and Maryland approved referendums legalizing same-sex marriage, reaffirmed marriage equality in Washington, and defeated an effort to put a ban on same-sex marriages in the Minnesota constitution. That makes this this first time same-sex marriage was legalized by voters, rather than a legislature or the courts. (NOTE: As a reader pointed out, there’s an error in the map; Maryland should be colored blue now.)

Here’s the current map, with blue states having full marriage equality and red states banning both same-sex marriage as well as civil unions in their constitutions: 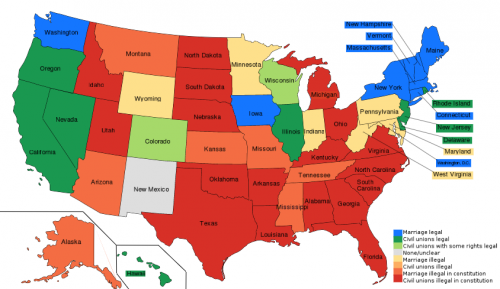 That map still isn't up to date, unfortunately. It shows Maryland as "Marriage illegal."

Why did Washington and Maine get updated but Maryland didn't? Booo! We passed marriage, too! ;P

So why is Maryland still yellow?

Don't forget Maryland, or do you know something I don't know?

I'm having some difficulty reading the colours. Are there any states in which civil unions are illegal?

The Maryland Yellow deal is because the new law does not go into effect until January 2013.

The most exciting part of this change is that they actually passed by public vote! Previously even in blue states the best anyone could get on marriage was all by judicial ruling. Go Maine, Washington, and Maryland!

This is a bit deceptive, because the categories aren't mutually exclusive. California, for example, has both domestic partnerships and a constitutional amendment banning same-sex marriage Better maps come from the National Gay and Lesbian Task Force. They have two maps--one with relationship recognition laws and the other with anti-marriage laws.

"On Tuesday, voters in Maine and Maryland approved referendums legalizing same-sex marriage, reaffirmed marriage equality in Washington, and defeated an effort to put a ban on same-sex marriages in the Minnesota constitution."

Wow, voters in Maine and Maryland did all that!?

Thanks for the link! For those asking: Maryland isn't blue yet because same-sex marriage isn't legal until January 2013. And on the interactive map, you can click on a particular color on the legend to have all of those states blink. (there are indeed many states where civil unions are illegal...)

1. Married gay and lesbian couples from Iowa cross border to Nebraska and marry opposite sex partners.
2. Hop back and forth across the border until tired of changing marital configurations; in some states you were already married, in others you were single and are now married to someone else.
3. Go home, live life as usual.
4. Make the IRS sort it out come April.

I think it's impressive that we're finally moving towards marriage equality, albeit very slowly. However, the fact that such a simple right needs to be voted on is ridiculous. The patterns on this map are so interesting though. The fact that the conservative south has taken so much action against marriage equality is no surprise, and the fact that the upper east coast has taken so much action in favor of it is also no surprise. I always find it funny, however, that a state is willing to legalize civil unions, but not marriage altogether.

Your listing for Wisconsin is wrong. We should be red - our constitution bans civil unions since 2006.  Not sure where you got that info, but it's extremely incorrect.

thoughts on traveling while gay-married | the feminist librarian — August 29, 2014

[…] marriage equality map;click through to Sociological Images for high-res […]