Quote of the Month Club, September 2010

Economists have an interesting relationship to the empirical world. You’ve probably heard the one about the economist walking down the street with a friend and noticing a $100 bill lying on the ground. As the friend bends over the pick up the bill, the economist says, “Don’t bother—if it were a real $100 bill, someone would have picked it up already.”

So when an economist starts talking about empirical support for a theory, it’s sort of a special occasion. Thus the Quote of the Month selection for September:

“…there is no other proposition in economics which has more solid empirical evidence supporting it than the Efficient Market Hypothesis.”

It probably goes without saying, as we approach the two-year anniversary of the Great Crash of 2008, that Jensen’s comment hasn’t worn well over time. In fact, anyone who has been paying attention to the last 30 years in the stock market is going to have a tough time accepting the Efficient Markets Hypothesis, which asserts that market prices fully reflect all available information.

Where was the EMH when the skeletons of the subprime mortgage crisis started to fall out of the closet? Let’s mosey on back to July 2007 to see.

That month, Fitch, Moody’s and Standard & Poors all lowered their ratings on mortgage-backed securities—an ominous sign after months of troubling data from the housing market and lenders like Countrywide Financial.

At the same time, the Dow Jones Industrial Average was hitting a new record high of 14,000. Remember Dow 14,000? So what information was the market reflecting, exactly? Maybe this: 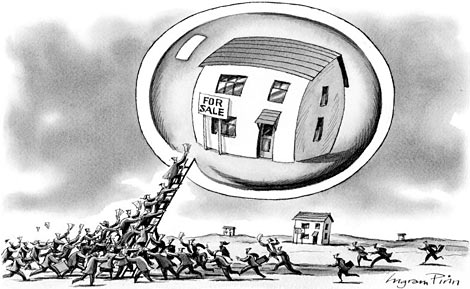 And yet, such is the stature of economics and economists—whom the brilliant Keith Hart calls the “high priests” of contemporary capitalism—that no one has the nerve to call bullshit on the EMH.

No one, that is, except the Sage of Omaha, to whom the following observation is attributed: “If the EMH were correct, I’d be a bum in the street with a tin cup.”

Pithy smackdowns: just another reason that Everybody Loves Warren.

Here's mine: "If the EMH were correct, I'd be an economist with a good salary."

In 2005 I was pretty late in choosing the topic of my undergraduate (BA) dissertation, so I got lumbered with testing the Efficient Market Hypothesis on the UK stock market. As it turned out, first of all, without a bunch of non-testable assumptions you can't actually test the EMH. Second, colder-than-average weather affected prices more than corporate earnings, at least in my regressions. And then, third, there was that yearly September boom which for some reason nobody was arbitraging away.

My professors consoled me that a bad dataset must be at fault, and rewarded my efforts with a good enough grade for Cambridge. Still, I believe that was the year I started thinking about sociology.