Fellow Contexts blogger Ron Anderson, aka the Sociological Eye (which sounds like a name for Philip Marlowe’s sidekick), invited me to guest-blog and requested that I address the impact of the market crash on investment clubs. This is the result. Turns out I had more to say than I initially thought possible! Blogging brings out my inner Proust.

Are you still cruising on an Obama-related endorphin surge? Wallowing in the afterglow of Inaugural optimism? This news story will snap you out of it like a cold shower:

MOUND HOUSE, Nev. — A downturn in the economy means an upturn in applications to some brothels.

A brothel owner says his industry’s resilience is attractive to many who are out of a job.

“There’s so many girls wanting to go to work because of the economy,” Dennis Hof, the owner of the Bunny Ranch says. “There’s layoffs in every sector of the economy… We get a lot of people from New York City wanting to come to work.”

“Air Force Amy” has been in the business for 19 years. She says she has seen a change in the types of woman applying for employment.

“We do see ladies with a great education, Masters degrees. And woman from all walks of life,” according to Amy. “It’s lot different from 20 years ago where it was just a street hooker from under the bridge. It’s a totally different ball game now.”

Sweet! Now the US can boast some of the most well-educated prostitutes in the world. In your face, Thailand!

If it weren’t so sad–at least to this female with a master’s degree, who’s thinking “there but for the grace of god go I”–the story would provide hours of entertainment. The potential for hideous puns seems virtually limitless, starting with the name of the city in the byline: Mound House. (Cue snickering by Beavis and Butthead .) It rivals even the mock-worthiness of Rudy Giuliani’s “welfare-to-work” program, which trained unemployed New Yorkers to read Tarot cards in preparation for glittering careers as “Psychic Hotline” operators. But I have Important Sociological Points to make, so the punning will be left as an exercise to the reader.

Being sarcastic provides me with a welcome–albeit temporary–distraction from this extremely depressing reminder that while America can elect a black man President, it can’t do much better by its female population than 18th century England once did. I’m referring, of course, to the series “A Harlot’s Progress,” by legendary engraver William Hogarth, which traces the sad fate of an innocent country girl who comes to big city–London–seeking employment. Instead of finding the work she’d sought–as a tailor or a maid–she ends up as a prostitute and dies in squalor shortly thereafter, of venereal disease.

Allow me to digress for a moment, in order to acknowledge the people who claim prostitution is an “empowering choice” for women–a job, just like any other, except that it pays better than most employment held by women (i.e., waitress, retail clerk, etc.).

There are many reasons to be skeptical of this argument, including the ways that current and former sex workers describe their experiences of and feelings about prostitution in first-person accounts. A post on the blog LuckyWhiteGirl.com expresses some other reasons for skepticism about the “benefits” of prostitution for women:

…[such] approaches argue that “prostitution is one of women’s best economic choices.”  It pays well.  And that’s a good thing, they say.  But we have to ask why is it one of our best choices?  Why are our bodies the most valuable possession we have as women?  Getting more money isn’t the end all and be all of liberation. It’s a pseudo-liberation.  It is not full liberation if it preserves the underlying structure of inequality which exists under the global capitalist system we have today.  There’s something inherently wrong with a system that makes women’s bodies their most valuable possession.

Right. Which leads back to the classic question for economic sociology: how do humans assign value to things, like human bodies, or pieces of artwork, or cars?

My point: Why is prostitution still the default job for women, particularly in the United States, which boasts some of the finest universities and highest per capita incomes in the world? If we have the resources to educate women so well, to endow them with so much human capital, why can’t they translate that into economic capital (i.e., wages and salary) as effectively as men? After all, men have the physical ability to earn money for sex–why isn’t prostitution the last-resort job for most of them, as it is for most women?

To put it simply, men have more choices in the labor market than women. That doesn’t mean that men have it “easy” or that they don’t suffer from un- or under-employment. But it does mean that when men can’t work in the occupation of their choice, their alternatives are much more varied and appealing (economically as well as socially) than those facing women. As this chart from a 2007 United Nations report shows, while the United States is still leading the world in wealth and opportunity, those assets are so highly concentrated in the hands of men that even the poorest countries in the world do a better job of allocating resources fairly. Simply put, the left-hand column of the table shows that American women get about the same share of their country’s resources as women in Bangladesh and Zimbabwe; while the Americans’ share may be much larger in absolute terms, their position relative to men is as disadvantaged as that of women in countries that are barely functioning at all, let alone claiming to be the land of opportunity:

The human development index (HDI) measures average achievements in a country, but it does not incorporate the degree of gender imbalance in these achievements. The gender-related development index (GDI), introduced in Human Development Report 1995, measures achievements in the same dimensions using the same indicators as the HDI but captures inequalities in achievement between women and men. It is simply the HDI adjusted downward for gender inequality. The greater the gender disparity in basic human development, the lower is a country’s GDI relative to its HDI….Out of the 156 countries with both HDI and GDI values, 106 countries have a better ratio than United States’s.

Table 2 shows how United States’s ratio of GDI to HDI compares to other countries, and also shows its values for selected underlying values in the calculation of the GDI. 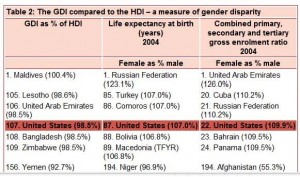 What’s shocking is that education–human capital development, in sociological parlance–is supposed to broaden one’s opportunities, regardless of gender, race or age. On this basis, many people have fought long and hard for equality of educational opportunities in the US (e.g., Brown v. Board of Education). But it turns out that the “return on investment” in human capital is entirely different for women versus men, whites versus non-whites, and so forth. So, all other things being equal, a woman won’t get the same labor market benefit (i.e., salary, status, advancemet opportunites) from a master’s degree as a man will.

Unfortunately, President Obama’s plans for the economy are likely to exacerbate these problems. His economic jump-start program will create lots of new jobs–but almost entirely in occupations dominated by men, like construction. What about reversing the trend, to inject some distributive justice into those plans? This would be a great time to rebuild the country on a more equitable basis. That’s change we still need.

Film Club: the Gospel According to “Repo Man”

The cult classic film “Repo Man” turns 25 this year, and I’d like to mark the occasion by quoting this exchange between two of the lead characters. The context here is the moral justification for taking away people’s cars by stealth and subterfuge–an activity that looks very much like simple auto theft–when those people fail to make their contractual payments. According to Bud, the wizened Yoda to Otto’s Luke, repo work not only isn’t “stealing,” it’s a blow for justice and the American Way::

Otto: They don’t pay bills in Russia, it’s all free.

There’s something poignant now, even charmingly retro in the post-apocalyptic financescape of 2009, about the phrase “Credit is a sacred trust.” It seems to belong to another world.

Former Federal Reserve Chairman Alan Greenspan might have been thinking of Bud when he said in a 1990 commencement address at Harvard College,

Trust is at the root of any economic system based on mutually beneficial exchange. In virtually all transactions, we rely on the word of those with whom we do business…If a significant number of business people violated the trust upon which our interac­tions are based, our court system and our economy would be swamped into immo­bility.

Prophecy, or just a gloss of the Gospel According to “Repo Man?” You decide.

As for Otto’s utopian vision of the Russian socio-economic complex, credit cards and cowboy capitalism put an end to all that. For an excellent account (no pun intended), see Prof. Alya Guseva’s recent book, Into the Red (Stanford University Press, 2008). 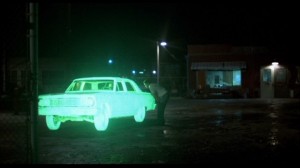 Anyone reading this blog is probably aware of the LOL-fad: the addition of witty captions to photos of cats, fashion models, and so forth, which has taken th’ interwebs by storm.

So in a moment of inspiration, I wondered: why couldn’t we do the same for economic sociology? I mean, I know I’m not the only one who spontaneously thinks of puns that mash up pop culture with “The Great Transformation,” right? Right? [Tap, tap, tap.] Is this thing on?

If the blogosphere is good for anything, it’s for allowing microscopically small interest groups to band together and share the kind of thoughts that would be greeted with disbelief or incomprehension by others. If the Ferret Fanciers of Greater Milwaukee can do it, why can’t economic sociological punsters?

Rather than keeping those gems of humor to ourselves, let’s enjoy them together. Friends, Romans and economic sociologists, send me your LOLs!

Here’s one that came to me when I ran across this picture of the Angel of Death during the earily days of the market meltdown–I know you can do better! So send in YOUR LOLpix! Operators are standing by!

“Talk to the Invisible Hand!”

I knew someone was on this…ladies and gentlemen, I give you LOLFed.com, the funniest site I’ve seen in ages. Here’s today’s LOL with a snippet of the accompanying text:

This one’s for all you crazy kids out there who said Sandy Weill’s experiment of creating a banking supermarket could never work, that its sheer size and the scale and multitude of services offered under a single roof were unsustainable, that no one management team or board of directors could possibly oversee its many arms. You were absolutely right!