After a brief hiatus, Quote of the Month Club is back from summer vacation with this gem from POTUS #33, Harry S. Truman:

It’s a recession when your neighbor loses his job; it’s a depression when you lose yours.
—quoted in the Observer magazine, 13 April 1958

Old Harry knew a thing or two about recessions, having lived through over a dozen by the time he made that comment in the Observer.
In fact, if you are inclined to take consolation in history, you may enjoy this chart from the National Bureau of Economic Research, listing all the recessions that occurred in 20th century America. Should you be feeling glum about our current crisis—now in its 23rd month—check out what was happening a century ago: in 1910, the US was entering its second 23-month recession in a decade! Between 1902 and 1912, the American economy spent a total of five years in the dumps. Ouch. 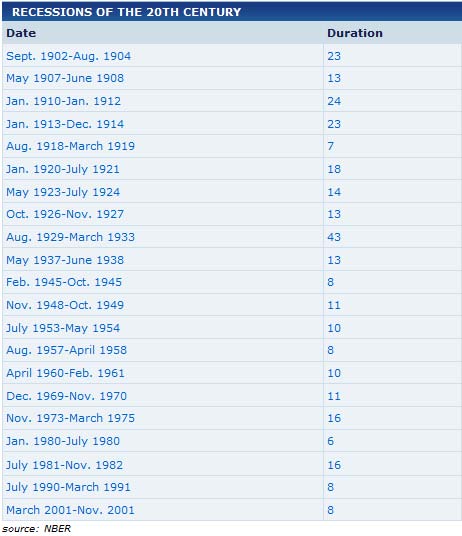 This has been a public service announcement from the “it could be worse” school of crisis management. Our motto: “When others think they’ve hit rock bottom, we start digging.”