The Lady and the Tiger: A “Sociological Experiment” 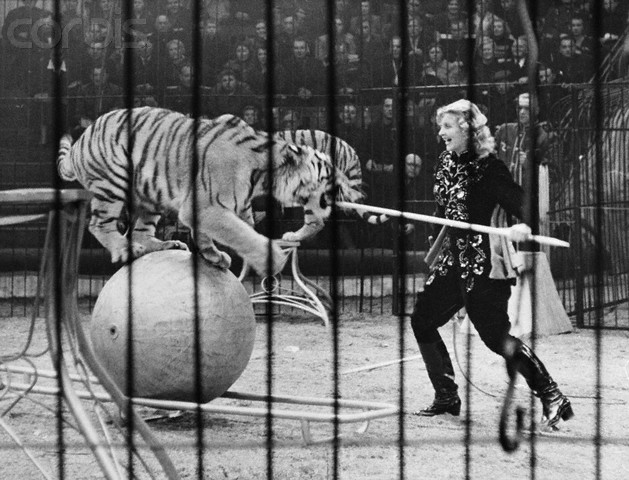 Once upon a time, the phrase “The Lady or the Tiger?”–taken from an 1882 short story of that name–was a byword for impossible choices. The story took place in a mythical kingdom where justice was dispensed through the workings of chance. The accused were presented with two identical doors behind which awaited opposing fates: one concealed a hungry tiger, who would immediately devour the accused, while the other concealed a beautiful woman, whom the accused would have to marry on the spot. This doesn’t present a problem until the accused man is the lover of the King’s daughter; when the lover asks the princess for a hint as to which door to choose, she has to decide whether she’d rather see him dead or married to another woman. The story ended without the author revealing the princess’ choice or the lover’s fate; the unresolved puzzle thus secured the story’s role as a topic of speculation and “thought experiments” for generations to come.

This is by way of prologue to the economic sociological news that an American woman was recently offered a live tiger in exchange for her virginity. Now the woman has been running an auction for her virginity since September, so the offer didn’t come entirely out of the blue. But still, the offer of a live tiger (by a zookeeper in an undisclosed location) is incomparably bizarre.

It’s also deliciously ironic, in that it brings “The Lady or the Tiger?”  into a 21st century Western context, in which everything can be legitimately and publicly commodified so that there is no longer an irreducible opposition between lady and tiger. Instead, they are being offered as equivalents for exchange. Reduction of everything to a price tag puts everything up for grabs, and everything on an equal footing.

I stress the legitimate and public commodification of virginity, because of course, intact hymens have been put on the auction block for hundreds–perhaps thousands–of years. It still happens openly all over the world: Nick Kristof of the New York Times has done an excellent series on the selling of young Vietnamese girls (by their own families) into sex slavery in Cambodia. It even happens in the US, albeit under cover; since selling other people’s bodies is against the law, we only hear about it when there is a criminal investigation or a dramatization, like those surrounding the Fundamentalist Church of Latter Day Saints.

But what if you want to sell your own body? And what if you want to define it as an act of free market rationality–“I have something of value, and I should be compensated for it.” Or how about framing the sale of one’s hymen as a feminist act, by keeping the profits rather than having them expropriated by men or older women, as was the fate of Moll Hackabout (see below)?

These are precisely the ideological claims of the lady–one Natalie Dylan, aged 22, of San Diego–who is being offered a live tiger in exchange for being sexually penetrated for the first time. Dylan’s reasoning, in her own words, is as follows (the phrases in boldface are my emphasis):

And the value of my chastity is one level on which men cannot compete with me. I decided to flip the equation, and turn my virginity into something that allows me to gain power and opportunity from men. I took the ancient notion that a woman’s virginity is priceless and used it as a vehicle for capitalism…  And for what it’s worth, the winning bid won’t necessarily be the highest—I get to choose.

Bidding for this prize was up to a reported $3.8 million earlier this month. Natalie’s ability to construct a narrative of empowerment and autonomy around the auction stems in part from her training in Women’s Studies, in which she received an undergraduate degree from Sacramento State University. She says the auction started as a “sociological experiment” on the value of virginity, as well as a practical means of raising money to fund her graduate studies in marriage and family therapy. She was inspired in part by her older sibling, Avia, who earned enough in three weeks working as a prostitute at Nevada’s Bunny Ranch brothel to put herself through graduate school. Sisterhood is powerful!

So Dylan presents herself as a feminist capitalist, extending the logic of the market to an extreme that only slightly surpasses what Madonna and other female “entertainers” have been doing for decades. Dylan adds that she has been praised for her “entrepreneurial gumption” by an unnamed Fortune 500 CEO–a claim I have been unable to verify independently. However, I wouldn’t be surprised if it were true, given what Frankfurt School sociologist Jürgen Habermas calls the creeping “colonization of the life-world” by capitalism, in which “systemic mechanisms –for example, money – steer a social intercourse that has been largely disconnected from norms and values.”
Habermas means that concepts, values and modes of thought associated with the market have intruded into daily life to such an extent that individuals become increasingly unable to think–or act–outside the hegemonic system. Everything gets (re)packaged in market terms–that is, everything is (eventually) assigned a price. This impoverishes our world and our relationships, as if we eliminated words, images and gestures from our communication, and replaced them instead with number systems like binary or hex. More “efficient” and “precise”? Possibly. But can those qualities really be traded off against the powers of allusion, metaphor, and symbolism?
Habermas’ ideas have their roots in the work of founding sociologists, like Karl Marx (who wrote of the “internal colonization” of humans by capitalist ideology) and Max Weber, who observed the competing relationship between value-rationality (in which entities can be measured on their own terms, and cherished for their own sake) and instrumental rationality (in which entities are measured by their exchange value).  The increasing dominance of instrumental rationality is linked to the process of modernity, and it not only “flattens” the world by reducing everything to its value vis-a-vis something else (usually money), but it reduces our own autonomy as humans. As another contemporary social theorist put it in a recent essay,

The life-world, by and large, characterized by value-rationality, begins to be eclipsed and absorbed in instrumental rationality, making persons become means to political and economic ends not in their interest, nor under their control.

Herein lies the fallacy of Natalie Dylan’s empowerment reasoning, and–to be fair to her–the reasoning of the many, many men and women who make the same claims. Dylan and people like her have no real “autonomy” or “control” in the market system. According to Habermas, and to Kant, when you live in a world turned upside-down, where instead of socio-economic structures serving human needs, humans become subordinated to the systems, you have no means to mount an effective challenge. By profiting from the trophy status of her virginity, Natalie Dylan isn’t doing anything new–consider all the marriage markets, past and present, in which a woman’s ability to command a wealthy husband is contingent in part upon her intact hymen–and she’s certainly not subverting anything. This isn’t her fault, or a weakness on her part; it’s the human condition in what Max Weber would call modern, rational-bureaucratic societies.
This scenario differs from the plot of The Matrix only in that there is no cabal–no specific people or institutions–who can be overthrown in order to change the system. The horror of it all is that many people and institutions contribute, often unknowingly, to the commodification of themselves and others, making the system incredibly difficult to change. So Natalie Dylan isn’t “hacking” the system of women’s sexual commodification, nor is she going to alter it with her auction. Certainly, the process will change her, and from what I’ve read of her, she seem to both underestimate that change and overestimate her own power to control her experience within this colonized life-world.
While writing this post, I’ve been conducting a little thought-experiment of my own: what would I have done if Natalie Dylan had been my student? Answer: I would have tried to do what I aimed for with all the students I ever taught, which was to inform them, and show them how to think critically and clearly. I doubt that just discouraging her, or conveying my concern about the effects the auction might have on her, would have made much of a difference. And for a 22-year-old, even parental disapproval would likely be ineffective (though I’ve wondered how her parents responded–something I have not seen addressed in any of the news coverage).
So, had she been my student, I would have asked Dylan to do three things:

Perhaps none of these exercises would have changed Dylan’s mind. But I think we’d be hearing a lot less from her about empowerment. Instead of claiming “I’m seizing control of the commodification of women’s sexuality for my own benefit,” I imagine she’d say something more like, “I’m willing to enter into this corrupt and unfair exchange because it’s the only way I can make a fortune in a few months.” I’d prefer unpleasant accuracy to pleasant (self)deception any day. And maybe a more accurate perception of herself and her actions would lead her to do something positive, like donate proceeds of her auction to help the women whose trophy-virginity was taken without consent or compensation.