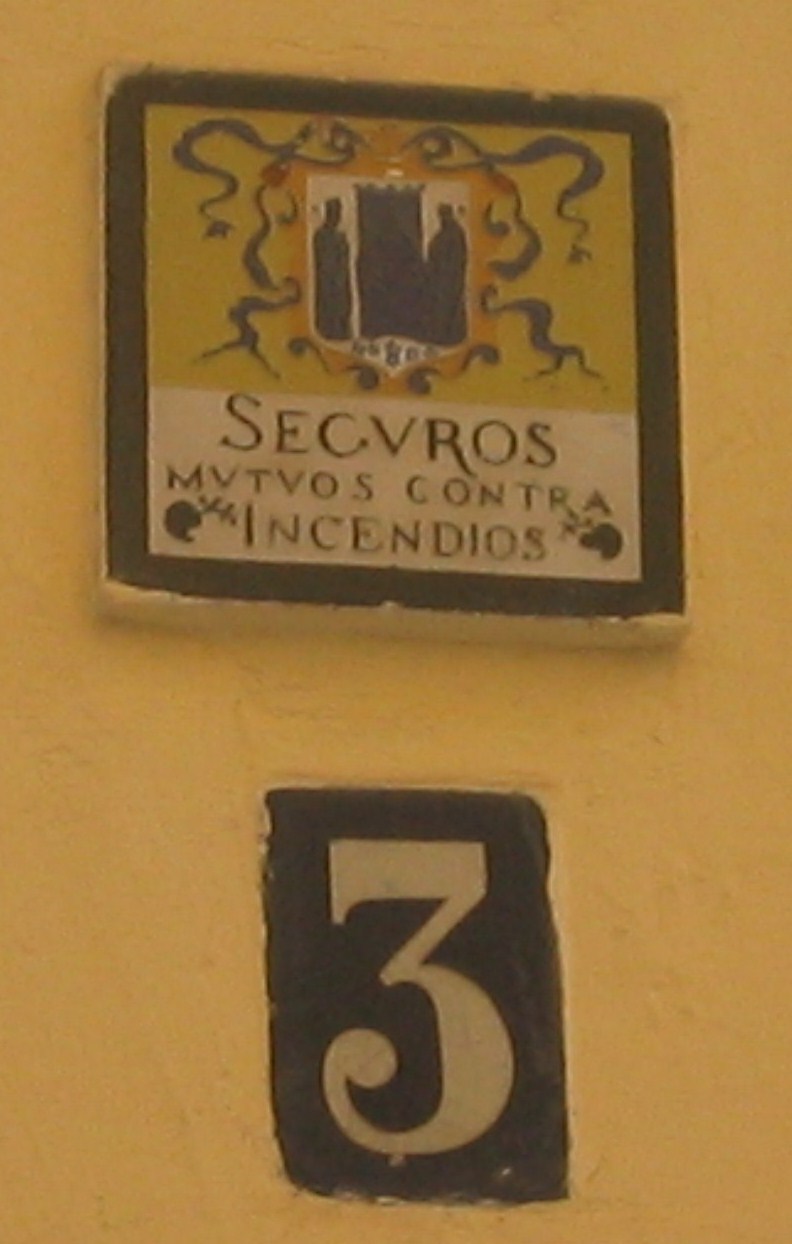 I snapped this photo of plaque over the front door of a house in Seville, Spain, because it records a Hobbesian state of socio-economic affairs: a world without public goods.

Used to be that there was no such thing as a public fire department. If your house was ablaze and you wanted help, you’d better have one of these plaques over your door, or you were SOL. If you wanted a fire brigade to come to your aid in such emergencies, you had to join a kind of club with private membership fees. It worked like this: you ponied up the fees, the club gave you a plaque to put over your front door, and then if fire swept through the neighborhood, the club dispatched help, but they *only* assisted paying members. So if you didn’t have that plaque over your door, the fire rescue teams would pass you right on by. It would not be uncommon to find that your house burned down while the one next door would be saved.

Sometimes, these clubs indulged in what laissez-faire economists might call “healthy competition.” This from Wikipedia’s entry on fire stations:

In many western countries, fire brigades were originally created by insurance companies to safeguard the property of their policyholders. Those who bought policies were given a plaque that would be mounted in a prominent position on the structure to denote its protected status. These plaques can still be seen on some historic buildings, particularly in the United Kingdom. Firemen summoned to burning buildings were expected to look for these plaques before fighting the fire. If the fire was in a building covered by a rival insurer, some brigades would deliberately obstruct that company’s fire brigade in an attempt to give rise to greater property damage (and subsequent expense to the insurer).

Some would call it savage and inhumane. Since the Reagan 80s, others have called it just desserts: if you don’t have the smarts or the money to insure yourself, then you must bear the consequences of not taking “personal responsibility.” And as we all know, privatization of public services has been such a rollicking success in domains such as:

Etcetera, etcetera, ad nauseum. Actually, privatization of public goods has repeatedly resulted in economic, social and ethical disaster (example: England’s 18th century Acts of Enclosure, or the privatization of France’s war debt by John Law), so why are we still talking about this?

That was a a rhetorical question. The answer is: because privatization makes some people incredibly rich.

In some US cities (Philadelphia for one, I think) these fire brigades were also basically street gangs. One gang might set fire to a building and then ambush the rival gang when it came to fight the fire -- yet another example of the benefits of unregulated, free-market competition.

Private fire brigades are cheaper than public sector ones, because you don't have to redistribute the money via government officials (less bureaucracy, less corruption). Personally I'd go with the private fire brigades and impose severe punishments on them if they try to start fires to make a profit.