A few editorial cartoons offering a counterpoint perspective to the cultural sentiments and media portrayals that denounce the Baltimore “riots” as politically unproductive, ethically unjustifiable hooliganism have achieved viral status.  One particularly prominent cartoon illustrates alternative histories in which once denied freedoms and equities were achieved without systemically disruptive uprisings (see image above).  In one panel an 18th century Haitian slave cordially informs a French Imperialist that he and his fellow slaves would rather be free.  The receptive overseer responding in an equally kind fashion decides to abolish the system of slavery that legitimizes his very authority.  In another panel an 18th century French revolutionary asks King Louis XVI to abdicate his power as well as dissolve the monarchy to make way for democratic rule and, like in the previous example, history is comically rewritten to suggest that the powers that be were enthusiastically and progressively responsive to such a request.  more...

#OpCharlieHebdo is a Terrible Idea 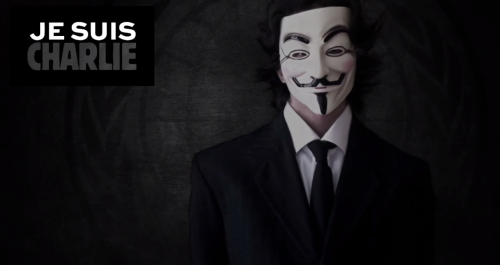 On January 9th, people donning the symbols of Anonymous promised a “massive reaction” to the shooting deaths of over a dozen people in Paris. Posted to YouTube and Pastebin under the hashtag #OpCharlieHebdo, Anonymous proclaimed, “It’s obvious that some people don’t want, in a free world, this sacrosanct right to express in any way one’s opinions. Anonymous has always fought for the freedom of speech, and will never let this right besmirched [sic] by obscurantism and mysticism.” Obviously what happened in Paris was a despicable act and I have little sympathy for the perpetrators but their actions weren’t random. What happened in Paris is the beginning of a fight between fanatics who hold polar opposite views on free speech and the battle lines being drawn are dangerously close to the ones that outline the War on Terror.  more...

There’s nothing particularly glamorous about Troy, New York. Troy is a city that, in an alternative universe, might have been a major metropolitan region. It stumbled early though, one of the first places to suffer the oxidation of the iron belt. What it lacks in size or elegance it makes up for in internal contradictions and a special brand of awkward coquettish charm.  It is the home of Uncle Sam and the setting for Kurt Vonnegut‘s novels. Its buildings have been painted by Norman Rockwell and torn down by public officials in search of progress. The local university has one of the highest-paid presidents, but also hosts the Yes Men. My campus office is on the fifth floor of a 19th century chemistry laboratory. The former lab sits atop a steep hill, providing a view that, on clear days, can go for miles.  The view from my office (above) is an eclectic blend of multiple decades of technological achievements and blunders. Highways, public housing, suburban enclaves, and the husks of Victorian factories stand in conversation with one-another like old friends. It is obvious that they need each other.  Some get along better than others, but they would be lost without the others’ continued existence.  New technology may be introduced to us as singular entities; improvements and replacements that make the old obsolete and irrelevant. More often than not however, these technologies find themselves sitting next to veterans of past technological revolutions. I have lived in Troy for almost three years now, and each day is a lesson in the history of technology.  more...

This is part of a series of posts highlighting the Theorizing the Web conference, April 14th, 2012 at the University of Maryland (inside the D.C. beltway). See the conference website for information as well as event registration.

Last year, at the inaugural Theorizing the Web Conference many of the presentations and indeed conversations outside of the formal panels centered on attempting to understand the role of social media in political movements. Understandably many of these discussions were heavily informed by the events surrounding, for lack of a better term, “the Arab Spring.”

A year later criticism about the role of social media in political protests has matured, for the most part the conversation has moved beyond the reductive and simplistic, “Twitter and Facebook caused the revolution vs. Social Media was the least interesting thing” polarity, instead crystalizing on a more nuanced approach. While scholars have more or less come to terms with the notion that social media can play a role in social protest, contributing to a media ecology which empowers revolutionaries in a way not possible during prior struggles, the ensuing struggle has raised questions about the role social media can play in establishing a new power structure (not just in overthrowing an existing one). In short social media might be good for revolutions, but is it good for democracies?

Indeed a year out critics are now pointing out that the social media enabled protests in Egypt have yet to yield a stable democracy. And in another example critics are also quick to claim that while social media helped to drive the Occupy Protests, the digital network has not been as useful in helping the Occupy Movement produce any substantial policy change.

This session seeks to address these questions, examining the effects of social media on re-building power after a revolution, asking not only what effect has it had, but how might social media technologies be engineered to help with the moments after the revolt.

Panelists after the jump: more...

Getting Wifi in a Park: A Tale of Materiality

Commentary about the Internet and the various communication services it provides, regularly fall into utopian or distopian visions of radically new worlds. The utopias tell of a future in which we are all continually connected in a seamless egalitarian web of techno-democracy. The distopian warnings describe overstimulated zombies shuffling from computer screen to smartphone, hermetically sealed in the echo chamber of their choosing. These predictions are equally unlikely to occur any time in the near future, and for one simple reason- Its really hard (and expensive) to get a stable internet connection in a park. more...

The Human Microphone was created by Occupy Wall Street as a way to get around New York City’s ban on amplified sound in Zuccotti Park. In other words, it is a tool–and a form of non-digital technology–designed to facilitate communication and discussion in large crowds. But like any form of technology, its use isn’t confined to what it was originally created to do.

This is Karl Rove being “mic-checked” while delivering a speech at Johns Hopkins on November 14th. It starts about 1:48 in (be aware, there’s a huge jump in volume at that point). 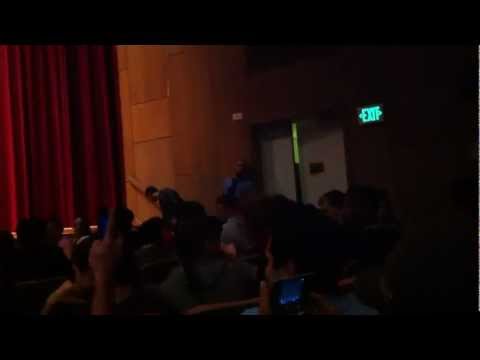 The #OWS Raid at the Intersection of the Physical & Symbolic 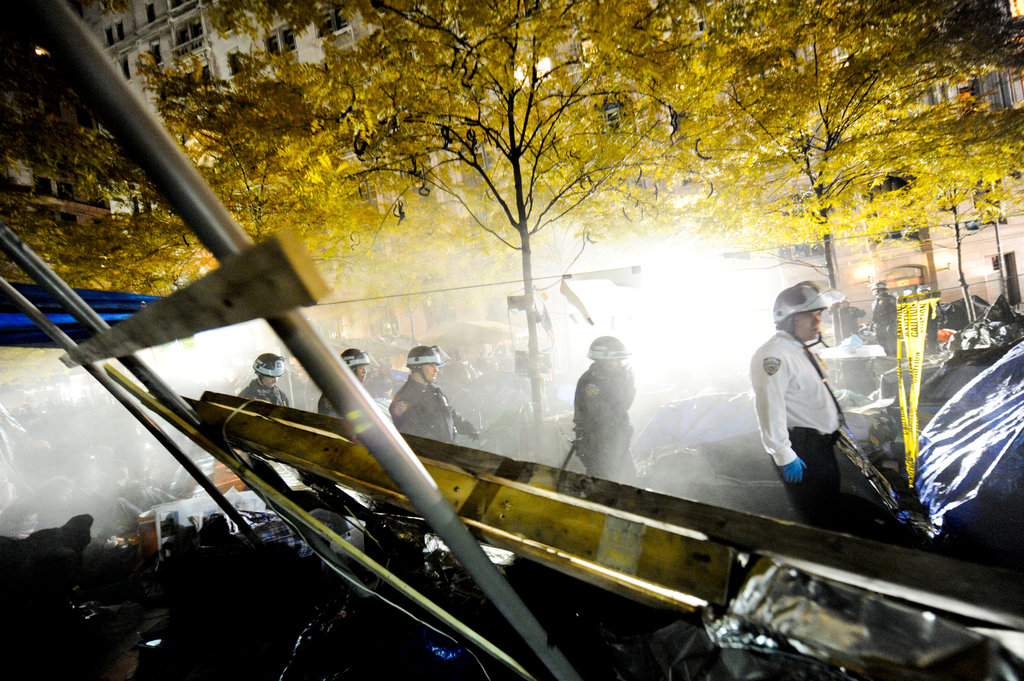 In the 36 hours since the Occupy Wall Street raid removed protest infrastructure from Zuccotti Park, much of the conflict strikes me as the tension between the informational (the symbolic; media; ideas) and the material (physical; geographic). It runs through how New York City carried its actions out (at night, blocking journalists), the ensuing legal fight (does occupying physical space count as speech?) as well as the new strategic challenges facing an Occupy movement where camping is decreasingly an option.

Anyone who reads this blog knows that much of my work lies at the intersection of (1) information, media, technology, the online and (2) materiality, bodies and offline physical space. At this intersection, our reality is an “augmented” one. Part of the success of Occupy (and other recent protest movements) has been the awareness of just this point: by uniting media and information with the importance of flesh-and-blood bodies existing in physical space, our global atmosphere of dissent is increasingly one of an augmented revolution. Indeed, these are not protests centered online, as Jeff Jarvis tweeted this morning, or Zuccotti park, but in the augmented reality where the two intersect.

And this intersection of the power of the image and the power of the material dramatically came to a head about 36 hours ago as I write. In the early morning of November 15th, the two-month long occupation of Zuccotti Park was eliminated by the City of New York. more...

The role of new, social media in the Occupy protests near Wall Street, around the country and even around the globe is something I’ve written about before. I spent some time at Occupy Wall Street last week and talked to many folks there about technology. The story that emerged is much more complicated than expected. OWS has a more complicated, perhaps even “ironic” relationship with technology than I previous thought and that is often portrayed in the news and in everyday discussions.

It is easy to think of the Occupy protests as a bunch of young people who all blindly utilize Facebook, Twitter, SMS, digital photography and so on. And this is partially true. However, (1) not everyone at Occupy Wall Street is young; and (2), the role of technology is certainly not centered on the new, the high-tech or social media. At OWS, there is a focus on retro and analogue technologies; moving past a cultural fixation on the high-tech, OWS has opened a space for the low-tech.

What I want to think about there is the general Occupy Wall Street culture that has mixed-feelings about new technologies, even electricity itself. I will give examples of the embracing of retro-technology at OWS and consider three overlapping explanations for why this might be the case. I will also make use of some photographs I took while there. more...

Social Media and Our Atmosphere of Augmented Dissent

Mass collective action is in the air, on the ground, on the web; indeed, there exists today an atmosphere conducive for revolutions, flash mobs, protests, uprisings, riots, and any other way humans coalesce physically and digitally to change the normal operation of society. [Photos of protests around the globe from just the past 30 days].

Some gatherings have clear goals (e.g., ousting Mubarak), however. there is also the sense that massive gatherings are increasingly inevitable today even when a reason for them is not explicit (e.g., the ongoing debate over the reasons for the UK Riots or the current #occupy protests). For some this is terrifying and for others it is exhilarating. And still others might think I am greatly overstating the amount of protest actually happening. True, we do not yet know if this second decade of the 21st Century will come to be known for massive uprisings. But if it is, I think it will have much to do with social media effectively allowing for the merging of atoms and bits, of the on and offline; linking the potential of occupying physical space with the ability of social media to provide the average person with information and an audience.

For example, the current #occupy protests across the United States more...

Global Voices and the Rise of Curatorial Media

And in the middle are projects like Global Voices, what might be called curatorial media: where content is produced by the many in a social way from the bottom-up and is then mediated, filtered or curated by some old-media-like gatekeeper.

The current protests in Syria can serve as an important example of how curatorial media works. Especially because foreign journalists have been banned from the country, creating a dearth of information for old media. Alternatively, more...