Global Voices and the Rise of Curatorial Media

And in the middle are projects like Global Voices, what might be called curatorial media: where content is produced by the many in a social way from the bottom-up and is then mediated, filtered or curated by some old-media-like gatekeeper.

The current protests in Syria can serve as an important example of how curatorial media works. Especially because foreign journalists have been banned from the country, creating a dearth of information for old media. Alternatively, social media is producing loads of information in the form of status updates, photos, blogs, tweets and so on.

Of course, there are many other social media searches we could do to find on-the-ground information about the Syrian protests, and many other sites besides Twitter to search from. And this is precisely the problem. The New York Times is having difficulty getting direct information from the ground, and the sheer amount of information coming from so many different social media sites is overwhelming. Goldilocks meets McLuhan: one media is too hot, the other too cold.

Hence the need for something in the middle. Curatorial media acts as an old-media-style knowledge gatekeeper while still greatly democratizing just whose voice produces news. Curatorial media does this by sifting through tweets, blogs, photos, etc, whittling down the chaos of millions of people using social media tools into a manageable stream of information.

Global Voices has devoted much coverage to the uprisings across the Arab world and North Africa this year, and these uprisings were influenced by the production of social media content to such a great degree that I suggested we call them an “augmented revolution.” Global Voices utilizes a few hundred editors around the globe to find important material to create a collage of knowledge more democratic than what old-media produces. 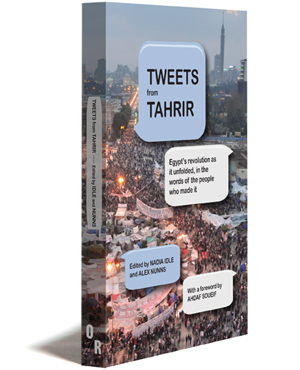 Beyond Global Voices, NPR’s Andy Carvin has been expertly curating tweets from the uprisings, and there is even a (silly) physical book called Tweets from Tahrir that curates selected tweets from the Egyptian uprising.

Thus, we have three models of media all covering the same event in vastly different ways: old media relying on gatekeepers, new media on the crowd, and curatorial media utilizing both. Though, we should note that while curatorial media is good at looking at general trends given a large crowd of content creators, it is highly susceptible to individual frauds, like the Amina hoax.

Of course, social media content curation goes beyond news events. The service Storify lets users curate different social media content to tell whatever type of story they wish. Quakebook allows users to pull together different on-the-ground stories from the recent Earthquake in Japan. This article describes some participatory and curated film projects. And Iceland’s crowdsourcing of their new constitution is not pure wiki-style legislation, but instead a highly curated selection of ideas pulled from the citizenry.

There is a case to be made that the real action in social media is through its curation. What other examples of curated media can we think of? And, importantly, can we think of examples that pre-date the Internet?

[...] won the 2010 Emmy for Interactive Media, is also an example of what Nathan Jurgenson has called “curatorial media”, where old media forms (eg: print newspapers) are augmented by new crowdsourcing capabilities of [...]

[...] and wear vintage clothes), and exemplified in Web 2.0 and the rise of social media (especially curatorial media like LastFM and more recently, Pintrest), where we are all now encouraged to share, like, and make [...]

[...] When a news story breaks, we can look to traditional, top-down outlets like The New York Times as well as finding information produced from the bottom-up by, say, searching a hashtag on Twitter. And we also have the new model positioned squarely in the middle, that space between “new” and “old” media that I have previously called “curatorial media.” [...]

[...] When a news story breaks, we can look to traditional, top-down outlets like The New York Times as well as finding information produced from the bottom-up by, say, searching a hashtag on Twitter. And we also have the new model positioned squarely in the middle, that space between “new” and “old” media that I have previously called “curatorial media.” [...]