We Need to Tell Better Stories About Our Surveilled Future 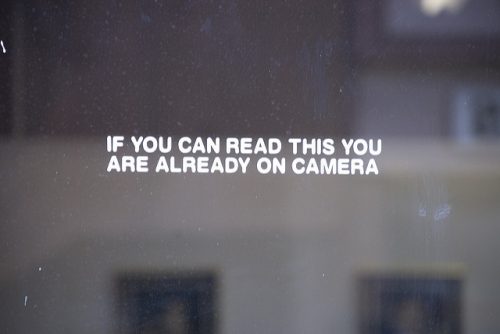 “We need to tell more diverse and realistic stories about AI,” Sara Watson writes, “if we want to understand how these technologies fit into our society today, and in the future.”

Watson’s point that popular narratives inform our understandings of and responses to AI feels timely and timeless. As the same handful of AI narratives circulate, repeating themselves like a befuddled Siri, their utopian and dystopian plots prejudice seemingly every discussion about AI. And like the Terminator itself, these paranoid, fatalistic stories now feel inevitable and unstoppable. As Watson warns, “If we continue to rely on these sci-fi extremes, we miss the realities of the current state of AI, and distract our attention from real and present concerns.”

Watson’s criticism is focused on AI narratives, but the argument lends itself to society’s narratives about other contemporary worries, from global warming to selfies and surveillance. On surveillance, Zeynep Tufekçi made a similar point in 2014 about our continued reliance on outdated Orwellian analogies (hi 1984) and panoptic metaphors.

Resistance and surveillance: The design of today’s digital tools makes the two inseparable. And how to think about this is a real challenge. It’s said that generals always fight the last war. If so, we’re like those generals. Our understanding of the dangers of surveillance is filtered by our thinking about previous threats to our freedoms. But today’s war is different. We’re in a new kind of environment, one that requires a new kind of understanding. […]

To make sense of the surveillance states that we live in, we need to do better than allegories [1984] and thought experiments [the Panopticon], especially those that derive from a very different system of control. We need to consider how the power of surveillance is being imagined and used, right now, by governments and corporations.

We need to update our nightmares.

I want to return to Tufekçi’s argument as it relates specifically to surveillance a little later, but just considering the top Google definition of “surveillance” affirms Tufekçi’s point that our ideas of what surveillance looks and acts like (e.g. cameras mounted on buildings, human guards watching from towers, phone mouthpieces surreptitiously bugged, etc.) have not changed much since both the fictional and real 1984.

Stepping back from surveillance in particular and to look at narratives more generally, two recent books – Discognition by Steven Shaviro and Four Futures: Life After Capitalism by Peter Frase – speak to speculative fiction’s utility for imagining the present and its relation to possible futures. Shaviro puts it simply when he describes science fiction as storytelling that “guesses at a future without any calculation of probabilities, and therefore with no guarantees of getting it right.” Throughout Discognition, Shaviro uses a variety of speculative fiction stories as lenses to think about sentience, human and otherwise; incidentally a few of these exemplify the kind of complex AI narratives Watson calls for.

In the foreword to Four Futures, Peter Frase echoes Shaviro when stating his preference for speculative fiction “to those works of ‘futurism’ that attempt to directly predict the future, obscuring its inherent uncertainty and contingency […]” Frase’s approach, “a type of ‘social science fiction,’” shares with Shaviro’s an appreciation of narrative’s speculative capacities, or speculative fiction’s suitability to narrative.

Both of these works, it should be noted, owe credit to the work of scholars like Donna Haraway. As Haraway surmised in one of the most precient lines of A Cyborg Manifesto (published in 1984 no less), “The boundary between science fiction and social reality is an optical illusion.” Considering the many possible narratives and approaches speculative fiction affords, the disenchantment Watson and Tufeçki express with their fields’ respective narratives feels even more appropriate. Indeed, It is a little dispiriting to imagine the promise and possibility evoked in Haraway’s manifesto could – through narrative repetition – come to feel banal.

Naming culprits for surveillance fiction fatigue would be too easy, though shoutout to Black Mirror for epitomizing this general malaise. A more prominent and useful target of critique would be the various, often well intentioned, surveillance-conscious media we consume. A short list of recent radio/podcast programs that cover the topic include:

This list also serves as a nice cross section of possible formats for popular media coverage of surveillance – a practical how-to guide with expert/industry interviews (Note to Self); a one-off, directed interview segment (SciFri); an open-ended panel discussion among journalists (Motherboard); and a mixture of social commentary, interviews and creative nonfiction (ToE).

Given the variety of formats, you might expect the discourse to be similarly varied. But the narratives that drive the conversations, with the exception of Theory of Everything, tend to revolve around one or two themes: the urgent need to safeguard our personal privacy and/or the risky/undesired aspects of visibility. Important and rational as these concerns are, how many more friendly reminders to install Signal or Privacy Badger do we need?

Meanwhile missing from these discussions are the more apt metaphors and narratives for understanding mass surveillance, how it works and affects everyday life, and for whom, beyond the libertarian sense of the ‘private’ individual. For the energy and attention devoted to surveillance in media and fiction, there are precious few instances where surveillance is treated as a social issue with groups, power structures, and power dynamics that are more nuanced than “the big and powerful are watching.” In the midst of appropriate security culture, what are the surveillance narratives and speculative fictions that are being ignored?

…when President Obama argued that ‘nobody is listening to your telephone calls,’ he was correct. But only insofar as nobody (human or AI) is ‘listening’ in the panoptic sense. […] Instead of listening to identifiable subjects, the NSA identifies and tracks emergent properties that are statistically similar to already-identified patterns of ‘suspicious’ behavior.

Jenny Davis’s contention that “we don’t have data, we are data” similarly helps broaden the discussion of our data beyond individualist notions of personal privacy and private property:

We leave pieces of our data—pieces of our selves—scattered about. We trade, sell, and give data away. Data is the currency for participation in digitally mediated networks; data is required for involvement in the labor force; data is given, used, shared, and aggregated by those who care for and heal our bodies. We live in a mediated world, and cannot move through it without dropping our data as we go. We don’t have data, we are data.

For work in a similar vein, see also Davis’s post on the affordances and tensions involved in Facebook’s suicide prevention service; Matthew Noah Smith’s essay on last year’s FBI-Apple case as “compromising the boundaries of the self”; and PJ Patella-Rey’s presentation on ‘digital prostheses.’

…we have begun to see that the model of surveillance is no longer an iron cage but a velvet one–it is now sought as much as it is imposed. Social media users, for example, are drawn to sites because they offer a certain kind of social gratification that comes from being heard or known. Such voluntary and extensive visibility is the basis for a seismic shift in the way social control operates–from punitive measures to predictive ones.

These examples provide helpful starting points for critical inquiry and hopefully better discourse, but stories and art arguably hold more sway over collective imagination. Just less Black Mirror, Minority Report, and 1984, and more The Handmaid’s Tale, Ghost in the Shell, and Southland Tales.[1] In surreal times, we need more stories that ground us alongside ones that re-enchant the blurring boundary between science fiction and social reality.

“The individualistic perspective endemic to NPR,” as David Banks writes, “pervades all progressive thinking, and the question of which disciplines contribute to our common sense–behavioral economists instead of sociologists, psychologists instead of historians–has direct political implications.” In this way, surveillance-conscious media and its dominant narratives serve as a perfect case study of this tendency. “Technology,” Latour said, “is society made durable.” We might say something similar about media, that narrative is culture made durable. Between privacy and control, our rigid devotion to outdated surveillance narratives leaves too little to imagination.

Image Credit
[1] Also where are the videogames about exploring surveillance in its various forms? Facebook and dominant social platforms gamify our social activity, obscuring the surveillance thereof. Games that made our own surveillance and data collection explicit again, letting us play with the dynamics of visibility, could make them more tangible, real, even fun.