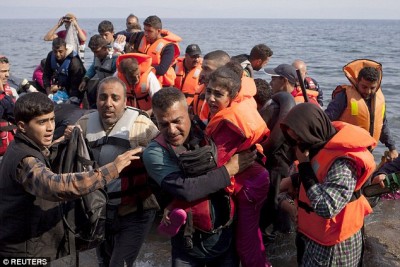 One of my favorite uses of the internet and social media is spreading stories. Not just fiction stories, though those are great, but real stories about real people living interesting and complex lives. They can humanize the dehumanized, spread a bit of positivity in a time when things often seem hopeless, and bring attention to important social issues. Time and again we’ve been appalled at stories of police violence against black Americans, and personal stories can humanize the victims and draw increasing public attention to the systematic violence perpetrated against vulnerable and oppressed populations across the board. The popular “Humans of New York” project brings us stories about people from retirees visiting Rockefeller Plaza, to homeless veterans, to immigrants in a strange city dealing with countless hardships. HNY has recently started including stories from Syrian refugees as well. These stories make the lives of strangers intelligible to us. They help to close the gap between us. And they, at least some of the time for some of the people, help us to empathize.

In the wake of the November 13th Paris bombings, the political conversation in both Europe and the US has turned more forcefully to questions of immigrants, refugees, and borders. This rhetoric is magnified in the US thanks to election season, and candidates are racing each other to see who is the toughest on terrorism (read: who hates Muslim people the most). The House of Representatives has passed legislation that would make it even more outrageously difficult for Syrian refugees to enter the US. Noted turdface Donald Trump is making up ridiculous bullshit to stir up as much anti-Muslim racism as possible. Hate crimes are dropping for every category except Muslims. The Paris attacks are being used to support policy agendas like barring refugees and banning encryption, despite the fact that neither played a role in the attack. Racist memes are being shared by uncles everywhere. Dark times.

A lot of criticism surfaced in the wake of massive news coverage of the Paris bombing, particularly writers noting the stark difference between coverage of attacks in the western world and those in the Middle East and North Africa. David Graham attributes the discrepancy to “the empathy gap” resulting from the lack of familiarity Europeans and Americans have with non-Western peoples relative to their connection with a place like Paris. Maybe we’ve visited France, or have seen it in movies, or consider it a place of high culture in ways that we (incorrectly) don’t associate with places like Lebanon or Mali. As Zeynep Tufecki asks in her recent essay on the politics of technology and empathy:

“These questions go to the heart of the many divides in the world, between rich and poor; haves and have nots; those who count and those who do not. Who is included in the hierarchy of empathy? Who is not?”

Either way, the bottom line is that we don’t care as much. It raises a chicken-and-egg question—do we care less due to insufficient media coverage, or does the media cover it less because we don’t care?

Edward Herman and Noam Chomsky theorized this phenomenon in Manufacturing Consent (1988), arguing that news coverage of wars and natural disasters varies depending on alliances among nation states—US allies are painted as “good guys,” non-allies or combatants as “bad guys,” and third world nations as “naturally violent,” regardless of the details of the events. You’ve probably heard similar arguments—the Middle East has always been violent, “those people” in “that area” have fought each other for centuries. This despite the fact that much of the current instability in the Middle East is a result of western intervention dating back to the fall of the Ottoman Empire and the subsequent carving up of the region into arbitrary nation states, not to mention decades of US intervention in state governments.

So, stories. We need them. If Westerners don’t care about the stability of the Middle East or the refugee crisis, we need to close the empathy gap and make the peoples of other regions of the world more familiar, more relatable. John Knefel and Adi Cohen have documented how Instagram photos “offer a personal window into the refugee crisis that is often difficult to comprehend in its enormity.” In their November 20th episode of Radio Dispatch, John and Molly Knefel note how refugees face problems we may not even think of, like the need for baby carriers as families trek across an entire continent. These problems are compounded by the fact that refugees must travel through regions where they don’t speak the language and are often greeted with hostility.

What if we all replied to Uncle Jerry’s racist meme with the story of Muhammed, who was forced to leave his family behind, finally getting a job in a hotel where he worked 12 hours a day for $400 a month? Or Fatima, whose daughter Sozdar died on the journey after being denied hospital treatment in Turkey? Or Mouaz and Shadi who perished trying to swim the English Channel to escape from the refugee slums of Calais?

Much of what we see about the Syrian refugee crisis are cold, indescript reports that don’t do much to humanize victims of war. And who knows if your uncle will change his mind in the face of these more personal stories—such calls for empathy are often met with the response that sure, it’s sad, but we have to protect Americans first. And you might counter with the fact that our chances of dying in a terrorist attack are astronomically small and that we’ll spend ourselves into oblivion trying to reduce those odds by the smallest fraction. You’re more likely to die being struck by lightning than in a terrorist attack, and more likely to be murdered by a white supremacist than a jihadist (tw: autoplay). But, as someone who has seen racists come around—at least a little bit—after successful conversations on social media, I think it’s worth a shot.

There a million and a half reasons to flex our empathy muscle when it comes to the refugee crisis. Refugees are fleeing the very forces we’re fighting against. Closing our borders bolsters the Daesh claim that the West doesn’t care about Muslims, that we are openly hostile to them, and that they are fighting a holy war. Our lack of empathy allows politicians to get away with perpetuating Nazi-like rhetoric. We risk creating a whole new generation of people who hate the West. In the face of these hurdles and their dire consequences, sharing a personal story of a refugee may seem grossly insufficient. But keep in mind, it wasn’t until the extent of mass murder during the Holocaust was widely known that the US changed its policy on Jewish refugees. If the news won’t cover these stories—if they continue to be utterly incapable of putting a human face on such a massive human crisis—the least we can do is try.