Sometimes it feels that to be a good surveillance theorist you are also required to be a good storyteller. Understanding surveillance seems to uniquely rely on metaphor and fiction, like we need to first see another possible world to best grasp how watching is happening here. Perhaps the appeal to metaphor is evidence of how quickly watching and being watched is changing – as a feature of modernity itself in general and our current technological moment in particular. The history of surveillance is one of radical change, and, as ever, it is fluctuating and rearranging itself with the new, digital, technologies of information production and consumption. Here, I’d like to offer a brief comment not so much on these new forms of self, interpersonal, cultural, corporate, and governmental surveillance as much as on the metaphors we use to understand them.

This is partially inspired by a recent piece by the always-wise Zeynep Tufekci who asks us to update our metaphors, to “rethink our nightmares about surveillance.” Indeed, surveillance metaphors aren’t hard to come by. Usually, there’s an appeal to fiction, like Orwell’s “1984”, Huxley’s “Brave New World”, and Kafka’s “The Trial”. Not far from fiction, Michel Foucault famously appealed to Jeremy Bentham’s proposed Panopticon prison, and this is the metaphor that tends to dominate popular discourse around surveillance. I won’t fully summarize the thesis here other than to remind you that panoptic surveillance, as metaphor, is a style of watching where you are potentially on display to some authority, causing you to modify behavior towards what that authority thinks is ideal. The Panopticon has come to be seen as passé within surveillance studies, and popular discourse has the complicated habit of overextending the metaphor, too flatly rejecting it, and/or just getting it wrong.

To be sure, the panoptic metaphor fails to describe contemporary surveillance in many ways. First, it doesn’t account for surveillance unknown by those surveilled. Remember that it is the presence of the watch tower, which might house guards that can exert punishment, that causes the many to self-censor towards normalization. If you don’t think that being watched is a real possibility, then whatever surveillance is happening is still surveillance, but it’s just not of the panoptic sort (instead, it might be said to be “nonoptic” [pdf]). The panoptic metaphor also fails to account for when the center of surveillance isn’t from the top-down, but lateral or bottom-up (coveillance and sousveillance [pdf]). Others might point to how the Panopticon wrongly understands everyday people as prisoners with too restricted freedom when it is precisely such freedom that is often leveraged for social control, as Tufekci points out in her piece and is central to, say, the Frankfurt School and other critics of the consumer society – especially Bauman’s critique that also takes the prisoner’s gaze to be more important than the panoptic metaphor allows, himself positing the “Synopticon” that describes social control of the many watching the few cultural gatekeepers; the act of looking can modify behavior as deeply as being seen. As such, many have concluded that we should forget the Panopticon as a useful metaphor for understand surveillance in a digital age.

I think such a conclusion does a conceptual disservice. Instead, to best understand the usefulness of the panoptic metaphor, and thus contemporary surveillance in general, it might be better to ask, Panopticon for whom? In short, discussions centered on if the Panopticon is right or wrong obscure its uneven distribution, how such surveillance comes to be unequally directed at some more than others. If you’re tired of all these “opticons” and “veillances”, sorry, but there’s even another term in frequent use within surveillance studies, is extremely useful, is almost entirely missing in popular discourse, and is centered exactly on this question of the Panopticon for whom.

Introduced by theorist Didier Bigo*, the Ban-opticon describes the process of sorting that precedes the surveillance apparatus, panoptic or not. It is a quite useful framework for understanding not just the process of watching, but how people are sorted into being watched or not. The Ban-opticon operates at many levels, for example, through discourse, like “threat levels” or “axis of evil” that create and sort people in and out of different surveillance apparatuses. At the level of architecture, for example, you may notice how some people chose or are forced into different types of airport security depending on their income, name, ethnicity, country of origin, political history, and this architectural sorting comes to be more or less panoptic depending on who you are. Of course, at the legal level, people are routinely sorted into different surveillant treatments, a too simplistic way of describing a more complex surveillance situation [pdf].

Equally important to the actual process of watching is this preceding process: Given that I can see, whom should I look at? Under what rules, codes, and justifications do I look at one person and not another? By understanding this sorting and profiling —usually into categories like criminal or not, safe or not— the ban-optic perspective highlights how, on the one hand, the Panopticon is certainly not an all-encompassing process but, on the other, the panoptic urge is quite alive and well – precisely because of its uneven application.

While, in an aside, Tufekci mentions these “notable exceptions”, I think the general framing, that “the Panopticon has little do to with what happens in liberal democracies”, needs some correcting. The Panopticon continues to exist and has much to do with liberal democracies, even if it isn’t the model that describes how the average Western consumer is commonly watched. What we know about, say, the NSA and drone programs that is so controversial is precisely this sorting in and out of Foucauldian panoptic surveillance, that surveillance some call passé, but continues to exist exactly as the fear of always being watched by a coercive authority (usually the U.S. government). The Panopticon has much to do with what happens in liberal democracies because it is one tool such democracies use to keep people out, to maintain distinctions of “other”, and all this happens whether or not we’re at the business end of the panoptic gaze.

I think we need less surveillance theorizing that attempts to identify the one overarching metaphor to encompass all watching; instead, we need more work towards understanding the various types of surveillance and surveillant outcomes. Important to that project is taking the process of surveillant sorting as central.

I could end this here, but I’d like to conclude by arguing that the ban-optic perspective is useful beyond just saving the panoptic metaphor. It also helps us think about Big Data surveillance specifically. The process of sorting, panoptic or not, is fundamental to Big Data’s usefulness in the market. For example, sometimes people complain that one of the problems with Big Data is that sorting is done by algorithm rather than by humans. There’s lots of truth in that, but there’s a mostly semantic and technical correction that needs to be made: it’s wrong to call humans and algorithms opposites since all algorithms are human, they are codified rules based on and written by humans with certain politics, histories, and interests. That said, algorithmic sorting, through such codification, adds to a certain bureaucratic rationality that removes some wiggle-room for situations not previously anticipated. Instead of decisions made on a case-by-case basis, algorithmic sorting occurs, which is itself a particularly harsh Ban-opticon. This perspective asks us to look at how Big Data sorting can act to create “others”, to keep certain people distant.

That’s only a type of question this perspective can ask, certainly I haven’t done that analysis here. Instead, this is just a short note asking for not a single surveillance metaphor to understand Big Data, the NSA, and new surveillance technologies, but instead we might look to a ban-optic understanding. It would mean taking into account a larger array of players in the modern surveillance game, more than just top-down authorities such as the government, than typical surveillance and privacy writing allows for. The ban-optic perspective demands a multiplicity of surveillance metaphors, which is so crucial for Big Data that, at once, makes it presence known and hidden, encourages coercion and free expression, for different people at different times. There’s a lot of conceptual work to be done in theorizing Big Data, and I think this ban-optic perspective could be fruitful to include in this work. 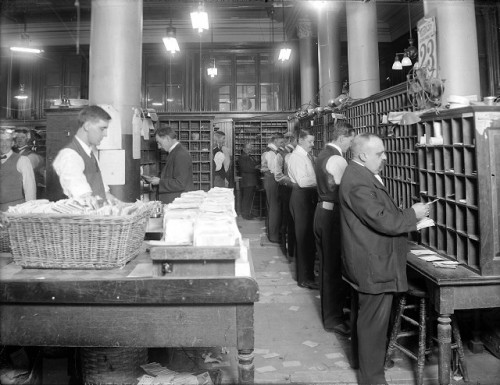 Bigo, Didier (2007). Detention of Foreigners, States of Exception, and the Social Practices of Control of the Banopticton. Borderscapes: Hidden Geographies and Politics at Territory’s Edge. P. K. Rajaram and C. Grundy-Warr, Minneapolis, University of Minnesota, pp. 57-101.

Bigo, Didier (2008). Globalized (In)Security: The field and the Ban-Opticon. Terror, Insecurity and Liberty. Illeberal practices of liberal regimes after 9/11. D. Bigo and A. Tsoukala. Oxon and New York, Routledge, pp. 10-48.

Another way perhaps to come at this is to emphasize findability over sorting. Metadata programs rely on very large and dynamic databases. Any sort of them is instantly obsolete. What is key, at least some of the time, is not a sorted database, but one that can be used to find something or someone. The vast majority of the database is sorted only in the sense of being eliminated from consideration. So instead the proliferation of boxes (categories) in the above picture we have a huge bin for almost everything, and a small box for what is to be found.

The relative importance of sorting into multiple categories and finding specific manifestations is, as you say unevenly distributed. Developing a way to talk about this itself illustrates the sorting/finding distinction.

"So instead the proliferation of boxes (categories) in the above picture we have a huge bin for almost everything, and a small box for what is to be found"

Thanks. A little more on this in my post http://atomicgeography.com/2014/02/24/the-findable-cyborg/