The New 99: Context Collapse and Culture in Motion 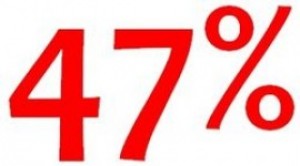 On the anniversary of the Occupy movement, an anonymous saboteur released a secret video from a private Mitt Romney Fundraiser back in May, potentially replacing “99%” with “47%” as the new progressive rallying cry.

I know I ended my post last week with a promise for continuation, but that will have to wait (next week, I promise). Today, I want to talk about privacy, sousveillance, but mostly, context collapse in light of Monday’s events.

In case anyone missed it, here is what happened: An attendant at a small, private, high-dollar Mitt Romney fundraiser secretly taped Romney’s speech and released the tape to the mainstream media. On this tape, Romney makes several politically damning statements, most notably, referring to 47% of American citizens as “victims” who will always depend on the government and about whom it is not his job to worry. Here is a quick snippet of the transcript (see full video below):

He makes several other statements as well, but the content of his gaffe is not the purpose of this post. Instead, I want to talk about what the existence of this tape and the spread of its contents means in terms of social logic. Specifically, I want to talk about how the affordances of social media come to pervade physical space, as the structures of online and offline sociality bleed together.

First, I want to note that we can easily talk about this tape in terms of both privacy and relatedly, sousveillance—or the ground up documentation of high power authorities facilitated through small, cheap, recording devices, user-friendly means of dispersion for user-generated content (UGC), and an increasing connection between UGC and mainstream media. Indeed, a private event became public, and was able to do so through an inconspicuous audience member who recorded the content and spread it through the major (left leaning) news outlets Huffington Post and Mother Jones, which then set the story prominently within national news discourses.

We can also talk about this, however, in terms of context collapse, and to do so, is to talk about a changing logic of sociality.

Context collapse, introduced by danah boyd (@Zephoria) as one key dynamic of networked publics, refers to the literal collapsing of network walls between previously separated familial and social connections as facilitated by the architectures and social structures of social media in general, and social network sites in particular. For example, Facebook networks are likely to consist of schoolmates, work colleagues, grandparents, (ex)lovers, childhood friends, bosses, mothers, fathers, siblings, college buddies, party acquaintances, and everything in between. This presents unique challenges as networked individuals must manage disparate expectations within a shared space.

This  form of sociality—one with collapsed network walls—goes against the deeply embedded identity processes that social psychologist George Herbert Mead discussed back in the 1930s. Mead explains that each group with whom we interact represents a separate Generalized Other, or normative and moral framework within which we form and enact a self. According to Mead, the self is multiple, and each Generalized Other represents a different self, with different (sometimes disparate) expectations for how and who the actor is to be in the world. For instance, our school friends know a very different version of us than do our parents, teachers, bosses, etc. Context collapse troubles the separation of these interactional expectations.

Romney made his remarks in relation to a particular Generalized Other (very wealthy, very right leaning, campaign donors). To treat the tape as though it reveals Romney’s “true” self—a self that he cloaks in relative moderation in public speeches—is a mistake. Rather, it reveals one of Romney’s selves, a self that he expected to contain within the physical and social confines of this particular, small, network of others. Unfortunately for the Romney campaign, a new technologically facilitated logic disrupted this expectation.

The recent Romney tape (and a similar incident with Obama back in 2008) demonstrates that context collapse has moved beyond the digital, and become part of physical space interaction, but that Romney—and many others— are/were not quite prepared for this interactional shift. Closed doors and thick walls no longer necessarily signify separation, but still offer the guise of such. This is not just cultural lag, but culture in motion. The saboteur was successful by exploiting the now empty—though still prevalent—assumptions of pre-digital logic. Ironically, the affordances of networked publics—persistence, scalability, replicability, and searchability, exacerbated the consequences the Romney team naivety.

In tactical response, the Romney campaign announced that it will now allow news cameras into private donor events in which reporters were previously not allowed to film. That is, the campaign, recognizing their outdated logic of contextual separation, decided to make explicit the new reality of networked publics.

[...]   On the anniversary of the Occupy movement, an anonymous saboteur released a secret video from a private Mitt Romney Fundraiser back in May, potentially replacing “99%” with “47%” as the new progressive rallying cry.  [...]

This is very interesting. I'd never heard of context collapse before, but I definitely see it (social media is a big contributor - see Mark Zuckerburg tout the "end of privacy"). I wonder if, in the future, these contextual constraints we have in given situations will be lost, and people are freer to be themselves at all times (a POTUS who skateboards and keeps bees, anyone?). But then, maybe it's necessary for our mental health to have alternate personalities in different situations. I assume it's more of a social construct. Either way, I'd like a world where I don't have to put on a different hat in different situations just to be successful at them.