Damnit, I Want to Talk About #OWS (But I Don’t Want it to Come Back) 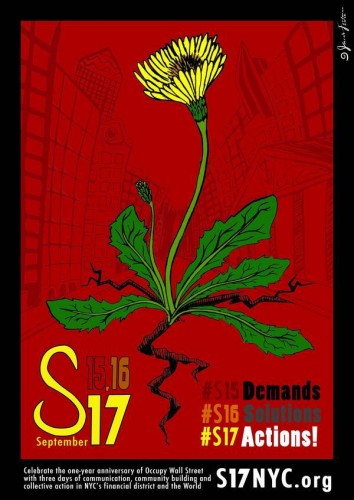 “Those who make revolutions half way only dig their own graves.”

“Power to the imagination.”

I was gonna write something about how I appreciate Procatinator more than everyone else, but I can’t bring myself to do it. Not today anyway. Remember when the United States had this popular uprising and everyone was talking about it and the political establishment was actually afraid of what it could accomplish?  When hundreds of thousands of Americans were exposed to political organizing and direct action for the first time? That started a year ago today, and while the summer did not see massive protests, the Fall promises a new start. A resurgence built upon… arbitrary calendar dates, I suppose. Truthfully, I see no reason why Zuccotti park should be re-occupied, nor should anyone feel the need to act out of a fear of “losing momentum.” Momentum is important for steering large ships, but direct action is all about swimming against the tide. Anarchist movements (and Occupy undeniably fits this category) are by their very definition: voluntary, small, functional, and temporary. We don’t need another occupation of Zuccotti Park. We need something new.

I pulled those four descriptors from Colin Ward’s article “Anarchism as a Theory of Organization” originally published in Anarchy No. 52 in 1966. He expounds on functional and temporary by saying,

They should be functional and temporary precisely because permanence is one of those factors which harden the arteries of an organization, giving it a vested interest in its own survival, in serving the intersets of office-holders rather than its function.

Anarchist organization is temporary at two scales. First, at the micro scale, the role of authority and subordination are quickly traded between individuals within groups. As Bakunin (quoted in Ward) once said, “Each directs and is directed in turn.” At a more macro level, tactics and federated allegiances may shift and change. Strands of the Situationist International, a small avante-garde artist and intellectual movement that ran through the 60s and 70s, can still be seen in the tactics of #OWS and other “anti-globalist” movements. As Cindy Milstein described them: “The Situationists advocated playful disruptions of the everyday, from media to cityscapes, in order to shatter the spectacle via imagination and replace drudgery with pleasure.” The Situationists never called themselves anarchists, but that has little bearing on the use of such tactics today. Anarchism has adopted many of the tactics and arguments of the New Left, minus the vanguardism. Uri Gordon: “…the roots of today’s anarchist networks can be found in the processes of intersection and fusion among radical social movements since the 1960s, whose paths had never been overtly anarchist. These include radical, direct-action end of ecological, anti-nuclear, and anti-war movements, and of movements for women’s black, indigenous, LGBT, and animal liberation.”

For anarchists, the city was always seen as the major site of radical change. Ebenezer Howard, Colin Ward, and Murray Bookchin had begun work on organizing cities well before Marxists had organized around Henri Lefebvre’s “Right to the City.” David Harvey’s most recent book does an excellent job of popularizing and updating Lefebvre’s work and making the case for class struggle in the streets instead of the factory. It has become abundantly clear that the “urban precariat” must be united and organized under and through a popular social movement. It might be called “occupy” but it cannot look like the occupy of 2011.

At the heart of any powerful (and successful) movement is a disruption followed immediately by a diversion. Sometimes it is violent and misguided, which often leads to backfire and a doubling down of the status quo. Violent acts on individuals, and massive property destruction– the kinds of things that get labeled as terrorism– does little more than reinforce right-wing ideologies and gives credence to authoritarian measures of surveillance and policing. Disruptions that not only halt “business as usual” but immediately divert energy and action into a new sociotechnical order have lasting implications. A movement can disrupt major arterial connections of capital for a day or two, but sustained action requires a ready alternative.

Prefigurative politics were one of many guiding principles of the occupy movement. Prefigurative politics require that you live your beliefs, thereby demonstrating the efficacy, practicality, and appeal of the world as you see it. Ghandi and Martin Luther King both organized massive actions that required temporary alternatives to the usual arrangement of goods and services. The Salt Marches, where thousands of Indians collected salt from the sea in defiance of the British salt taxes, brought massive attention to the cause for independence. During the Montgomery bus boycott, activists organized carpools and alternative transportation options for those participating in the boycott. Neither of these examples were meant to show that thousands of people collecting their own salt or driving their friends to work is better than the original arrangement. Rather, just like Zuccottii Park, these actions are a proof of concept; a demonstration that individuals can provide for one-another and that a new arrangement is possible.

Indeed a new arrangement of the sociotechnical order is more than possible. It is necessary. Occupy was able to demonstrate this for a (relatively) brief time in the Fall of 2011. The problem with reoccupying parks and squares is that states and their organizing ideology have inoculated themselves to the effects of occupation. In other words, cities criminalize camping, police barricade parks, and the media fine tunes their narrative of apolitical crusty punks and naive hippies loitering in a public park. The demonstration looses its spectacular qualities as soon as it becomes expected. If radicals want to revive the power and the energy of September 2011, we must devise new tactics. Tactics that correct for past mistakes in organization and bring new people into the fold. Zuccotti did wonderful things, and it was a beautiful place, but it can no longer exist because, by its very definition, was temporary and ephemeral. Occupy cannot be focused on its own survival, or it will surely perish. The key to a healthy movement is to let the tactics follow values. Creativity, spontaneity, and adaptation are the keenest tools of organized people who know that a vastly better world is possible. Nothing would be more tragic than to see spontaneity replaced by the hardened arteries of permanent, professional organization.

"Zuccotti did wonderful things, and it was a beautiful place, but it can no longer exist because, by its very definition, was temporary and ephemeral."

perhaps this speaks to the strong split within the movement, especially at the parks, between those who saw the occupations as a temporary attention-getting tactic and the others who saw the parks as a model for a new society, naively considered something more permanent to be further and further expanded. this division was one of temporality...between permanence and ephemerality.

[...] “Those who make revolutions half way only dig their own graves.” “Power to the imagination.” “I don’t like to write on walls.” -Graffiti in May of 1968 Paris, France.  I was gonna write something about how I appreciate Procatinator more than...  [...]

[...] the anniversary of the Occupy movement, an anonymous saboteur released a secret video from a private Mitt Romney Fundraiser back in May, [...]

Ah, after having this tab open for two weeks, finally got around to reading it.

Another factor to consider here in order to understand the fierce, but strategically pointless, attachment many activists had to the parks is that for many, an Occupy camp was their first taste of revolution, the first time they realized what a group could do together. It was like their first puppy-love crush on the idea that they really, really *could* change the world.

And when they got dumped, it was hard to let go of the thought of that energy and potential, that love they'd thought would live forever, being rebuilt again anywhere else. I think this was very true in Occupy Oakland, where I spent a bunch of time.

Maybe I'm being overly poetic, but I remember my early activist days well. I remember being reluctant to give up something that had been so vibrant and effective but had become a strategic dead end. I've experienced that many times but, like with love, you eventually learn to not be attached when it is time to move on. In the passion of it all, cold, calculated strategy seems alien, especially when it involves leaving behind a cherished space that the newfound revolutionary zeal was anchored to.

I think for these new (mostly young) people, it was less an ideological attachment to a model new society expanding from the camps than it was a simple lack of experience and understanding of the constant evolutionary dynamic between innovation and adaptation. This resulted in a failure to understand why, strategically, the parks neither could nor should be permanent, nor was their any great value in trying to hold them.

As to experienced activists who refused to grok this... Well, that's another story.