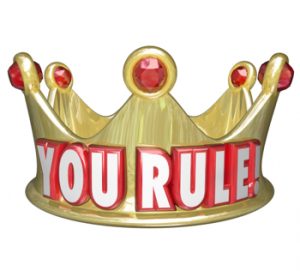 Do you allow the ‘Golden Rule’ to rule your life? Or do you let the pursuit of gold consume your life? The Golden Rule is the popular moral principle of doing things for others that you would like done for yourself. The pursuit of gold is a metaphor for the life of accumulating wealth. Technically, the gold hoarders can follow the Golden Rule, but few do so because the Golden Rule outlaws identity politics, which implies that some racial groups are better than others, and therefore we only need to be concerned about a select group of others.

Instead of focusing on the wellbeing of all people, identity politics takes up the causes of a particular identity group such as a racial or a gender group. While the causes of these identity groups sometimes are valid and just, focusing most political energy on them detracts from the moral and political implications of the Golden Rule.

In the Twenty-first Century, politics has accepted two directions that undermine, if not destroy, the Golden Rule: identity politics and the rule of gold.

Replacing the Rule of Gold with the Golden Rule

Even though amassing great wealth would seem to be the secret to happiness, economic research has discovered that after one has accumulated enough wealth to live at an average comfort level for their society, more wealth does not produce greater happiness.

Why then do so many wealthy people keep trying to increase their wealth far beyond what they need? Some are trapped by greed and simply want the status and fame that come from owning a big pile of gold or its equivalent. Some are trapped by fear and worry because losing their wealth would make them feel powerless. Others are driven by obsession with the symbols of power: cars, airplanes, expansive vacations, servants, and on and on, because they think their lives would feel meaningless without them.

Those trapped by the chase for gold ironically could find peace and freedom from obsession by simply following the Golden Rule, which stands for being generous and kind toward others. Broadly speaking, it refers to an attitude of concern for others on par with one’s concern for one’s self. Narrowly speaking, the Golden Rule states “Do unto others what you want them to do to you.” This was taken from the Torah but made famous by Jesus of Nazareth as quoted in the New Testament (Matthew 7:12).

This message, promoted by many religious communities around the world and by groups such as Charter for Compassion, promotes compassionate action toward all others. Theoretically, if everyone followed the Golden Rule, avoidable suffering would disappear. In fact, the meaning of the rule is so subject to flexible interpretation that its potential for widespread betterment of the world is vast.

The Golden Rule in its original form remains ambiguous, but other admonitions in the New Testament clarify its meaning. Take for instance, the Apostle Paul wrote in Galatians 3:28, “There is neither Jew nor Greek, there is neither slave nor free, there is no male and female, for you are all one in Christ Jesus.” What resounding support for basic human rights is explicitly stated by Paul to the early Christian Church in Galatia, a region in central Turkey.

What Is most remarkable about this admonition from the Apostle Paul is that it is a total rejection of identity politics, under the assumption that the highest moral priority is the equality of humans across all identity groups. Losing sight of this primary moral principle has made identity politics problematic. Issues like equal pay for equal work, sexual harassment, ‘Black lives Matter,’ and transgender accommodation, are all legitimate and important causes, but the focus of attention should be the equality of human beings and their human rights.

One of the great ironies of contemporary politics is that among the greatest supporters of identity politics are the fundamentalist religious groups that lobby, and even kill, for total rejection of the rights of people who are gay, transgender, racial minorities, women, and other religious group members.

Identity politics was totally rejected by Paul in the New Testament, yet many fundamentalist Christians totally overlooked that principle in their lynching of Blacks, gays, the transgendered, and abortionists. On the other side of the political spectrum, many liberals focus upon these identity groups, forgetting that the justification for their causes is the general principle of human equality and the need to treat all others equivalent to oneself.

At the heart of the Charter for Compassion, the Golden Rule stands out, deeply inspiring many disparate groups and individuals. This is from the Charter: “The principle of compassion lies at the heart of all religious, ethical and spiritual traditions, calling us always to treat all others as we wish to be treated ourselves…[I]n our divided world, compassion can build common ground.” Truly liberal and ethical human beings seek, not the dominance of one social group, but the equality of all social groups.

Wattles* (1996) sums up the challenge: a strict interpretation of the Golden Rule would lead one to openly accept people of all nations, races, ethnicities, and social classes. However, many people who give lip service to the Golden Rule do not consider it relevant to their obligations toward people who do not look or act like themselves.

How a Nation Quickly Self-Destructs upon Forgetting the Golden Rule

A survey in October 2017 by the Univ. of Maryland and the Washington Post asked 5,000 adults what they “blamed for causing dysfunction in the U.S. political system?” The two most common answers, with about 95% each were “Money in politics,” and “Wealthy political donors.” In other words, the hoarders of gold and misuse of the power derived from wealth can lead to a corrupt, ineffective political system.

The Charter for Compassion

The Charter for Compassion has been working with a number of representatives who are all committed to spreading the core idea of the Golden Rule into the lives of as many people as possible. The first paragraph of the Charter for Compassion states: “Compassion impels us to work tirelessly to alleviate the suffering of our fellow creatures, to dethrone ourselves from the center of our world and put another there, and to honor the inviolable sanctity of every single human being, treating everybody, without exception, with absolute justice, equity and respect.” Stephen Vasconcellos-Sharpe, editor of Salt Magazine, wrote: “The golden rule is the most basic foundational principle. It’s a game changer when applied.” We desperately need simplicity at this time. Not more words that add needless complexity and barriers of prejudice and discrimination between social groups.