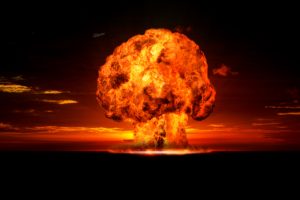 The first half of 2017 has tossed the world order into a new set of vulnerabilities not previously experienced. We have been previously threatened by high risks of nuclear war but not simultaneously with giant storms generated by rapid global warming. All out nuclear war and climate catastrophes produce such devastating damage and death that humanitarian considerations give these threats highest priority for preventative measures. In other words, the suffering from these possible future events is so terrifying that measures to curb their probability in the future are critical for present day decision-making.

In addition to these future sources of catastrophic suffering, there are a number of current sources of suffering such as poverty, hunger, and disease. In the analysis that follows, we take on the challenge of identifying and prioritizing both of these types of catastrophic sources of suffering. This appears to be the first time this prioritization has been attempted. Hopefully, there will be many more such attempts. The importance of tackling this challenge is based upon the fact that the reduction of suffering tends to be viewed as a moral issue, not just a matter of politics or convenience. It also is based upon the fact that most of these sources of suffering are expanding in their reach, both now and in the future.

While war and climate change at the present moment are causing suffering, death, and destruction, their potential impact at some point in the future is likely to far exceed any such tragedy in recent generations. Adding nuclear weapons to worldwide wars and unmitigated global warming adds a new order of magnitude to suffering and creates pathways toward extinction.

In September 2017, the United States and Caribbean nations have been attacked by two of the largest and most powerful hurricanes in its history. Millions of people were temporarily displaced.

A few days before this, India, Nepal, Pakistan and Bangladesh experienced catastrophic hurricanes and flooding, leading to huge displacements and well over 1,400 people killed. The principal causes of these storms and flooding has been the extremely high temperatures of the ocean water and the high level of moisture in the air. Both of these factors result from destruction of the protective atmosphere around the earth. And the principal source of that erosion is the sharp rise in carbon density, producing rising global temperatures and in turn rising glacier melting.

As many scientists forecast the possibility of worldwide death and destruction by the year 2100 from unabated global warming, the primary threats of nuclear war and global warming threaten survival of the human species. Such human destruction would produce a magnitude of world suffering never previously realized.

Projections of future climate change suggest further global warming, sea level rise, and an increase in the frequency and severity of extreme weather events and weather-related disasters. Effects of global warming include loss of biodiversity, stresses to existing food-producing systems, increased spread of known infectious diseases such as malaria, and rapid mutation of microorganisms. It has been suggested that runaway global warming (uncontrolled climate change) might cause Earth to become impossibly hot like Venus. In less extreme scenarios, it could cause the end of civilization as we know it.

The potential for, and high probability of, such extinction of the planet, including most of human life, has been forecast by numerous expert scientists who are summarized in a report by David Wallace-Wells in the New York Magazine on July 14, 2017 entitled The Uninhabitable Earth.

This report predicts that teens of today will live to see most of their fellow human beings dead or dying because of the following forces: 1) deaths due to heat resulting from the carbon and methane gases released by the melted polar ice masses, 2) loss of most agricultural land for growing food due to unprecedented droughts where most food is grown, 3) climate plagues following the release of pandemic-producing bugs, parasites, and plagues frozen now in the polar ice, 4) unbreathable air because of rapid saturation of the atmosphere with carbon dioxide, which will not only make us sick but create significant impairment of cognitive abilities, 5) poisoned oceans from acidification, loss of coral reefs, and death of many marine species, and 6) permanent economic collapse because of loss of most of the workers of the world and the natural resources needed for making items most desired by what is left of the consuming public.

Nuclear weapons have only been used by the United States against Japan toward the end of World War II. Two bombs were dropped killing 120,000 people in the cities of Hiroshima and Nagasaki. Fear of nuclear attacks by the Soviet Union led Americans in the 1950s to build and stock ‘fallout shelters’ in many commercial and residential buildings.

The magnitude of destruction from a nuclear war, of course, depends on the unique set of circumstances including the wind and weather, which can carry radiation around the globe and remain suspended for decades. While preoccupation with nuclear war became a Western fear and obsession, only a tiny fraction of the people alive in 1945, remain alive today. Thus, deep fear of either fallout or death from nuclear war are hard to find.

The loss of memory regarding the extreme destruction and devastation of nuclear attacks means that relatively few people worry about the consequences of nuclear war with North Korea or other nations. A public opinion study by Stanford University political scientist Scott Sagan (2017) found that a majority of Americans readily accept the deaths of millions of civilians in another country. Furthermore, they readily accept a nuclear attack of another country as long as it minimized the loss of lives of American soldiers.

As a result of the North Korean standoff with the United States in September 2017, President Trump and his generals have conceived of a plan to build so called ‘mini-nukes’ or ‘low-yield’ nuclear bombs. The purpose of such weapons would be to terrify our enemies, but the secondary effect would be to increase the likelihood of nuclear war.

This set of threats and generators of suffering are catastrophes for which we have estimates of suffering, specifically annual prevalence’s of deaths and displacements. These sources annually affect about a billion a year from poverty to an estimated 5 million a year from water pollution. These types of sources of suffering can be prioritized by simply estimating the number of persons annually experiencing extreme suffering due to each of the sources listed. Priorities 3 through 8 in Table 1 were produced using these proceedures.

A ‘think tank’ called the International Crisis Group concluded: “From the global refugee crisis to the spread of terrorism, our collective failure to resolve conflict is giving birth to new threats and emergencies. Even in peaceful societies, the politics of fear is leading to dangerous polarization and demagoguery. These problems like refugee migration and terrorism can be called secondary threats because they are less likely to kill or maim massive numbers of people than would nuclear war and unabated global warming. Included among these secondary threats would be illnesses, gender-based violence, economic depression, water and air pollution, unemployment, inequalities, and so forth. Unfortunately, statistics are not available on the number affected by some of these sources of world suffering.

The global threats listed above are not complete or comprehensive, but nonetheless their destruction and suffering are enormous and daunting. The list in Table 1, of primary and secondary world threats, parallels the list of “Global Goals,” which were originally called Sustainable Development Global Goals. Some of these Global Goals are listed in the Table. Note in the table that when the official goal is stated as a positive or desired global feature, the negative form of the secondary threat is given in parentheses. 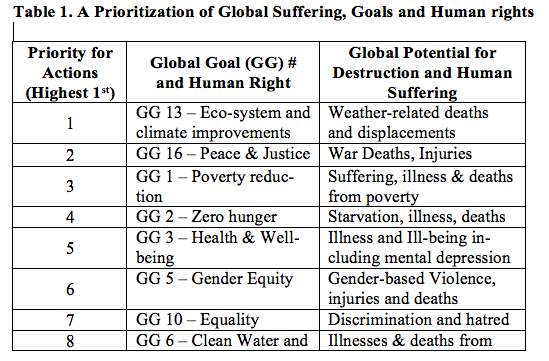 For the priorities 3 through 8, their priority order has been determined by the number of persons suffering extreme harm from each source. Priorities 1 and 2 are more difficult to evaluate because the future is filled with contingencies. Catastrophic global warming has been ranked higher than nuclear war because it probably will be much more difficult to return the earth to its normal functioning than it will be to deter global nuclear war.

Intense human suffering that violates a specific human right provides a more compelling rationale for the human right than does the traditional ‘natural rights’ argument. Human rights are legitimated by their intimate link to suffering within this framework.

Relief of extreme global suffering has moral priority over enhancing the general well-being or happiness of the population. Finally, selected Global Goals define priority purposes and meaning for the planet. Suffering thus establishes the close bond between human rights and global goals.

Karl Popper concluded that “Human suffering makes a direct moral appeal for help,” but does not call for increasing the happiness of those already doing well. From a moral perspective, well-being and suffering are not just ‘two sides of the same coin.’ Human rights are much more concerned with avoiding the terrible than with achieving the best.

Human rights are primarily focused on preventing the worst forms of suffering like cruelty. Other violations cause less suffering, but should not be forgotten. According to Andrew Fagan, “the ethical imperative of human suffering” provides a foundation for the formulation of human rights. This is especially true for the subset of human rights referred to as ‘economic, social and cultural rights.’ But it is also true of those rights designated as ‘civil and political rights’ as well.

Roberto Andorno and Christiana Baffone, in Suffering and Bioethics (Oxford Online 2014), build a case for human rights being the primary intersection between human dignity and human vulnerability. If a vulnerability such as racist discrimination undermines the normative value of human dignity, the victims deserve the protection against suffering that a human rights principle can offer.

This analysis has revealed that world suffering, at least in its most extreme forms, helps us set priorities for both reducing suffering and for building a better world society. To evaluate and choose the most effective suffering-alleviation actions, it is necessary to review the major institutional sectors of global society, Then, one should look for the suffering-alleviation activities by which societies tend to neutralize the rough edges and severe pain of suffering and prevent further avoidable suffering.

While any individual is free to opt out of engaging in suffering-alleviation, our analysis reveals that worldwide many different organizations, programs and individual participants take a great deal of shared responsibility for relieving our own suffering as well that of others.

None of these sources of suffering identified here are trivial. For example, racial hatred and discrimination occurs on a daily basis, hindering progress for millions of people around the world. From denying individuals the basic principles of equality and non-discrimination to fueling ethnic hatred that may lead to genocide, racism and intolerance destroy lives and communities. The consequences for society are grim if people do not consider avoiding racial discrimination as well as the other Global Goals emphasized here.