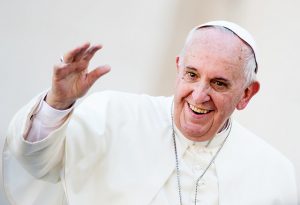 From the time of his election in 2013, Pope Francis stood out as a spiritual leader who put service to the poor and eradication of injustice at the forefront of his mission. A year before his visit to the Mexico-USA border in 2015, he decried the tragic neglect of the 50,000 unaccompanied minors who cross the border to the US each year. He called for an immediate humanitarian response, but his plea was largely in vain.

His plea included humanitarian aid to communities in Mexico and Central America that are trapped by vicious cycles of violence and poverty. And he urged humanitarian relief efforts on the US side of the border. Finally, he urged new forms of legal and secure migration be adopted by the United States.

Given these remarks, Pope Francis would be greatly pained by the harsh and inhumane treatment of many undocumented workers and their families today in the era of the Trump administration.

Catholic groups such as Catholic Charities, are already playing an active role in the effort to provide care and shelter for unaccompanied immigrant children on the border. However, many are reportedly already overwhelmed by the sheer number of children.

On April 25, 2017, Pope Francis made history with the first ever Vatican TED talk. This marks a new era for Vatican communication in its attempt to reach younger people, particularly the young leaders of the high technology industry. Pope Francis could have said anything he wanted, e.g. urging relief for the refugee crisis around the world, one might expect him to address that and to encourage greater commitment to humanitarian aid and innovation.

Instead of pushing for humanitarianism or helping the poor, he emphasized the inter-connectedness of human-kind and the need for greater solidarity. After warning of the dangers of power, his main message was a call for a “revolution of tenderness.” As noted in the New Yorker, he elaborated upon this message by saying that tenderness is not weakness, but a path toward solidarity and humility.

Listening carefully to his words,’ his main concern appears to be powerful individuals that fail to understand that with this power comes social responsibilities. He clearly stated that those with power must be humble and tender toward not only other people but the environment as well. He pleaded with his audience of technocrats not to forget the marginalized. He also called for more equality and social inclusion and said that if “you don’t do these things; your power will ruin you.”

Even though an anonymous source said the Vatican had been working on this speech for a year, one cannot help but guess that Pope Francis feels deeply worried about the militaristic threats between the United States and North Korea. He also, from previous remarks, feels deeply about the rising popularity in the Western World of political parties that take tough stands against accepting refugees.

Not only is there a rise in popularity globally of racist and anti-immigrant attitudes, but support is growing for inhumane policies that produce even greater inequality, hardship and suffering.

Upon further reflection, I believe that Pope Francis is so concerned about the many signs of a darkening world, that he felt it would be more important to point out the creeping darkness of contemporary history and its threat to the survival of humanity. That is consistent with his warning about power and the powerful. Given the potential for evil that comes when the powerful lack humanity, he warns us that tenderness, equality, and solidarity must prevail.

While one could be concerned that Pope Francis had decided to place less priority upon humanitarianism, I believe his new language and themes in the TED talk respond to a declining use of the humanitarianism terminology globally. This shift in the language of humanitarianism may be a widespread capitulation to egoism and narcissism. But it may also reflect greater use of terminology such as ‘service to others,’ compassion, and caring.

Pope Francis during his recent speeches in Cairo said, “The future does have a name and its name is hope.” In his address to Christian, Coptic, and Muslim clerics he called for them to “say a clear and firm no to every form of violence, vengeance and hatred carried out in the name of religion.” If religious leaders and their congregations followed this admonition, terrorism could die out in a generation or two.

Rather than say that we should make our nations great again, his central message to the world was that “We all need each other.”

After the Trump/Putin meeting in Hamburg at the G20 summit on July 7, 2017, President Trump said his first meeting with Mr Putin was “tremendous.” However, Pope Francis described it as dangerous, much like alliances between China and North Korea. He said: “In the minds and hearts of government leaders… and in all political measures, there is a need to give absolute priority to the poor, refugees, the suffering, evacuees and the excluded.” Pope Francis stressed the greatest danger concerns immigration, with “the poor, the weak, the excluded and the marginalised” juxtaposed with “those who… fear the invasion of migrants,” according to the Italian daily la Republica.

Sadly, Pope Francis is one of the few global voices publicly pushing an agenda of action for the well-being of the poor and suffering around the world.