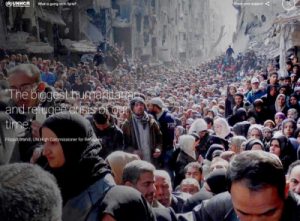 The United Nations High Commission Refugees (UNHCR), in partnership with Google launched a website called Searching for Syria. (www.searchingforsyria.org) Its purpose is to educate people about Syria using website design or social media. The website is a photographic marvel. I urge you to spend a few minutes reviewing what they have done. The life-like photos of such tragic scenes give one a jolt because of their realism.  They also remind us that a number of social and communication critics have pointed out that images of suffering often exploit those trapped in suffering and unfairly stereotype them (Chouliaraki 2013; Sontag 2003). The website aims to answer questions like what Syria was like before the war, why the war broke out, and whether or not there is anything that people can do to help Syrian refugees. It is important for the world to gain an understanding about situations as they are developing, and the reasons behind them. Much more can often be achieved if people are fully educated on events as they are happening. Filippo Grandi, the UN High Commissioner for Refugees stated that “The website, Searching for Syria, aims to dispel myths and misconceptions about Syrian refugees and provides an entirely fresh look at the biggest humanitarian tragedy of today.” The chart below shows the flow of refugees from an origin (left) to a destination (right) country with the size of the horizontal bars representing the size of the refugee migration. Syria is on top, followed by Afghanistan, Somalia, South Sudan, and Sudan. The primary host countries for Syrian refugees are in order Turkey, Pakistan, Lebanon, and Jordan. King Abdullah II of Jordan has said the number of refugees coming into Jordan equates to one fifth of their population. Syria has the largest refugee crisis in the world. More than half of the 22 Million Syrians have been forced from their homes. Most seek refuge within Syria, if they can. They make up the second largest internally displaced population in the world. Around 5 million Syrians have become refugees (see chart), and a half million Syrian people have been killed since 2011. 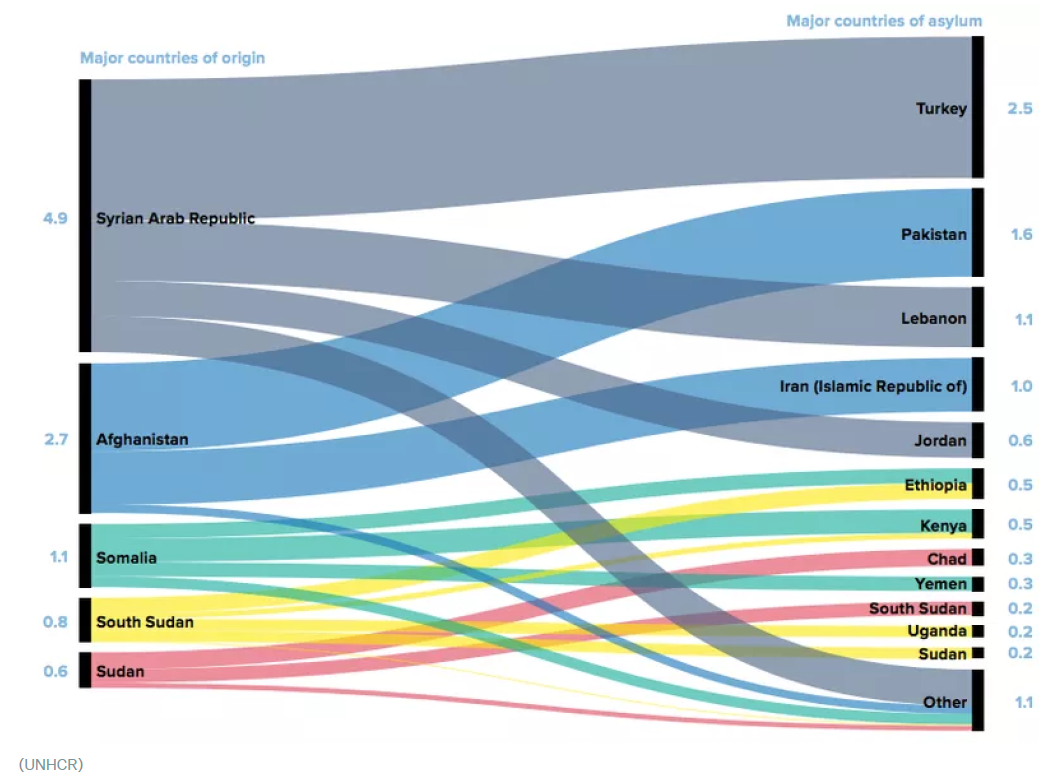 As described in one of my earlier posts, at the beginning of 2017 over 65 million people around the world had been forced to flee their homes to escape danger, and find safety. There are now more people displaced by conflict or persecution than any time since World War II. Women and children make up over two-thirds of all Syrian refugees. Nine in ten Syrian refugees live in cities, not camps. The majority have resettled in urban areas within their host country. But city life poses different challenges; many struggle to find work, pay rent or send their kids to school. One in four schools in Syria have been damaged, destroyed or used for shelter, and 24.5 million years of education have been lost.

Other Human Rights Crises in Syria

Intensification of the Syrian War has led to many dire humanitarian crises, with millions of people living in besieged areas and denied life-saving assistance and humanitarian aid, according to the Syrian Center for Policy Research, an independent Syrian research organization. More than 117,000 have been detained or disappeared since 2011, the vast majority by government forces. Syrian and Russian airstrikes continue to target, or indiscriminately strike civilian areas, including homes, markets, schools, and hospitals, using wide-area explosives, barrel bombs, cluster munitions, and flammable incendiary weapons. In a report issued on August 24, 2016, a UN-appointed investigation attributed two chemical weapon attacks earlier in 2016 to the Syrian government and one to ISIS, which is already under UN sanctions. Human Rights Watch (https://www.hrw.org/world-report/2017/country-chapters/syria) documented several attacks on homes, medical facilities, markets, and schools that appeared to be targeted, including a major airstrike by the Syrian-Russian coalition that hit the al-Quds Hospital killing 58 civilians and patients. In August 2016 alone, there were several attacks on health facilities including in Idlib, Aleppo, Hama, and Homs. Over half of Syria’s hospitals are no longer functioning. The siege of civilian areas by government and pro-government forces and by armed opposition groups and blocking of humanitarian aid continues. The Syrian government continued requiring aid agencies to go through a bureaucratic approval system to obtain permits before accessing these areas. The UN secretary-general said that even in areas where aid was allowed in, the Syrian government has removed life-saving items from convoys. According to the UN, in one month, the government prevented 80,000 medical treatment items, including diarrhea kits, emergency health kits, antibiotics, and other medicines, from going into besieged areas. Arbitrary detention, ill-treatment, torture, and forced disappearances by government forces continue to be widespread and systematic in Syria, and take place within a climate of impunity. How can so many people around the world ignore the grave humane crises emerging from the Syrian War? The people of Syria deserve our help.

On July 7, 2017, in a 2-hour meeting between President’s Putin and Trump, a rough deal for a ceasefire in southwestern Syria was worked out. It was set to be put in place two days later, on July 9. While this appears to be major progress toward reducing the killings and ultimately ending the war, it could easily be short-lived and known as the fifth failed ceasefire agreement. From a humanitarian point of view, the biggest concern is the history of disdain for human rights by the main players in this agreement. Putin’s has a long history of promoting world disorder and neglecting freedom and respect for human life. And Trump has not uttered the words “human rights” or “suffering” in his first six months as President of the USA. In addition, President Bashar al-Assad of Syria has a lot to gain from the ceasefire, assuming he can now divert military resources to other parts of the country.Bashar al-Assad’s record has been to not only dismiss humanitarian concerns, but he repeatedly bombed hospitals and convoys carrying humanitarian supplies to civilians in Syria. Peace and peace accords are wonderful, but if they are achieved without commitment to preserving human dignity, respect and freedom, the ceasefire agreements have little hope of long-term peace.

Chouliaraki, L. (2013). The Ironic Spectator: Solidarity in the Age of Post-Humanitarianism, Cambridge: Polity Press.
Sontag, S. (2003). Regarding the pain of others. New York: Picador.