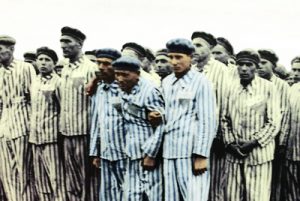 Sufferers worldwide can be understood to ask a comparably soul-stirring question – “How can bystanders be indifferent to our anguish?” Certain sufferers point up a corrective “beautiful answer” with the example of their lives as “beautiful” Upstanders, as men and women dedicated to high-risk care-sharing. When their inspiring model achieves widespread acclaim and emulation the campaign to alleviate suffering will have gained a unique and invaluable aid.

Consider this case study: Across 12 years (1933-’45) of the WW11 Holocaust, as experienced in 24 Nazi-occupied European nations, the noblest of victims rose to the occasion, which is to say, risked all to alleviate the plight of less fortunate others. A small never-to-be-known number of daring and empathic individuals (hereafter called “Carers”), responded with what hereafter will be called “acts of stealth altruism.” Their behavior attests to an innate desire of ours that Charles Darwin called the Social Instinct, a hard-wired need we feel to help others in extremis, even when confronting fierce opposition to such outreach.

Typical was the secret “stealth altruism” counsel of hardened Death Camp prisoners assigned by the SS to meet arriving transports of utterly bewildered former ghetto dwellers. Expected to quickly throw bodies out of the over-crowded cattle cars and collect the luggage of new arrivals on the train platform, the prisoners were under strict orders not to communicate in any way with the discharged train passengers.

Knowing full well they risked summary execution, some of the prisoners defied orders and stealthily passed along life-saving advice. Aware the SS would soon ask the newcomers their age and occupation the prisoners casually moved along the train platform secretly advising young arrivals to answer – “16 years of age or older, and boast of having a manual trade.” Adults were told – “45 years of age or younger, and claim to have a manual trade.” Any contrary answer would result in being assigned to a doomsday line that led only to the Gas Chamber, rather than one which meant living longer as a slave laborer, and possibly even making it to liberation.

Creative variations on such forbidden acts of “Stealth Altruism” were a secret part of the atrocious reality of overnight Nazi occupation of one’s home country, oppressive life in an insular ghetto, tortuous cattle car transport to the six Death Camps, excruciating existence in the 90 Concentration Camps, lingering suffering in over 35,000 Slave Labor Camps, and anguished Death Marches, all realms of Hell worse than anything Dante or Milton had imagined.

Dehumanization was resisted everywhere, and acts of stealth altruism came in every possible variation. Under occupation, for example, certain Jewish doctors and teachers barred by the 1935 Nuremburg Laws from their professional posts would dare to develop forbidden alternatives, e.g., doctors would make high-risk house visits after midnight curfew even as teachers discretely offered secret K-12 and even college classes in clandestine living room “classrooms” – all at risk of life and limb.

In the scores of besieged ghettos certain of the boldest children would sneak through enclosure walls to desperately barter with gentile bystanders for scarce food they would then try to smuggle back to starving family members – rifle-fire execution the price of being observed by SS guards rewarded for such marksmanship.

In cattle car transport that took many days to move ex-ghetto dwellers to the camps certain “take charge” types of victims would “enforce” improvised “rules of conduct” that helped alleviate the toll of unimaginably inhuman travel conditions (no space to sit or lie down, no light, no food, no toilet). Arrangements were made to allow passengers brief stays at a few outlets for fresh air, along with the sharing of precious food, the discharge of human wastes, and comforting by strangers of strangers. Certain victims, intent on preserving their humanity for as along as possible, showed all others how 101 small adjustments could help.

In the camps certain small groups of non-related female prisoners would join together as “camp sisters,” and provide one another with precious, though also prohibited care and comfort. Some women secretly “adopted” children suddenly orphaned when their parents were sent to the gas, an act of stealth altruism that requited the sharing of scarce food and personal energy. Certain males, in turn, would “illegally” tutor new arrivals in secret survival aids, knowing that naiveté was deadly. During Death Marches out of the camps as the war wound down certain exhausted and emaciated prisoners would discretely hold up and encourage weaker others, all the time knowing that failure to keep to pace of the march meant certain casual execution.

To judge very cautiously from a close read of 195 survivor memoirs, and scores of conversations with elderly survivors, all types of acts of stealth altruism were far more common than is now appreciated by the general public. Professor Nechema Tec, a scholar/survivor who interviewed hundreds of fellow survivors over many decades, found many had been involved with “humane acts on behalf of others … Unprecedented oppression led to equally unprecedented forms of resistance.” (Resistance, 2013; pp.6,15). Likewise, Manya Frydman, survivor of six years of struggle at eight Concentration Camps, wrote – “We resisted in every way we could. Our weapons were our bare hands, our minds, our courage, and our faith. I resisted by stealing bread and potatoes to share with my friends. I resisted by risking my life time and again. The Nazis could not crush our spirit, our faith, or our love for life and humanity.” (Six Years Forever Lost; 2012; p. 80).

Rabbi Harold M. Schulweis would have us understand that Holocaust memorialization is “a sacred act that elicits a double mandate – to expose the depth of evil and to raise goodness from the dust of amnesia.” (For Those Who Can’t Believe; 1994; p. 157). Likewise, child survivor Pierre Sauvage contends – “If we remember solely the horror of the Holocaust, we will pass on no perspective from which meaningfully to confront and learn from that horror. If the hard and fast evidence of the possibility of good on Earth is allowed to slip through our fingers and turn to dust, then future generations will have only dust to build on.” (Garber, Z., ed., Methodology in the Academic Teaching of the Holocaust; 1988; p. 118).

In sum, then, we are challenged to re-examine every account we have of large-scale suffering, every genocide and mass murder event in modern time, and bring to light acts of stealth altruism. In this way, we can bolster our confidence in the Social Instinct of us all, and inspire new creative efforts to “raise goodness” and value “hard and fast evidence” of the better angels of our nature. The stealth altruism of Carer victims should be taught alongside the inhuman horror they defied. Humanity needs such inspiration.

(Note: This article builds upon the recent book by Arthur Shostak, Stealth Altruism: Forbidden Care as Jewish Resistance in the Holocaust. See References.)

Author Bio Brief: Arthur B. Shostak (born May 11, 1937), is an American sociologist and futurist, and former professor of sociology at Drexel University. His research areas include future studies, the history and future of the American work force, organized labor, industrial sociology, the management and social implications of modern technology, and most recently the Holocaust. He received his Ph.D. in Industrial Sociology at Princeton and began teaching at Wharton School of Finance and Commerce at the University of Pennsylvania in the 1960s. In 2006, Arthur received the Distinguished Career Award for the Practice of Sociology from the American Sociological Association. He is the author of over 30 books and 150 articles.