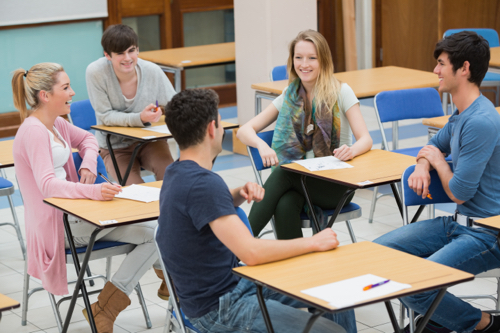 The Pew Research Survey of American adults in June 2017 discovered a disturbing trend: most (58%) of the Republicans gave a negative view of higher education (“colleges and universities.”) In stark contrast, only 19% the Democrats agreed with the negative answer to this survey question: “Do you believe that colleges and university have a negative or positive effect on the way things are going in the country?” Incidentally, the survey included “leaners” (those saying they lean toward Republicans or toward Democrats) in each political group. The survey of 2,504 adults was conducted during the second week in June 2017.

The truly disturbing aspect of this trend is that the sharp rise in negative attitudes toward higher education began in late 2015 at the beginning of the presidential campaign, when only 35% of American Republicans believed higher education played a negative role in society. A year later in the middle of the campaign that percentage had swelled to 46% before climbing to 58% in June 2017. Meanwhile the negative opinions of the Democrats and those leaning Democratic remained not only very low and very flat at about 21%.

Less surprising was a rise in negative attitudes toward the “national news media” during that same period. In 2015, 67% of Republicans viewed the media as negative and that jumped to 85% by 2017. Again, the Democrats view of the news media was pretty flat, though higher than views on higher education, with 51% giving negative views in 2015 and 46% in 2017. 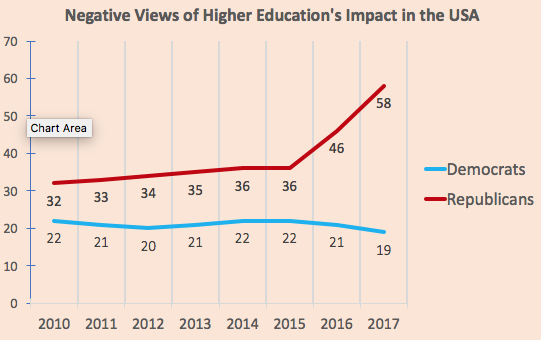 These trends suggest that part of the explanation for Republican’s negativity toward higher education resulted from their negative views of the media, but a lot more was going on. During the past two years, politically conservative groups and media outlets were pushing anti-intellectualism, government hatred, and attacking the culture of higher education.

Examples of this concerted attack on higher education includes the backlash against Hillary Clinton’s proposal to offer free college expenses for the very low income and to revitalize Pell grants, for which Donald Trump proposed heavy cuts.

Meanwhile, Breitbart News attacked higher education for such things as blocking anti-Trump skywriting campaigns during college football games. Also, publishing negative articles about higher education was the politically conservative website, Intellectual Takeout. This website states its mission as promotion of “rational discourse,” but a close examination of its overall content reveals that its discourse is one-sided and often prejudiced toward everything but mainstream political conservatism.

After the campaign, students protested Kellyanne Conway speaking events on college campuses. In response Fox News and other conservative media outlets broadcast a loud protest campaign against higher education and their student cultures for inconsistent standards on free speech.

Perhaps the greatest force against in the past two years has been the rhetoric of Donald Trump combined with his role model symbolizing the uselessness of lacking skills for reading, serious writing, and careful policy analysis. His racist/populist messages conveyed a disdain for intellectual accumulation of scientific knowledge and research-based facts. His underlying message continues to be that fact and fact-finding matter little compared to power and the accumulation of economic wealth.

Other trends in the United States that contributed to this pseudo-ideology are: the current decline in college enrollments across America; a large drop in the number of graduate students due to the inability of many foreign students to obtain student visas; and the growing popularity of creationism and rejection of global warming.

As documented by Richard Hofstadter in his book, Anti-Intellectualism in American Life, America has seen rises and falls in anti-elitism, anti-reason and anti-science in the national culture. These escapes into irresponsibility have been driven by the false premise that democracy makes up for ignorance. Isaac Asimov once said: “There is a cult of ignorance in the United States winding its way through our political and cultural life.”

World Suffering and the Decline of Higher Education

The contemporary popularity of nationalism and populism in Western Europe as well as other parts of the world makes it difficult for the United States to remain insulated from the cult of ignorance.

The primary causes of global suffering include famine, war, meanness, and hatred. In addition, global warming is rapidly becoming the chief source of world suffering, with potential to destroy billions of people. The alleviation of suffering demands wisdom, knowledge and intellectual commitment and imagination.  If we allow higher education to erode, we risk rapid failure of other critical social institutions around the world. Suffering-alleviation challenges in our near future will require problem-solvers loaded with wisdom and knowledge. Their ability to resolve these world challenges will be available only if we preserve and strengthen institutions of higher learning.