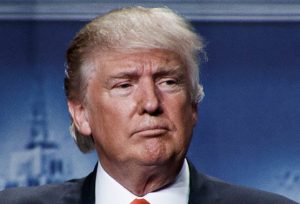 Online photos of the ten most recent American presidents reveal Trump to be the least likely to smile. Even gruff looking Presidents LBJ and Gerald Ford smiled about twice as often as Pres. Trump. The best theory of Trump’s smiling deficit is that he generally feels an unusually high volume of negative emotions including anger, insecurity, fear, unhappiness and even sadness (see photo). 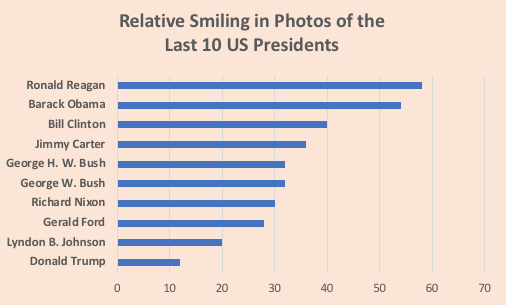 Note: The top 50 photos of each set represent the photos most often viewed online, not a random subset of all photos of President X in the universe.

Successful leaders often smile profusely because it makes others feel good and feel better about the smiler. One of the most popular American presidents was Ronald Reagan. Almost certainly this flowed in large part from his broad, genuine smiles that seemed to reassure Americans that he had their best interest at heart. President Trump has a different challenge than Pres. Reagan. 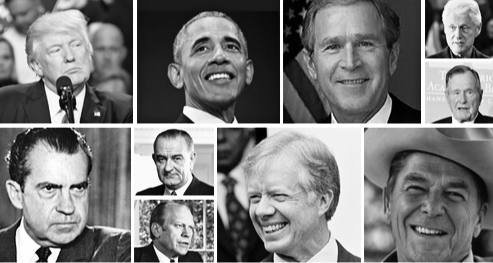 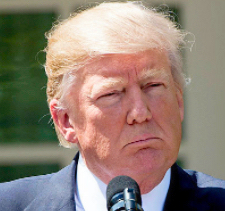 Trump’s supporters want him to be angry and belligerent in order to change the political system. Thus, Trump’s sneering and contemptuous smiling is OK for his supporters but not smiling as if he were happy about the state of American society. Malicious smiling also goes over well with his avid supporters because it indicates that Trump will aggressively keep his promises even if he has to be ruthless with other people.

Another explanation for Trump’s smile deficit can be derived from Trump’s difficulty in laughing. A lot of normal smiling results from humor and laughter. Smiling and laughing reveal that a person got the joke. Many articles have been written about how rarely Trump laughs in public. Leslie Savan in The Nation speculates that Trump is so “choked by self-deceit to get what’s so funny.” Someone who says “sad” as often as Pres. Trump may have trouble seeing the funny side of life.

Happy smiles serve two main functions: they express one’s inner state of contentment or pleasure and they signal to others that they can share in this state of positive emotion. Negative smiles like sneering and malicious smiling have a positive function also if the audience and speaker are on the ‘same wave length.’

Many of the 6,000 books on Amazon, which discuss Donald Trump, claim he is self-centered. And self-centered people tend to be relatively unhappy and depressed. This side of the President comes out when he tweets or gives impromptu news conferences. In his campaign rally speeches, he disguises this unhappiness by transforming the event into a battle cry. What begins as anger, fear, anxiety or belligerence ends as a victory celebration with a cheering crowd. 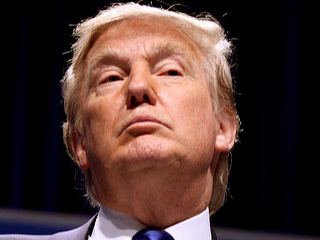 Trump expresses anger, belligerence, fear and hatred in his speeches, conversations and tweets. Thus, his negative emotions crowd out his expression of positive, happy moods. This is particularly true of anger and belligerence because of their dominance of facial expressions.

Trumpy is a teddy bear for sale that looks like Donald Trump and comes with such over-the-top self-promotion that is appears as both a promotional gimmick and spoof. The word Trumpy thus became a label that expresses the emotional complex of feelings produced by Trump sympathizers as they listen to his speeches making emotional and moral claims.

During Trump rallies, elation or euphoria dominate the cluster of emotions felt by receptive supporters. This crowd phenomena arises when Mr. Trump uses emotions such as fear, hate, and anger that match supporters emotions at the time.

McKenna Stayner writing in the New Republic believes that Trump actually does not have the ability to detect and distinguish his own emotions, but he has an uncanny skill to evoke a suite 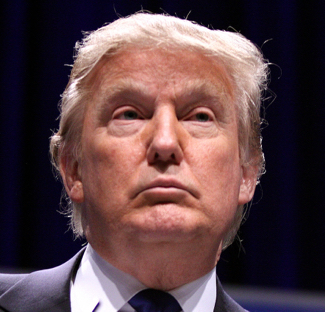 of emotions like fear, disgust or disbelief in his listeners.

At the same time Trump evokes terror and depression among those on the opposite political spectrum. They abhor Trump’s actions because they see Trump undermining standards of traditional humane morality and democratic politics.

While Donald Trump’s attack-dog approach to his job and his co-workers may account for his failure to smile, other explanations for his smile deficit should be considered. First, Pres. Trump could be just an unhappy person. Second, he may simply believe that his supporters want a leader with a bullying demeanor.

It may seem like smiling is a trivial matter compared to decisions about taking the country to war or improving the society. However, the absence of smiling is not trivial if in represents a mental problem or a mental incapacity like lack of empathy. As elaborated by David Graham in The Atlantic, Trump has a serious empathy deficit. Hundreds of writers noticed this problem after Trump failed to show adequate serious, compassionate concern for the victims of Hurricane Harvey, especially the Puerto Ricans. Other examples of Trump’s failure to empathize abound. For a nation to look to such a person for leadership seems risky and dangerous at best.

Smiling while Being Tough 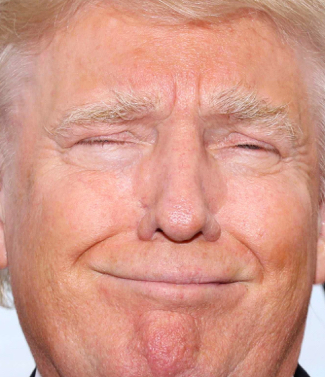 The New York Times and other news sources have reported that toughness, more than any other attribute, is what Pres. Trump sought to project during his campaign and the first year of his presidency. His aides encourage him to maintain his naturally sour, tough-guy disposition. Because of Donald Trump’s many years as a tough, insensitive reality TV star, his failure to smile continues to pleasure those who are entertained by his character. Some comments in online forums suggest that Mr. Trump avoids smiles to evade wrinkles appearing on his face. And some of Mr. Trump’s smiling pictures appear to be less than genuine. Some of these non-genuine smiles, where the ends of his lips curl upward, have been dubbed his ‘fish smile.’

Research on smiling has found that people who have recently been dishonest, unconsciously tend to use a manufactured smile expressing embarrassment. Because of Mr. Trumps smiles expressing such negative emotions, Mr. Trump’s aids may have advised him to minimize smiling in public.

Just like all recent American presidents, many photos have been taken of Mr. Trump smiling, especially when he is posing with his family. However, in his public speeches and interviews genuine smiles remain scarce. This pattern may result from expressing negative emotions, which squeeze out smiles that might spontaneously emerge from positive emotions.

I have noticed that the only time Trump seems to be genuinely smiling is in photos with dictators. Is there any research on this?