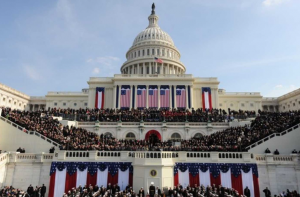 ‘America First’ was the major theme of the President Trump’s inaugural address. Only 1,400 words long, it’s implications produced shockwaves around the world. A news article by the Associated Press on Jan 21, 2017 reported how jittery it left many people in many far-off countries.

Almost everyone outside the USA said it was too focused on America. People in some countries that depend upon US resources, such as Afghanistan, were disappointed not to have been mentioned. But many in Muslim countries were grateful that President Trump did not mention the word ‘Muslim,’ because it would have had a negative connotation.

Mr. Trump did mention the word ‘trade’ in passing, but did not give any specifics. None-the-less, many in Japan, China, South Korea, and elsewhere worried out loud that the future would be worse and most certainly uncertain soon.

An analyst in Vietnam thought the speech implied a view of the American public as simplistic in that the speech only gave one vision, not a multi-faceted vision to represent a large, complex, educated society. Some Australians thought the speech was divisive, with too much bluster, when what is needed is unity and a vision of a complex world.

As if in answer to prayer, the next day (1/21/17) the Women’s March on Washington brought a more humane message to the Capitol, backed by an even larger crowd. Furthermore, huge rallies and marches simultaneously took place in big and little cities all over the world.

Where I live in Saint Paul, the capitol of Minnesota, police estimated that the march included 100,000 people, the largest protest march in the history of the S tate.

Each march had the opportunity to articulate its goals. Minnesota Women’s March statement of purpose stated was “We stand together in solidarity with our partners and children for the protection of our rights, our safety, our health, and our families — recognizing that our vibrant and diverse communities are the strength of our country.”

Throughout the world the protests emphasized human rights, especially women’s rights, emphasizing those that are threatened by the expected policy and legislative initiatives of the Trump administration combined with the Republican Congress.

Most importantly, their statement said “We stand together, recognizing that defending the most marginalized among us is defending all of us.” Their underlying theme supports the crucial value of what can be summed up in one word: humanity.

Whether a caring person’s values stem from their religion, from a philosophy of utilitarianism or simply a moral sense, the words humanity and humanitarianism capture the essence of what is almost totally missing from the nationalistic rhetoric of Trump and Trumpists as well as the ultraconservative, right-wing partisans that control the Senate and Congress.

The Meaning of Partisanship in America Going Forward

A book, Strangers in Their Own Land: Anger and Mourning on the American Right, published in late 2016 by sociologist Arlie Hochschild takes the position that political positions are best understood from emotions rather than thoughts. She concludes that the essence of understanding the conservative tenacity for blindness to suffering lies in their emotional attachment to ideological values and beliefs.

Hochschild developed a framework for thinking about political emotions and gives them the name of deep stories. Peoples’ deep stories are the emotionally flooded central ideas about what is wrong with society and how it can be fixed politically.

Hochschild concluded that conservatives low on the socio-economic ladder attribute differences of social class and race as matters of personal character. Their deep stories point us to the shoulds and shouldn’ts of feeling, to the management of feeling, and to the core feelings stirred by charismatic leaders.”

Equally important in her view, based upon in-depth interviews, is that many if not most conservatives hold onto beliefs about the effectiveness of conservative policies despite the factual evidence that these policies do not work economically.

After conducting 60 interviews of conservatives in the small Louisiana city of Charles River, Hochschild went to a Trump rally the day before the Louisiana presidential primary. The speech was typical of the hundreds that he gave at rallies during his presidential campaign.  What seemed both amazing and yet not surprising to Hochschild was the excitement and related emotions produced by simply being at the event and being reassured that Donald Trump was expressing their deep feelings. They could feel safe because Trump was going to change things for the better.

These deep stories explain only part of complex American political behavior. Another piece of the puzzle is that despite evidence to the contrary, conservative partisans believe in a variety of assumptions that lack any basis in fact.

The system of groundless beliefs that she investigated dealt largely with environmental degradation and regulation. The State of Louisiana, under Tea Party domination, for nearly a decade experimented with deregulation and huge monetary incentives to the oil industry. In turn the economy and personal wellbeing declined. Yet, the conservative partisans still hung onto their beliefs that deregulation and corporate incentives were necessary to solve their personal and State economic problems.

In a side analysis of US counties nationally, she and her associates found that the higher the exposure to environmental pollution, the more likely the conservatives were to seek less environmental regulation. Hochschild does not try to explain this paradox as simply ignorance, but instead views it as an unwillingness to question and give up opinions and beliefs that give them comfort and seem to add a “coherence” to their view of the political world.

Hochschild lists 12 common unsubstantiated conservative beliefs such as the belief that “State subsidies to industry help increase the number of jobs.” Another common unsubstantiated conservative belief is that “Welfare rolls are up, and people on welfare don’t work.” These beliefs were common, especially among political conservatives, not only in Louisiana, where the interviews were conducted, but nationwide as well. After each of these political belief statements, Hochschild presents the “fact-checked” data. The latest economic and political factual evidence do not support these strongly held beliefs of most conservatives.

This anomaly applies to the nation: red states are more polluted than blue states. And yet conservative and Republican individuals tend to brush aside the environment as an issue, and to suffer the consequences by living with higher rates of pollution. Louisiana is just one extreme example of the politics-and-environment paradox seen across the nation. And the environment is just one of many issues about which partisan beliefs do not logically coincide with the best knowledge available about the problem.

This analysis of political thoughts and emotions is much more than an academic sociological research theory. Many people suffer greatly and even die from water and air pollution and other social problems due to political neglect of social well-being. In other words, failure to appreciate and value humanity results in great suffering at home and abroad. Thus the current right-wing coalition between nationalism and conservativism rejects any need for caring about global humanity or even the American poor and needy.

This analysis applies to poverty, human rights, and other social aspects of human life. Millions of people around the world are trapped by structural barriers to upward mobility, human dignity, and freedom. Yet many conservative partisans continue to believe that those trapped are trapped by their own laziness or lack of character. And white nationalists continue to believe that Americans are trapped by the onslaught of nonwhite immigrants and criminals. Such widespread beliefs block amelioration of these problems, so living conditions worsen and wellbeing collapses.

Not only does the narrow-minded nationalism implied by the Trump inaugural slogan ‘America First’ get in the way of solving American problems of poverty, inequality, and dignity, but it curtails world progress as well.

Thanks for this informative commentary. One thing I infer from it is that many in the public will believe the lies, even the most obvious and egregious ones, of the administration and its allies. But I am hoping that the mainstream mass media will not be intimidated or give in to the lying and will challenge government lies much more often that the media has in the past.