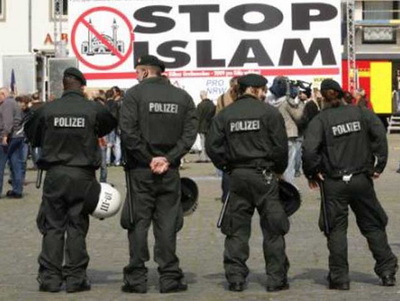 Social suffering has become a common label for the suffering of a group of people who serve as targets of disdain, hate and cruelty by another group or a society. The target group becomes the victim of humiliation, bullying, persecution, discrimination, aggression and/or hate. Social stigmas are the mechanisms that lead to discriminatory behavior and social suffering. Not only does social suffering arise from hurtful racism or sexism, but disability, poverty, mental illness, and other things that can spark hateful behavior that ends in social suffering.

Slavery of any kind indicates social suffering as does the rejection, and aggression felt by immigrants and refugees. Border fences, special police searches, and hate crimes all are signs of social suffering. Fences and police can be signs of security needed for the rule of law. Good judgment and humane values are always needed in security decisions.

Social suffering often becomes intertwined with physical suffering through violent acts of hate. This tragic combination is illustrated in Isabel Wilkerson’s book: The Warmth of Other Suns: The Epic Story of America’s Great Migration (Knopf Doubleday), as she tells Great Migration stories of former slaves moving from southern to northern United States.

Called the Great Migration, between 1915 and 1960 about five million southern blacks moved to the north. Like the 2016 immigration into Europe, they escaped an unsafe homeland. Many of her interviewees said they moved away from the Southern United States because every night they listened for a lynch mob, not knowing if they would live through the night.

Unfortunately, nearly 100 years later their descendants in Northern cities remain fearful of being lynched when they go out at night, because the “rope has been replaced with a gun.” This alludes to the large number of unjustified or questionable killings of black men by white policemen in the United States during 2016.

Racism consists of prejudice, discrimination, antagonism and/or a sense of superiority toward one or more others of a different race. Sometimes the racism is unconscious and unintended. In many communities and societies, children learn racist attitudes and bias at early ages.

People don’t like to be accused of racism. President-elect Donald Trump during the 2016 election campaign talked about Black Americans and Middle Easterners in disparaging remarks. But when he was accused of being racist, he and his campaign staff denied it, claiming that the liberal accusers were racist because they raised the issue unfairly.

In a racially charged culture, it is likely to take many generations for racism to disappear. However, recent neuroscience research has found that a drug used for treating PTSD tends to reduce racial bias.

Westerners’ attitudes of fear and bias toward Muslims tends to be a combination of racism and xenophobia because people generally believe that they can identify Muslims by a combination of physical features, nationality and/or religious customs such as clothing and prayer.

Nationalism is either a positive or negative attribute depending upon whether it refers to patriotism or belief that one’s national identity endows its citizens with superiority. This has led some to say that there is good and bad nationalism. A better distinction has been made by economist Paul Collier. He proposes that we use the terminology of ‘inclusive’ or ‘exclusionary’ nationalism to distinguish between a nationalism that only emphasizes patriotism, versus exclusionary nationalism that emphasizes racial supremacy and/or xenophobic separatism.

In a separate post, I noted that right-wing populism is sometimes supportive of white nationalism in a European or American context. If exclusionary or exclusive nationalism approaches extreme forms, it begins to overlap with Nazism. And when combined with authoritarianism, it overlaps with fascism.

According to the United Nations Population Fund, 244 million people, or 3.3 percent of the world’s population, lived outside their country of origin in 2015. The Migration Policy Institute reports that the United States migrants total is 42 million or 13           percent of the 2014 population.

Due to the large number of violent conflicts worldwide, the number of immigrants, especially to Europe, has increased visibly during this past year. The large flows into Europe and the casualties in route have led to attempts to block their flow. Even more dramatic have been the political conflicts over policies to allow or disallow migrant entry into specific countries.

In fact, some experts attribute the wave of populism in the USA and the EU to the large influx of immigrants. Of course, the perceived threat of migrants has sharply increased with the spike in domestic terrorism. Migration in the present day can be treacherous, especially when it is illegal and involves crossing large bodies of water. Migration has become a major source of suffering and the growing xenophobia in the host countries has become a major source of social suffering.

Richard Spencer launched the ‘Alternative Right’ movement in 2010 to promote far-right ideals centered on ‘white identity’ and preservation of an extremely-right view of Western civilization. Today it is the a leading association of ultra-conservatives. They not only promote white nationalism but reject liberal views as well as those of the conservative establishment in America. One of their principal dissemination mechanisms is Breitbart News. Steve Bannon was chairman of Breitbart News and sympathetic with Alt Right viewpoints.

Though Donald Trump denies allegiance to Alt Right, many of his ideas and much of his campaign rhetoric reveals many similarities. Furthermore, Mr. Trump appointed Steve Bannon as his Campaign Manager in August 2016. In November after becoming President-Elect of the USA, he appointed Mr. Bannon as chief White House Strategist. Bannon will play the role of chief intellectual architect of policy initiatives of the Executive Branch of the US government. As Bannon formerly served as a Goldman Sachs banker, he will likely serve as the designer-in-chief of economic policy as well as trade policy and immigration policy.

Hate acts and hate crimes are prejudice-motivated actions intending to harm or scare one or more members of a discrimination-target group. In the days and weeks after the Presidential election, as white nationalists and others celebrated Donald Trump’s victory, a sharp rise in hate actions occurred. As reported by the Southern Poverty Law Center (SPLC), and shown in Figure 1, during the ten days following the election, there were 867 reports of harassment and intimidation across the nation. Many harassers invoked Trump’s name during assaults, making it clear that the outbreak of hate stemmed in large part from his electoral success.

The 867 hate incidents described here come from two sources — submissions to the #ReportHate page on the SPLC website and media accounts. Incidents were limited to real-world events, and do not include instances of online harassment or any kind of hoaxes.

The incidents documented here almost certainly represent a small fraction of the actual number of election-related hate incidents that have occurred since November 8.

The Bureau of Justice Statistics estimates that two-thirds of hate crimes go unreported to the police. As shown in the statistical chart, the predominant targets of hate incidents were immigrants, Blacks, and Jews.

Both the harassment since the election and the energy on the far-right are the predictable results of the campaign that Trump waged for the presidency — a campaign marked by incendiary racial statements, the stoking of white racial resentment, and attacks on so-called “political correctness.”

Rather than merely saying that he “wants to bring the country together,” Trumps actions must consistently demonstrate he is doing everything in his power to do so. Until president-elect Trump does these things, the hate that his campaign has unleashed is likely to continue to flourish. When the Trump administration begins to implement new race and immigrant related policies, the number of hate incidents might well rise.

Hate-based incidents of all kinds contribute to social forces within a society that when new race or immigrant exclusionary policies are unleashed without educational programs and policies to contain them, chaos could follow. The only result of which we can be certain is a substantial rise in social suffering. 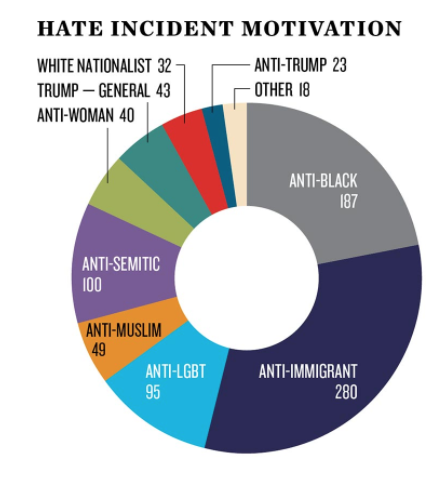 This article implies that the Alt Right and white nationalism are American political movements. However, according to the mass media, Breitbart News has set up organizations in several European nations. Also, as your leading photo suggests, protest demonstrations for white nationalism and against immigration have been more prevalent in Western Europe than in the USA.

Interesting and important things to think about. Things seem to be getting nastier, with more people at risk and more people doing ugly things to others. And we might only know a fraction of what is going on. But we may also be dealing with a change in how much is reported. Things may well have been as terrible, though at times terrible in different ways than now, throughout this country's history.