Suffering and the Rise of Populism 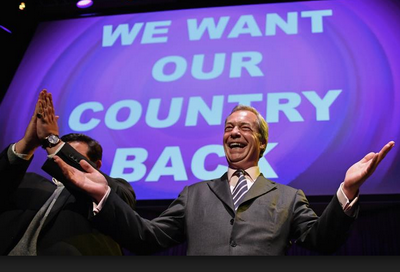 The year 2016 may be remembered as the year that right-wing populism grabbed a foothold in the English-speaking West. Donald Trump won the US election and the UK voted to leave the EU by their Brexit vote (see photo). Australia and other Anglophone countries appear less affected.

The election of Donald Trump has energized right-wing populist party leaders in France, The Netherlands, Germany, and Austria. Not only do these political developments threaten the future of the EU, but the existing world order may shift unpredictably.

The pervasiveness of the right-wing populist movements can be seen in the large number of European nations with large populist political forces. The list includes Austria, Czech Republic, Germany, Hungary, Poland, and Romania. As noted in a New York Times report, the populist movements in these countries, like the United States, are significantly stronger in rural areas and villages. Ironically, urban populations tend to be lumped with the establishment and elites by right-wing populists living in rural areas.

In 2016 the parties behind these right-wing populist movements tend to be additionally wedded to nationalism, anti-immigration, and even semi-authoritarianism. The latter may be surprising, but polling across the past 50 years shows that in both the USA and Europe, people are much less likely to say that “It is essential to live in a democracy.” For example, between 1930 and 1980 agreement with this statement of support for democracy dropped from 75% to 25% in the United States. In this same survey, significant plunges in public support for democracy also occurred in Australia, Britain, Netherlands, New Zealand, and Sweden.

The Freedom House 2016 report highlights that for the 10th straight year, their measures of global democratic freedom have declined due to the rise in authoritarianism and the curtailing of freedom of the press as well as other losses in democracy. This major drop in priorities for democracy would not be of such serious concern were it not for the decline in support for civil society and aid to developing countries during this period.

How do these political trends relate to suffering? A large share of the supporters of conservative populism across the Western world has been driven by perceived financial hardship, which implies suffering. Not only has perceived suffering disrupted the lives of the very poor and unemployed, but it has affected a sizable share of the middle class whose income has not risen as expected.

Right-wing populists in the United States exemplify this claim of hardship and suffering. The election of Donald Trump depended upon votes from demographic groups such as rural voters and those having lost jobs from globalization and/or free trade. Trump supporters consisted predominantly of white, middle class voters fearful of rising immigration, faster population growth among non-whites, and the decline of traditional values.

While many Trump supporters feel like victims of suffering, if their living conditions are compared to workers in the developing world or poverty pockets in America, their suffering seems minor at best.

Like almost all Americans, Trump supporters have a lifestyle that exposes them to daily barrages of advertising designed to get them to spend more than they can afford, buying products with a short time to replacement. In short, many Americans are predisposed to feel highly disadvantaged and suffering needlessly. While their suffering may seem minor to outsiders, many of them experience serious, ongoing depression, anger, and humiliation, adding up to overall life dissatisfaction. One of the main causes of this suffering is that we compare ourselves to those with relatively more income and wealth.

Many voters in both the USA and Europe feel serious distress in their lives because they fail to compare themselves to extreme sufferers who live in deep poverty.

If the so-called suffering middle class is truly concerned about reducing human suffering, it will not block all refugees from entering their countries. This is especially applicable to the devoutly religious who have a moral duty to alleviate the suffering of others no matter their race or nationality. We do not have a duty to bring dangerous terrorists into our country, but all major religions espouse a responsibility to care and help other human beings.

Some tend to repress and largely ignore the suffering of others. This attempt to escape from suffering may account in part for the ease by which large numbers of people can be indifferent to tragic suffering around the world.

Intense suffering uncovers an array of deeply human tragedies. Every major religion calls for compassion and aid for others who suffer, yet the number burdened with severe suffering continues to expand. The path of least resistance is to ignore the suffering of others. Those who reach out to others’ suffering may themselves suffer, but many feel joy from having reduced someone else’s suffering.

Very good analysis and important conclusions. But you left out white supremacy and homophobia. You should have articles on these topics.