Learning Alleviation of Suffering from Service-learning 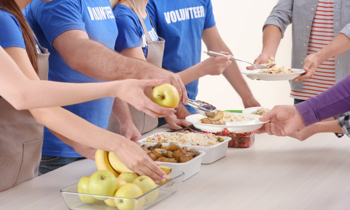 This is a summary of a longer report on service-learning by Med Wilkes Karraker. See author notes at the end.

Persons living homeless fill the human landscape in any large city around the world, including the United States. While the U.S. Census documents more than a half million homeless on any given day, 13.5 million (7.4%) of Americans experience homelessness over their lifetime (Link et al. 1995). In Minnesota (where the extreme winter temperature discourages many homeless from remaining in the state) almost 1% of the total state population) lack shelter (Owen and Gerard 2013).

How then do we socialize citizens to address the suffering associated with homelessness and other social problems in our communities?  In my chapter in Anderson’s most recent volume I considered the extent to which undergraduate students’ course experiences engaging one-on-one with people living homeless may change attitudes and future behaviors toward alleviating the suffering of homelessness.

Effects of Service Learning on Attitudes and Behaviors

Given the diverse qualities of service learning practices and the paucity of controlled, longitudinal studies, research on the effects of service learning on student achievement remains inconclusive. I conducted a semester-long, longitudinal study of undergraduate students in Introduction to Sociology classes at the University of St. Thomas. I found that students who engaged in service sociology with homeless people as part of an undergraduate course became:

This research reveals what can be accomplished in terms of outcomes related to alleviating human suffering with even a short-term experience. In particular, service learning can be an effective means to fostering civic engagement among undergraduates.

Higher education is one of the places where citizens gain the intellectual, scholarly, and personal tools to alleviate suffering. Professors who embrace service learning hope we are extending the socialization of students in the liberal arts to include growing commitments to this effort.

Note:   This article draws on my chapter “Socializing Students in Higher Education to Alleviate Human Suffering among the Homeless.” Pp. 397-410 in Alleviating World Suffering: The Challenge of Negative Quality of Life, edited by R.E. Anderson. New York: Springer, 2017.

Author Bio Brief: Meg Wilkes Karraker is Professor emerita. the University of St. Thomas in St. Paul, Minnesota, USA where she served as Family Business Center Fellow and University Scholar. In 2014, she was awarded the University’s John Ireland Presidential Award for Outstanding Achievement as a Teacher/Scholar. She currently consults with sociology programs as a member of the American Sociological Association’s Department Resources Group.