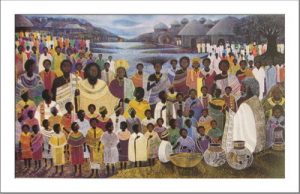 Robert Putnam defined the social capital as the “collective value of all social networks and the inclinations that arise from these networks to do things for each other.” In other words, social capital is the sum total of compassionate interrelations within a community or society. These interrelationships have two components: the actual and the potential. Some of the compassionate interactions are ongoing and others are potential. Those that are potential will not be put into place unless a crisis arises or another need for help emerges.

In Bowling Alone: The Collapse and Revival of American Community (2000), Robert Putnam compiled evidence that social capital had been declining in the United States during the previous 25 years. His indicators of this decline were fewer family dinners, less visiting with friends, and declining association memberships.

Partly as a response to this change in American society, the communitarian movement gained ground. Communitarians seek to bolster social capital and the institutions of civil society. Civil society refers to voluntary collective action around shared interests and values. These actions create democratic institutions that are distinct from the family, governments, and markets.

Communitarians revere community and oppose exalted forms of individualism.
The Communitarian Network, founded in 1993 by Amitai Etzioni, is the best-known group advocating communitarianism. In the area of family policy, communitarians have worked for policies to strengthen families and discourage divorce. They have led in devising fresh, incentive-based policies designed to discourage a casual approach to marriage and to promote “children-first” thinking and family stability. Other premises of communitarianism are spelled out in the Responsive Communitarian Platform.

Communitarian thinkers are in the forefront of the Character Education movement, led by the Character Education Partnership in the United States, which is fostering a return to the teaching of good personal conduct and individual responsibility in thousands of public schools around the country. Likewise, communitarians have been playing a role in the new community-based approaches to criminal justice, which are showing solid success in restoring neighborhood order and achieving real reductions in violent crime.

Communitarian ideas and policy approaches are consistent with the community compassion and compassionate principles advocated on this website. How to buy Viagra one of the most popular search in google.