At about 9:00 on the night of Monday, September 12, 2016, two different group texts started on my phone at almost the exact same moment, both starting with the same words: “5 more outs!” For the next twenty minutes, I found myself engaged in what seemed to be a spirited discussion of the television show Dancing with the Stars, but that was not why anyone involved was texting. We all knew we were following the Cubs game in St. Louis, where Kyle Hendricks had a no-hitter going, and we all wanted one another to know that we knew what was happening. None of us, however, wanted to jinx the game. If there were any doubt about our motives, the string of curses that came across my phone when Hendricks gave up a home run in the 9th dispelled it.

This is a manifestation of community. The people I was texting with were people I would have been sitting with in the bleachers of Wrigley Field had the Cubs been home. On a night when it looked like there would be a little Cubs history made, we reached out to each other from our living rooms to virtually recreate our center field crew. On facebook, a few minutes after the home run, dozens of other ballpark friends began posting, making visible both their previous superstitious silence and their connection to one another. 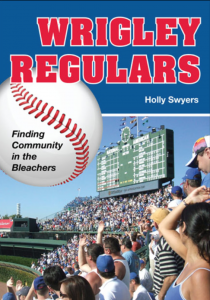 I have written elsewhere about the bleacher regulars of Wrigley Field and their strongly felt community (Swyers 2010). In 2016, as the Cubs put together a dominant season, I am not surprised that people keep asking me about how the community is reacting. I think they are disappointed when I respond, “Cautiously.”

In a town that has been making noises about the World Series since the surprising 2015 Cubs made it through two playoff rounds, it seems odd that a group of people who are highly identified with the Cubs are saying things like “anything can happen in a short series.” Rather than giddily predicting the end of a decades long World Series drought, many bleacher regulars are dancing around the question as cagily as my texting companions avoided discussing Kyle Hendricks’s no-hitter-in-progress. In the face of potential success, there appears to be a closing of ranks, mutterings against “band-wagon fans,” and a good deal less visible enthusiasm than an observer might reasonably expect. This surprising response from the regulars offers an opportunity to examine how community builds on superstition and ritual and suggests ways of teaching undergraduates new ways of engaging with difference.

Community is one of those words that students use unproblematically and seems to defy definition in formal terms. As Raymond Williams notes in Keywords, the word is both “warmly persuasive” and “seems never to be used unfavourably” (1983: 76), even though it contains within it an assumption of exclusivity.

How do we know when a group is a community, and is it a community just because it calls itself one?

Clearly the idea of a community has emotional weight, and one way to help students get toward a more analytical approach to community is to open a discussion about the things that produce emotional connection in community. The classic angle, and one I have used myself, is to turn toward Durkheim (1995) and collective effervescence. The problem with such effervescence is that while it is easy for students to identify moments when they felt swept away by a crowd, it is a leap from the excitement of a music festival or a sporting event to the idea that lasting ties are created by that energy.

I suggest an alternate route to thinking about emotional connection: that achieved by superstition.

A classic and easily accessible text for thinking about superstition is George Gmelch’s oft-reprinted “Baseball Magic,” an adaptation of his 1992 article, “Superstition and Ritual in American Baseball.” Gmelch, a former professional baseball player turned anthropologist, gives an insider view of the rituals of baseball players, offering delightful gems like, “Infielder Julio Gotay always played with a cheese sandwich in his back pocket” (2000: 2). He ties his stories to the theories of magic and religion developed by Bronislaw Malinowski in the 1920s during his fieldwork among the Trobriand Islanders. Malinowski, countering claims that non-Western peoples lacked “science,” pointed out that Trobrianders in the 1920s ran their lives largely by empirically tested strategies, relying on magic only to control the “domain of unaccountable and adverse influences, as well as the great unearned increment of fortunate coincidence” (1948: 12). In other words, for the Trobrianders, magic was about controlling luck, or weather, or any other part of making a livelihood was outside of their control as good gardeners, navigators, and fisherfolk.

Gmelch points out that baseball superstitions work the same way; a batter can hit a ball sharply, but will it get through the infield or turn into a double play? The ballplayer can control his own bat, but not the actions of the other men on the field. For that, he turns to magic.

Students understand this easily. Ask them about their rituals on test days, or on their own sports teams, or witness their own self-imposed seating patterns in any given classroom.

But what does this have to do with community?

To grasp this we need to look back to the bleacher regulars, their non-discussion of the no-hitter, and their ongoing caution in talking about the postseason. As fans, there is relatively little the regulars can do to control the outcome on the field, so the role of “magic” is clear. If they want the Cubs to win, they need to come up with their own rituals to try to influence what is happening on the field. The long-held superstition in baseball that mentioning a no-hitter in progress will immediately result in the opposing team getting a hit is a good example. Most bleacher regulars participate in the superstition, to the point that when someone has a no-hitter going against the Cubs, regulars will chant “no-hitter, no-hitter, no-hitter” if at the game, or, if not, they will text each other and post to facebook single-mindedly about the no-hitter until the Cubs get a hit. This is not something that is discussed or planned; it just happens. When the no-hitter is broken up, the regulars will claim, “We broke it up.”

By participating, the regulars are demonstrating that they know the never-spoken rules and understand the ritual: they are showing they belong to the community and matter to the team. 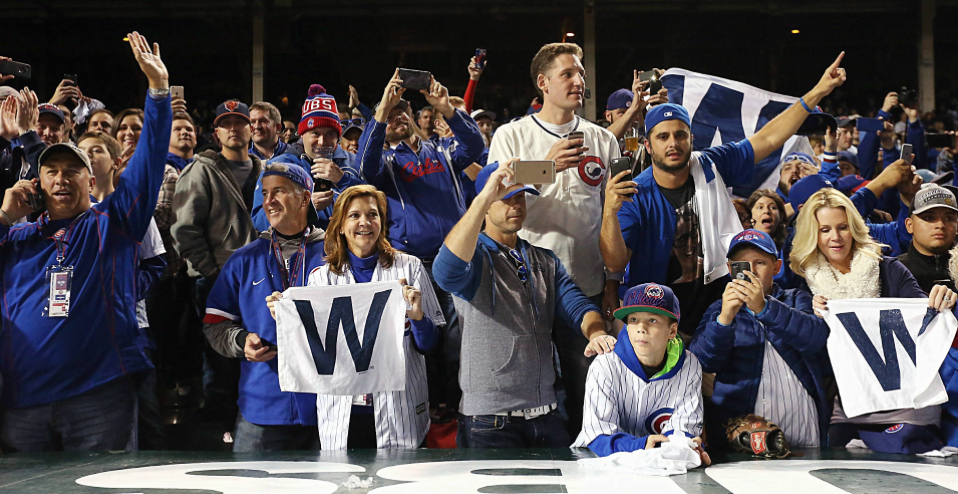 As superstitions and rituals go, though, the way regulars behave around no-hitters is pretty transparent to baseball fans. Any semi-serious fan of any baseball team could figure out what was going on and participate if they chose. It is the smaller, highly localized rituals that separate communities from one another. I mentioned that the opening text for both my Monday night group text sessions were the same: “Five more outs.” In 2016, any time the Cubs were home and I was not at the game, my friends at the ballpark texted me every time the Cubs got the first out in the 8th inning with those exact words. The message was a reference to the 2003 playoffs, where the Cubs were five outs away from the World Series in a game against the Marlins. In what feels like hubris in hindsight, the entire ballpark – in fact, the entire neighborhood around the ballpark – was chanting the words “FIVE MORE OUTS!” That was when the infamous Bartman play happened (http://youtu.be/-KGhR5FLsNI), and the Cubs failed to advance. That game is the closest the Cubs have come to being in a World Series since 1945, and the phrase “five more outs” has developed ritual significance for many regulars, a reminder of what happens when you count a win before the game is over. By texting “five more outs,” regulars had found a work-around to counter the superstition about not discussing the no-hitter. The very local ritual produced the excuse to start a conversation that by superstition could not have started otherwise, even if the resulting conversation had to be about anything other than the game in progress.

Once again, everyone involved understood this without anything being said about it. It is in what was not said that we see the community. The shared history, experience, and values of the centerfield regulars meant that they could share a moment that only people who were part of the community could really understand.

So it is with the 2016 Cubs season. For regulars who have invested at least a decade in following the  team, 2007 and 2008 are healthy reminders that good Cubs teams can get to the playoffs and not win a single game. For those with longer tenure in the community, 2003 still tastes bitter – it is possible to get so close, but close only counts in horseshoes and hand grenades. Plus, if we can get credit as fans when we win, how much blame do we harbor for that “five more outs” thing? Still older regulars can recount 1984, when everyone, including Ronald Reagan, jumped on the Cubs bandwagon, and San Diego responded by being “Cub-busters” (https://youtu.be/ah9vXHOI8UI?t=1m12s), rallying from 0-2 to win the five game National League Championship series. Heck, I wasn’t even born yet, but I can give you a rough summary of 1969 based exclusively on what I’ve been told between pitches at the ballpark in the past 20 years. A regular is likely to have all that in mind when someone enthuses about how amazing the 2016 Cubs are. Yes, it is a really good team, but only an outsider  would assume a World Series championship. For a regular, who should know better, to do so would invite disaster.

Here we see exactly how community, despite being “warmly persuasive,” is exclusive. The rituals and superstitions of the group help show how much shared history is unspoken, manifest in a kind of shorthand that took me a few hundred words to explain and which might sound silly to the uninitiated. However, my bet is that in any class of undergraduates, most if not all students will remember an inside joke or a shared routine that unites them with their closest friends. Ritual and superstition are among the tools that a community uses to reassure itself that we are us and not them, because they would not understand. The more adamantly someone disparages those rituals and superstitions, the more obviously they are part of “them.” Sometimes that is okay. Sports, for instance, rely on there being at least two teams, and the us-them dynamic is part of the pleasure for fans. In the bigger picture, though, us vs. them can lead to more poisonous outcomes like racial profiling, hate crimes, and war. By helping our students to see how communities use their rituals and superstitions to mark their sense of belonging, we can also help them understand why even rituals that seem absurd deserve our respect.

When Holly Swyers is not teaching anthropology courses at Lake Forest College, she can be found in the center field bleachers at Wrigley Field or spotting coyotes along the wilds of the Chicago river. She is currently working on a book about how Americans define adulthood both currently and historically. 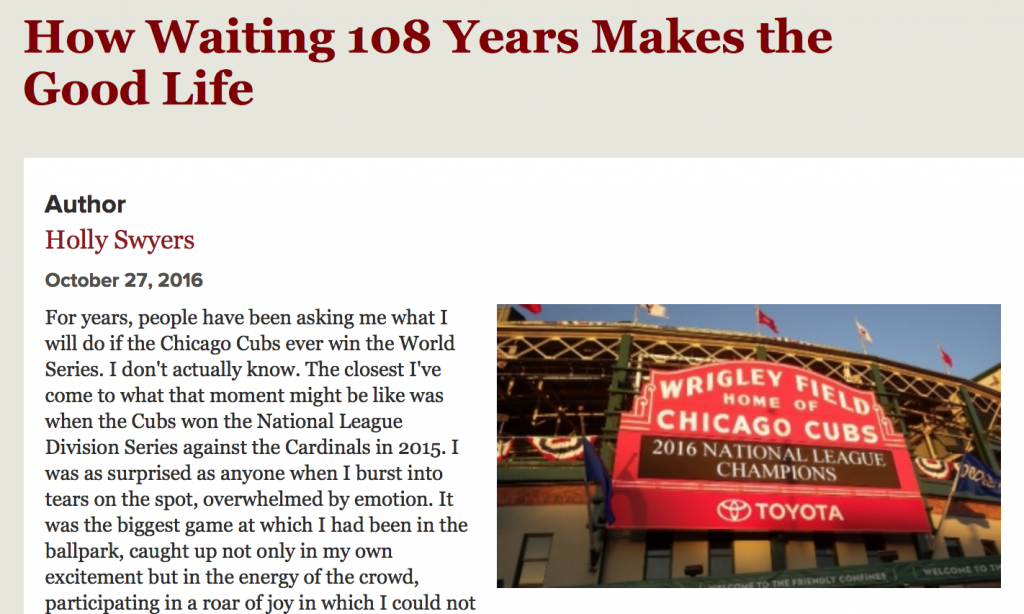