Riffing on neologisms like mandles (candles for men), guyliner (mascara for men), and bronuts (donuts for men), comic Zach Weiner explores a dystopian future in which men masculinize their language beyond all recognition. It’s great. See the whole thing here!

The Sexual Politics of Veganism

Carol Adams has written extensively on the sexual politics of meat, arguing that women and other animals are both sexualized and commodified to facilitate their consumption (both figuratively and literally) by those in power. One result has been the feminization of veganism and vegetarianism. This has the effect of delegitimizing, devaluing, and defanging veganism as a social movement.

This process works within the vegan movement as well, with an open embracing of veganism as inherently feminized and sexualized. This works to undermine a movement (that is comprised mostly of women) and repackage it for a patriarchal society. Instead of strong, political collective of women, we have yet another demographic of sexually available individual women who exist for male consumption.

Take a browse through vegan cookbooks on Amazon, for instance, and the theme of “sexy veganism” that emerges is unmistakable: 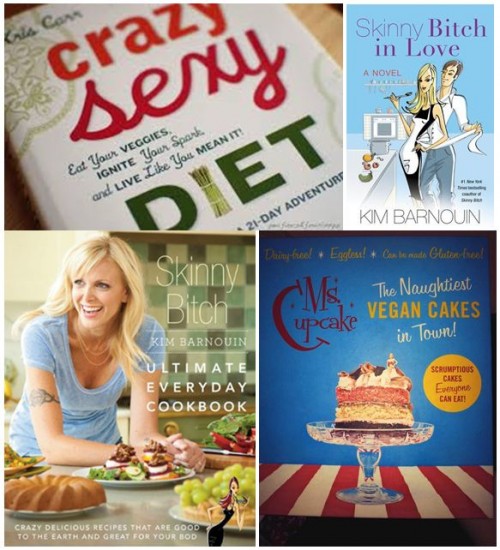 Oftentimes, veganism is presented as a means of achieving idealized body types.  These books are mostly geared to a female audience, as society values women primarily as sexual resources for men and women have internalized these gender norms.  Many of these books bank on the power of thin privilege, sizism, and stereotypes about female competition for male attention to shame women into purchasing. 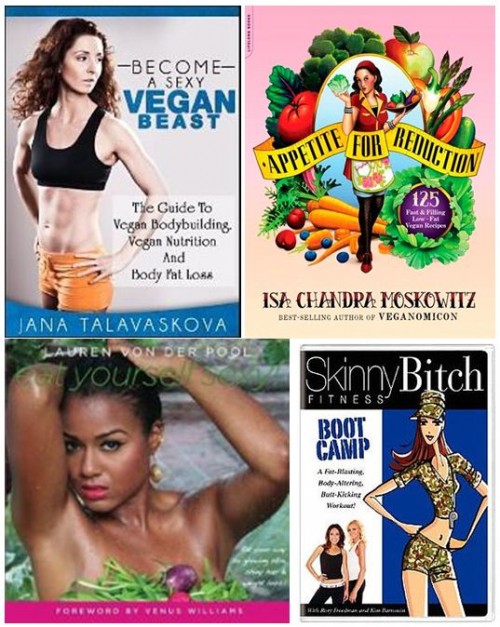 To reach a male audience, authors have to draw on a notion of “authentic masculinity” to make a highly feminized concept palatable to a patriarchal society where all that is feminine is scorned.  Some have referred to this trend as “heganism.”  The idea is to protect male superiority by unnecessarily gendering veganism into veganism for girls and veganism for boys.  For the boys, we have to appeal to “real” manhood.

Meat Is For Pussies (A How-to Guide for Dudes Who Want to Get Fit, Kick Ass and Take Names) appears to be out of print, but there are others:

Then there is the popular tactic of turning women into consumable objects in the exact same way that meat industries do.  Animal rights groups recruit “lettuce ladies” or “cabbage chicks” dressed as vegetables to interact with the public.  PETA routinely has nude women pose in and among vegetables to convey the idea that women are sexy food.  Vegan pinup sites and strip joints also feed into this notion.  Essentially, it is the co-optation and erosion of a women’s movement.  Instead of empowering women on behalf of animals, these approaches disempower women on behalf of men. 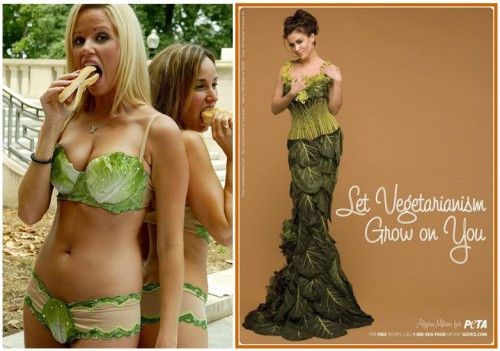 In sum, vegan feminism argues that women and non-human animals are commodified and sexualized objects offered up for the pleasurable consumption of those in power. In this way, both women and other animals are oppressed under capitalist patriarchy. When the vegan movement sexualizes and feminizes vegan food, or replicates the woman-as-food trope, it fails to acknowledge this important connection and ultimately serves to repackage potentially threatening feminist collective action in a way that is palatable to patriarchy.

Corey Lee Wrenn is a Council Member for the American Sociological Association’s Animals & Society section.  This section facilitates improved sociological inquiry into issues concerning nonhuman animals and is currently seeking members. Membership is $5-$10; you must be a member of the ASA to join.

Cross-posted at the Vegan Feminist Network and Pacific Standard.

In order to be successful in many parts of labor market, women must exhibit traits that are typically considered “masculine.” The title of a fashion article in Glamour magazine hints at — okay, blatantly states — this reality:

Man Up, Ladies! That whole menswear separates look is so hot right now. (Suits, layers, plaids, you name it.) We’d promote you instantly!

The article reinforces the idea that masculine characteristics are favored in many white collar jobs. In contrast, feminine characteristics carry a negative connotation, like when a New York Times article conflated being feminine and an undesirable employee when they contrasted the positive attribute of being “productive and results-oriented” with being a “sissy.”

Women can do masculinity, then, to reap some of the rewards offered to those who embody it, but there’s a catch: women must maintain their “femininity,” too. Women face gender rules that require that they wear makeup in order to be seen as beautiful and competent. Not doing so brings costs.

One study, for example, compared viewers’ perceptions of females with varying degrees of make-up, ranging from no make-up to glamorous. Research participants were shown photos of female faces and asked to rate the images on attractiveness, likeability, competence, and trustworthiness. Respondents rated the faces wearing make-up higher on likeablility, competence, and especially attractiveness, compared to the faces with no make-up.

These gendered behavioral and beauty norms amount to a double-edged sword for women.  They must do masculinity to be successful at work, but they must be feminine to get along.  So, man up, ladies… but not too much.

Chloe Albin is a senior at Chapman University studying dance and psychology. Dr. Georgiana Bostean is an assistant professor teaching sociology and environmental science and policy. She studies population health. 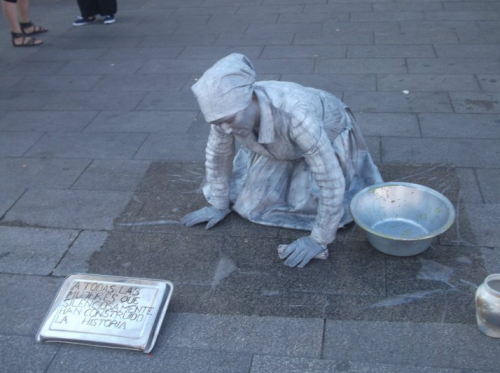 The paradox: masculinity is strength, power, and dominance… but femininity is terrifying. Gender rules insist that men must avoid association with the feminine at all costs because, if they do not, they are weak.  They are pussies, bitches, women, girls. Femininity is weakness and yet, oddly, it has the power to strip men of their manliness.  It is as if, as sociologist Gwen Sharp once put it, “masculinity is so fragile that apparently even the slightest brush with the feminine destroys it.”

Behold the best example of this phenomenon ever:

Let’s be clear.  The reason he’s afraid of femininity is because it’s reviled.  It makes you a woman, which makes you worthless.  Which is fine for the ladies, but dudes are advised to avoid personal denigration if at all possible.

Thanks Summer’s Eve, you make my job easy.

Men Go on “Guyets” Because Girls are Stupid

The Ethical Adman’s Tom Meggison sent along a new ad campaign by Molson.  The campaign coins the word “guyet,” a supposedly masculine alternative to “diet.”

If dieting is working out in order to be thin, then guyeting is “working out to justify eating the foods you love… Bacon, nachos, and burgers.” 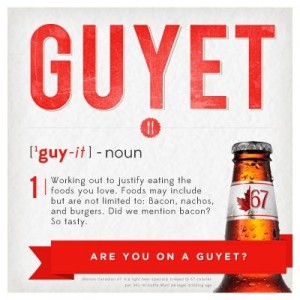 There’s a very simple thing going on here: things associated with women are NOT-FOR-MEN, so anything that rings feminine must be  masculinized. See, for lots of examples, our Pinterest page on the phenomenon with almost 100 examples.

Importantly, this isn’t just about maintaining a strong distinction between men and women, it’s about maintaining gender inequality.  We disparage and demean femininity, which is why men want to avoid it.  Listen to the tone of voice that the narrator uses when saying the word “diet” at 21 seconds:

Dieting is stupid ’cause girls and everything associated with girls is stupid.  Guyeting is awesome ’cause guys are awesome.

The reverse doesn’t apply. Women who do things men like to do — drink whiskey, play sports, become surgeons, have dogs, etc — somehow rise in our esteem.  Men’s worth, in contrast, is harmed by their association with femininity.  This is a layer of gender inequality above and beyond sexism, the privileging of men over women; it’s androcentrism, the privileging of the masculine over the feminine.  Since women are required to do femininity, it means being required to do trivial, demeaned, and disparaged things.  Meanwhile, men have to come up with stupid excuses for participating in basic healthy activities like going for a jog.

More posts on androcentrism: “woman” as an insult, being a girl is degrading, making it manly: how to sell a car, good god don’t let men have long hair, don’t forget to hug like a dude, saving men from their (feminine) selves, men must eschew femininity, not impressed with Buzz Lightyear commercial, dinosaurs can’t be for girls, and sissy men are so uncool.