Men and women are told, in a myriad of daily ways, that being masculine is good and feminine bad. It sneaks into our daily language in ways that are so common that we fail to even see it anymore. For example, a recent New York Times article about Google’s effort to determine what makes managers successful featured a list, written by Google, of what makes a good boss.

The New York Times added the phrase “Don’t be a sissy” to “Good Behavior” #4.  It reads “Don’t be a sissy: Be productive and results-oriented.”   It’s the only Good Behavior that includes a derisive slur. And while I’m accustomed to seeing terms like “sissy” thrown around as insults, it occurred to me that the very next rule #5, “Be a good communicator and listen to your team,” could easily have been prefaced with “Don’t be a man.”

But being a “sissy” (that is, feminine) is something that we can all agree is bad, while being a man is good.  So, even when the rules suggest that men take on feminized traits, they’re unlikely to adorn the suggestion with a denigration of masculinity. 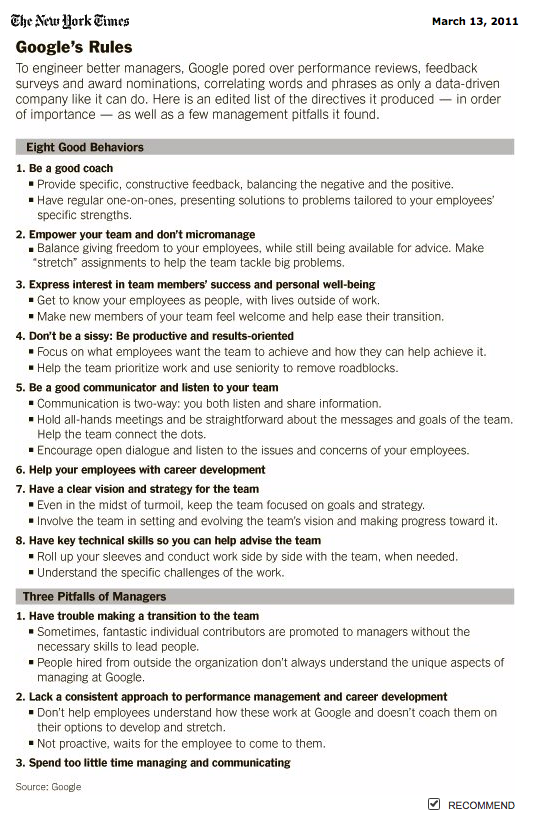 Via Teppo at OrgTheory.

I'm not even sure what they mean by "sissy" in this context. Typically "sissy" is used as a stand-in for "weak", but I fail to see how the weak/strong binary applies directly to being "productive and results oriented".

Regardless of its meaning, the construction of #4 is out of place in the first list, which is supposed to enumerate "good behaviors"; wouldn't "sissiness" be a "pitfall"?

The problem here is that you're translating "sissy" or "being able to communicate" into a feminine trait, thereby acknowledging and reinforcing the concept of traits that can be "feminine" or "masculine."

I never even realised 'sissy' implied a feminine trait - I thought it just meant someone weak or cowardly. (I've just googled it and found out it's a shortening of 'sister', so clearly it is in fact a gendered slur, but I'm just not sure everyone realises that).

I wonder why they even added 'Don't be a sissy' to point 4? It doesn't really add anything, they could have just said 'Be productive and results-orientated' without losing any meaning.

it occurred to me that the very next rule #5, “Be a good communicator and listen to your team,” could easily have been prefaced with “Don’t be a man.”

I'm reading this as an implication from Lisa that men are poor communicators and don't listen to their teams. Since this article is supposed to be a criticism of gendered slurs, why is there a gendered slur embedded in the commentary itself?

Lisa is grasping for straws here, in my opinion. I like the site, but Lisa in particular has a tendency to stretch things a little bit too far to make arguments that sexism/racism/classism are hidden beneath something that is actually far more innocuous than she thinks.

Is it possible that the wording is the New York Times'? There's a typo at the beginning, so I suppose this was very casually done. The "don't be a sissy" could be an attempt at making boring rules sound more interesting.

I have a name that is very difficult for young children to pronounce. When my younger brother was little, he couldn't say my name properly and couldn't say "sister" either, so he resorted to calling me "Sissy". Even now that he's old enough that he doesn't call me that anymore, I still consider it a special name that he gave me that denotes a special bond that we have.

The idea that it is usually used as an insult is very offensive.

What's with all these people leaping to defend Google and NYT? They used an inappropriate gender-biased word that should not have made it past the draft stage, let alone into publication. Their bad. End of story.

I think you're reaching with this one.

I am always struck by how viciously and vociferously the commentariat of this site defend their point of view. Do you think if you had a more substantial argument, perhaps you wouldn't need to call other people's points of view "Half-baked" or "sexist?"

Maybe you're all just too lazy to defend your viewpoint in any legitimate way, instead simply assuming that you are correct and that other people's opinions are clearly inferior and not worth your time. isn't that the exact attitude you're fighting against? Is this really just a new installation of intolerance, replacing the old not with tolerance, but with more intolerance?

dont mean to be nitpicky but "myriad of" is not the correct usage of the word.

myriad replaces the word many or multiple...

This is absolutely ridiculous. YOU are assigning/perpetuating those gendered meanings onto the text. This completely illustrates a hypersensitive double standard of reflexive feminist critiques.

On this very same site, I just viewed a page full of "Men are people, women are women" examples and noticed that many seemed to take issue with commercial products unnecessarily targeted towards women with a) the overuse of pink or decorated fonts etc., b) segregating everyday items like deodorant in separate gendered categories, and c) segregating clothing and t-shirts as "unisex" and "women's". Like many other examples on the page, I could agree with a majority of these product issues - I had to buy a weekly planner last week branded as "Organiz-her" and had a little bit of a gag reflex.
However, some variation is not some unspeakable crime, seeing as how human beings are sexually dimorphic animals and typically have definitive differences in size, morhphology, and behavior...It's science. There are biological and cultural exceptions, yes, but I'm talking overall species biology here and I'm referring more so to clothing differentiation in size/shape.

My point being, if you see a necessity in de-gendering every product and human reference on the planet, HOW IS IT that you are, here, taking offense at verbiage by assigning a gender to it? You are bewilderingly propagating discriminatory discourse by claiming it as *your* own - as a female - derogation.
Conversely, "being a good communicator and listening to your team" is supposed to be a MALE trait?? How am I not supposed to feel sexually derided by YOU here? You missed the mark big time on this one, and you're doing your part to discredit the whole of ideological feminism by this logically fallacious line of thought.