Political Polarization in the U.S. and Social Inequalities

Democrats and Republicans are deeply divided. By definition, political parties have differences of opinion. But these divisions have widened. Twenty years ago, your opinions on political issues did not line up the way we have come to expect them. Today, when you find you share an opinion with someone about systemic racism, you’re more likely to have like minds about environmental policies, welfare reform, and how they feel about the poor, gay and lesbian people, immigrants and immigration, and much more. In other words, Democrats and Republicans have become more ideologically consistent in recent history.

You might think ideological commitments naturally come in groupings. But there are lots of illogical pairings without natural connections. Why, for instance, should how you feel about school vouchers be related to how you feel about global warming, whether police officers use excessive force against Black Americans, or whether displays of military strength are the best method of ensuring peace?  The four issues are completely separate. But, if your Facebook feed looks anything like mine, knowing someone’s opinion about any one of these issues gives you enough information to feel reasonably confident predicting their opinions about the other three. That’s what ideological consistency looks like.

The following chart visualizes the proportions of Americans who say there is “a lot of discrimination” against Black people, gay and lesbian people, immigrants, transgender people, as well as the proportions of Americans who oppose laws requiring transgender people to use bathrooms that correspond to their sex at birth. And you can see how Americans identifying as Democrat and Republican compare. 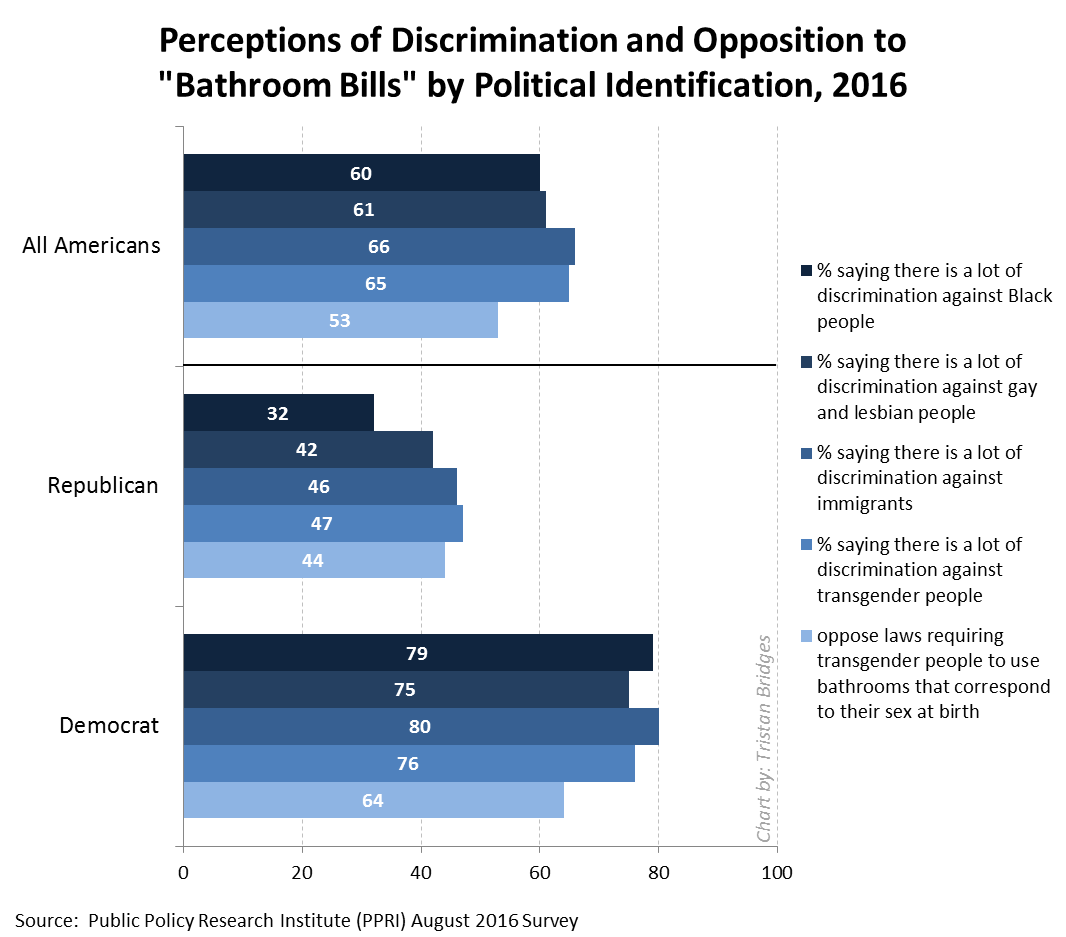 The majority of Americans understand that social inequalities exist and that discrimination against socially marginalized groups is still a serious problem. By that, I mean that more than half of Americans believe these things to be true. And data support their beliefs. But look at the differences between Democrats’ and Republicans’ opinions about important forms of discrimination in U.S. society. The gap is huge. While just less than 1 in 3 Republicans feels that there is a lot of discrimination against Black people in the U.S., almost 8 in 10 Democrats support that statement. That’s what political polarization looks like. And Pew found that the trend is even more exaggerated among voters.

Political Polarization in the U.S. and Social Inequalities – Inequality by (Interior) Design — March 6, 2017

Hi Tristan, I remember you teaching drop-in lectures in my sociology and SWAG courses at UVA. I've been following Sociological Images for nearly a decade now (whoa...) and you are KILLING IT!

No other will screw the poor as Trump! Prepare to suffer, buy painkillers NOW! And lubricants to :-) – Goinn' Nowhere — March 7, 2017

[…] Political Polarization in the U.S. and Social Inequalities […]

[…] It’s been said that ideologies make life simpler because they provide an easy template to live by.  In Western Culture, the Left says this, the Right says that, and one thinks the other is wrong.  On social media I’ve watched people unfriend each other because of differences in ideological thought.  In the short term that’s a lot easier than crossing the aisle to understand each other and share ideas in the grey areas.  Or maybe we’ve lost our ability to question and explain ourselves.  The floor where we had previously contemplated ideas and resolved conflict is increasingly becoming a wall.  […]

I am glad that thanks to your article I got to know such a wonderful and interesting person closer. I had previously heard about his work but never delved into the details. His story reminded me of a book I read about on https://phdessay.com/essay-to-the-young-women-of-malolos/
with articles by a famous author. His essay: “To the Young Women of Malolos” is like a real manifesto against gender inequality, slavery, fraud and abuse. I have always admired the work of this man and am very glad that I can freely observe his work.

The United States today is a country that is deeply divided. Political polarization has led to a divide between those who identify as liberal or conservative, and this has had a major effect on social inequalities in America. This divide has been caused by various issues and topics such as immigration, healthcare, and the economy, and it has led to a lack of unity and understanding.
The effects of this political polarization are evident in the increasing social inequalities in the U.S. The wealthy have become wealthier while the poor have become poorer. Furthermore, the divide in education and access to resources have become even greater. This has led to higher levels of poverty and inequality among different racial and ethnic groups. The rising levels of inequality have also been linked to higher levels of crime and violence in certain areas. Additionally, this polarization has resulted in a lack of trust in government institutions and leaders.