Trends in the Polarization of U.S. Politics

If you pay much attention to politics in the U.S., especially during this presidential election year, you’ve probably heard someone assert that politics is getting more polarized — that is, that there is less consensus and fewer people in the middle, making it more difficult to agree on policies or get anything done. But is it true?

A recent Pew poll sent to us by Katrin indicates that it is. The Pew Research Center has tracked responses about 48 political values for over 25 years now. Over time, the percentage-point gap between Democrats and Republicans has nearly doubled: 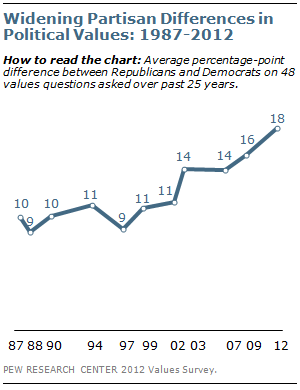 Which issues do Republicans and Democrats most disagree about? Providing a social safety net, environmental protection, the role of labor unions, the role of government in ensuring equal opportunity, and the overall scope of government had particularly large gaps, and all have grown substantially since 1987: 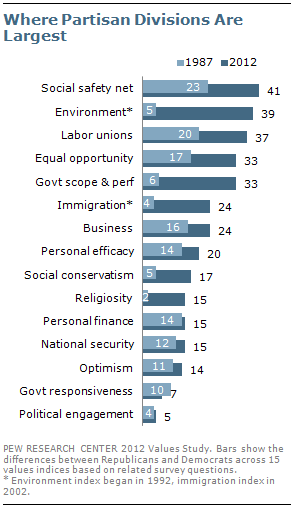 Political scientists Keith Poole and Howard Rosenthal looked at polarization among federal legislators from the late 1800s through 2011. If we look at party means for members of the House, we see that after a decrease in polarization mid-century, the gap has increased again since the 1980s. Though Democrats have become somewhat more liberal, the change is is largely due to Republicans in the House becoming more conservative on average:

David Roberts posted about the trend at Grist. The changes we’re seeing in the Pew data, he argues, are not due to big value changes among the electorate. Instead, we see that people are sorting themselves politically in a more consistent fashion. The parties used to contain coalitions that united liberal and conservative voting blocs, but both parties are becoming more ideologically consistent.

There are Blue Dog Democrats, who are more conservative than the party overall, and some moderate Republicans who are fairly liberal on social issues. However, there is less and less room for these individuals. Those seeking elected office find it difficult to win primaries within their parties. Citizens increasingly associate conservatism with Republicans and liberalism with Democrats, and choose their party affiliation accordingly. Thus, without any great change in the actual values of Americans, we get a more starkly politically divided nation and federal legislature.

It's interesting that the graphs show the Republicans as blue and the Democrats as shades of red, which is the inverse of what we have come (more recently) to associate with the colors of the two parties.

It's also interesting that Republicans aren't grouped based on geographic distribution, while Democrats are still broken out as "Southern Democrats" and "Northern Democrats". As you can tell from the graphs, the Democratic party has become increasingly dominated by "Northern Democrats" (the line for Democrats in general becomes insignificantly different from the line for Northern Democrats by the 1980s, whereas the line for Democrats in General USED to be about half way between Northern and Southern Democrats from the 1930s until the late-'60s).As an interesting "precursor" to the above charts, it's good to remember that party politics prior to 1880 were rather tumultuous. Remember the Tory party? The Federalists? The Whigs? The Anti-Federalists? (http://umlud.blogspot.com/2012/07/the-permanent-two-party-system-is.html )What the above charts shows me is that the Republican Party is either going to return from its march toward conservatism or it's going to fracture. If the former, it seems likely that the Democratic Party will come to include more "blue dogs" (thus marching them slightly more conservative). If the latter, then it seems likely that the Democratic Party will lose membership of current conservatives (who will move to join in the new, not-as-conservative-as-the-Republicans Party), but will also become slightly less conservative.Of course, the whole system could continue to limp along, since it's maintained and propped up by the expected reality of there being a two party system made up of these two parties, who would prefer to survive as THE ONLY two parties. (The system of elections, gerrymandering, institutional inertia, and a whole boatload of social relationships only help to dissuade and minimize the possibility at any loosening of the hold that the Democrats and Republicans have on near-exclusive political power.)

I like how 1980 starts the Republican up-tick. Well done Reagan. Well done.

We need to adopt a parliamentary system of government. The major reason the Founding Fathers did not follow Great Britain's example was because they opposed political factions/parties. Of course Great Britain also suffers from the lack of proportional representation.

The graphs seem to suggest that Southern Democrats were quite liberal in 1879. Does this seem odd to anyone else?

[...] the country is very polarized today and only gets worse during election time.  Later this week some people will rejoice and [...]