A new study of 10,000 Americans by the Pew Research Center finds that political polarization is more extreme than it’s been anytime in the last 20 years.  The median (or middle) Democrat and Republican are farther away from each other politically than in 2004 or 1994.  “Today,” reports Pew, “92% of Republicans are to the right of the median Democrat, and 94% of Democrats are to the left of the median Republican.” 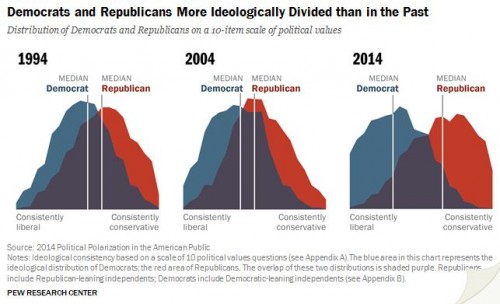 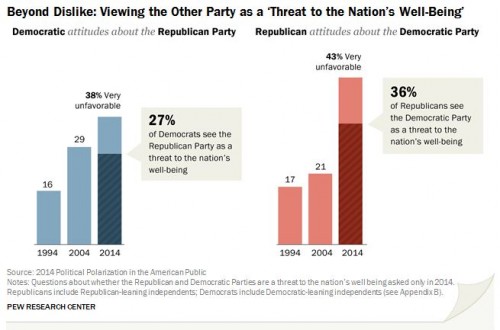 Even more dramatically, it is the people at the extremes who are most likely to vote in elections and contribute to candidates.  Today’s America is highly polarized, then, but the voting booth is even more so. 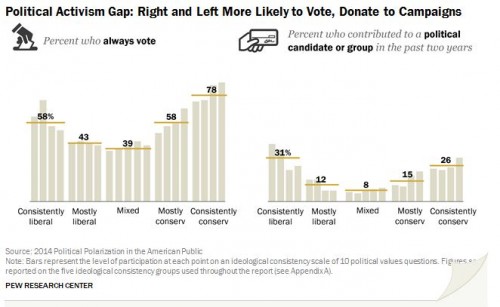 Pew concludes by noting that, even given this polarization, the majority of Americans are in the middle and are open to compromise between parties.  These individuals, however, are less politically active, whether out of disinterest or distaste for the rancor, leaving politics to the most extreme among us.

I blame the 24 hour news cycle and the relentless punditry that has overwhelmed the news media for this divide. We are never all going to see eye-to-eye and that's fine - there are liberal Americans and there are conservative Americans, but we are all Americans - and it would not kill us to put more effort into working together as a single, cohesive people. We are watching our country fall apart before our eyes for nothing less than politics and it's killing us as a nation. It's not one party or the other it is the divisiveness, stubborness, and political brinkmanship that is destroying America. Also, it's not the politicans that are really to blame, it is the fault of the voters - if they exist only to serve their party and not their country, they've got to go. Enough is enough.

Democracy is a bitch.

Or maybe people aren't voting because they think the two parties are too much alike, due in part to both taking large amounts of funding from the same billionaires and corporations. For many people I know, they aren't extreme enough.

"There's no way to vote against Goldman Sachs." - Chris Hedges

Job Sprawl May Be Ending — And For The Same Reasons The Partisan Politics Are Spreading | Kitsch-Slapped — March 5, 2015

[…] fact, that’s exactly what we see: a strongly partisan population that doesn’t talk to each other very […]

Can You Guess Someone’s Political Preferences by the Size of Their House? | Welcome to the Doctor's Office — March 13, 2015

[…] fact, that’s exactly what we see: a strongly partisan population that doesn’t talk to each other very […]

When talking about Democrats and Republicans people are far away from the right solutions. As custom papers said we need time to groom people and tell them what to do now.