Chart of the Week: What Happened to Women in Computer Science?

The original compute-ers, people who operated computing machines, were mostly women. At that period of history, most typists were women and their skills seemed to transfer from that job to the next. As late as the second half of the 1960s, women were seen as naturals for working with computers. As Grace Hopper explained in a 1967 Cosmopolitan article:

It’s just like planning dinner. You have to plan ahead and schedule everything so it’s ready when you need it. Programming requires patience and the ability to handle detail. Women are “naturals” at computer programming.

But then, this happened: 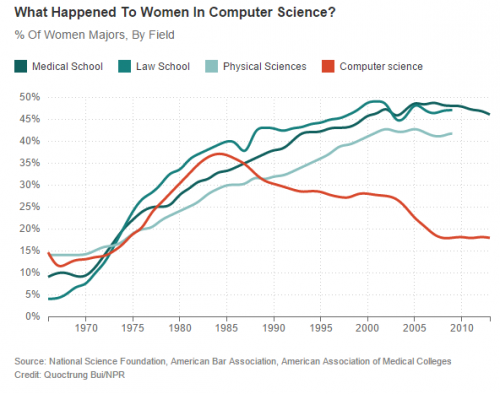 The folks at NPR, who made the chart, interviewed information studies professor Jane Margolis. She interviewed hundreds of computer science majors in the 1990s, right after women started dropping out of the field. She found that having a personal computer as a kid was a strong predictor of choosing the major, and that parents were much more likely to buy a PC for their sons than they were for their daughters.

This may have been related to the advertising at the time. From NPR:

These early personal computers weren’t much more than toys. You could play pong or simple shooting games, maybe do some word processing. And these toys were marketed almostentirely to men and boys. This idea that computers are for boys became a narrative.

By the 1990s, students in introductory computer science classes were expected to have some experience with computers. The professors assumed so, inadvertently punishing students who hadn’t been so lucky, disproportionately women.

So it sounds like that’s at least part of the story.

In The 1990's I once did my biology homework on the computer and never heard the last of it . There was no such thing as assumption to any experience, not even an assumption that anyone HAD a PC at all. Also, I don't think that PCs or their games were ever marketed towards anyt particular gender, as opposed to Barrie and my little Pony, which I personally think may account for at least part of the story.

It isn't just computer science—most engineering fields suffer the same imbalance (game design and electrical engineering are the worst at my university, even worse than computer science). Computer science has been the most vocal in worrying about and trying to correct the problem, with very little effect despite over a decade of serious effort. (See the Taulbee reports, back to 2001.)

Chart of the Week: What Happened to Women in Computer Science? - Treat Them Better — January 10, 2015

[…] Chart of the Week: What Happened to Women in Computer Science? […]

From 81-83, I did a business program at a community college, and the four categories of courses were accounting, marketing, management and computers. So I did some courses in Basic and COBOL.

From my recollection, there wasn't any gender imbalance in the college business program in general, but I do remember that the COBOL instructor was Mormon, and someone pointed out to me how he paid special attention to the Mormon boys in the class and mentored them. They were average or mediocre students, but they were the chosen ones when it came to hiring assistants, special projects, etc.

The Basic computer lab was always busy in the evenings, what with everyone playing Pacman and Space Invaders. But one night a week, we got booted out for a few hours because there was a small class scheduled, about 6 boys who looked to be about 12 or 13 years old. Some of them would come in a bit early and nab a computer if it was available, so I was able to see that the work they were doing was far more advanced than what we were doing.

It's this kind of mentoring and being offered opportunities not available to everyone or not being doled out on the basis of merit that gives guys a huge advantage. And of course it's not just with computers and engineering. When I later did a Fine Arts degree (88-91), where the majority of students were female, the profs were up in arms because there was a proposal to have the next available tenured position go to a woman since there was only one tenured female professor. Merit! Merit! they bleated. What nobody seemed to notice was that all of the students hired as studio assistants (wood shop, printmaking shop, photography lab, etc.) were male. Every single one. All 4 years that I was there.

I was in computer science in the very early 2000s, so about 15-20 years after the drop had started. In one of my 101-level undergrad classes, with over 350 students, 7 of us were women. By the time I graduated (I switched from comp sci to business), only 3 of those 7 were still in comp sci.

I can't say why the other women left comp sci, and I have no sociological data to share. However, I will mention my own experiences. When I left the major, I had straight As, so it wasn't that the work was too challenging. I really left for two reasons:

(1) I really didn't want to spend my life programming. I'm not saying that
is all that computer science is good for, but the comp sci program at my
school never really discussed what professions they were preparing us
for. Based on the professors, I got the impression that I would be
typing at a computer all day, every day, for the rest of my life. I took a business class on a whim, and they were always discussing bigger-picture items, rather than loops and binary code.

(2) A subset of the male student population was extremely vocal and annoying
to the female students. The constant joke, every time I walked into any
classroom, was that "this isn't home ec." The first 100 times I heard
it, it may have been funny (not), but it got old really fast. Professors
said things to the students, but it never stopped. I was also
constantly propositioned, on an almost daily basis, called names when I
declined, and I believe some of them may have messed with my computer,
although I could never prove it.

I am a Computer Science throwback from the 90's (HS/College). There were plenty of females in my HS computer/programming classes, less so in college, but I attended a college known for engineering and agriculture and maintained a slight male majority during my tenure....anyway... I have been alarmed by the SHARP decline of women in technology. Here's are my thoughts on contributing factors(sort of in chronological order): Please add to or subtract from this list...
1. 1990's GenX enter workforce
-Computer Science degrees one of top paying fields
2. Media "Backlash" (antifeminism movement) in full swing
3. Business Tech infrastructure redeveloped/automated
4. 1999-2000. Tech Bubble Bursts/Enron& its domino effect
5. Internet startups fail/Mass Corpoate Layoffs (see first in lastout, outdated managent bias)
6. 9-11/Bush Era recessions, job instablity
7. Melinnials grow up and attend college in hyper sexualized/gendered mediascape
8. Hero worship of traditional male roles (Cops,Firefighters,Military)
9. Women dissapear from public intellectual arenas (politcal talk & news industry)
10. GenX marry/change professions/leave work force in order to pursue other interests
11. Look up degree majors that pay highest (not computer science)
12. In general melinnials, like their parents, are tech consumers(savy) but not necessarily skilled in technical history, knowledge, or development
Projections: Big data analysis will help bring women back into software development...at least that is my plan :-p

[…] Chart of the Day: What happened to women in Computer Science?? […]

WHAT HAPPENED TO WOMEN IN COMPUTER SCIENCE? | Welcome to the Doctor's Office — January 18, 2015

The rise and fall (and rise?) of women in computer science | From the Balcony : observing the landscapes of sexism (and stuff) in science — January 27, 2015

[…] Sociological Images just relayed this NPR podcast about the (sharp!) decline of women in computer science. Apparently, gendered advertising of personal computers (sold as toys and targeted at boys/men) might have a lot to do with it, by introducing a gender gap in computer access and representativity in the computer culture (they’re also talking about it here). […]

[…] Chart of the Day: What happened to women in Computer Science?? […]

During the late '60s and the '70s I worked on software projects that had quite a few programmers who were women. Most of those women had not majored in Computer Science, but had degrees in Math, engineering or the physical sciences.

1. Computers were very expensive in that era and they were affordable by schools, businesses, hospitals and government agencies - not by individuals. In 1975, processor time on a time-shared computer cost $300 per hour ($1350 per hour in today's money). Most Individuals did not own a personal computer until hobbyists stated building microcomputers in the late '70s.

2. In 1967, there were only 10-12 universities in the US that offered a Computer Science degree. The demand for programmers in the late '60s far exceeded the supply of Computer Science graduates.

[…] https://thesocietypages.org/socimages/2015/01/10/chart-of-the-week-what-happened-to-women-in-compute… This link sends us to a website that shows an example of a line graph of women in computer science over the years. Labels like those explained on page 245 were not used but all the things that were at the top of page 244 for the most part are used. […]

Women remain underrepresented in technology fields all around the world. Based on recent research involving the gender gap in computer science, a significant contribution comes from families. Additionally, other contributions come from friends and classmates.

I think women have become too busy with their beauty and spend less time on science. What a shame, GLaDOS would be sad of this. The maximum that my girlfriend can do is print out an ms powerpoint presentation. And I taught her how to use the printer. Yes, and I buy toner on https://www.mrdepot.ca/products/brother-hl-2240-toner. She just presses the print button.