Today, the field of computer science is heavily male-dominated — men earn the vast majority of undergraduate and Ph.D. degrees in the field. But this wasn’t always true. When computers were first developed, we weren’t sure what kind of job programming was, whether a highly technical scientific occupation or a more secretarial-type one akin to being a typist. The fluidity of the developing field initially attracted significant numbers of women.

Anjan G. sent in an example of the normalization of computer programming as a female occupation, posted at Fog Creek. This article appeared in a 1967 issue of Cosmopolitan and quotes computer scientist Dr. Grace Hopper, a pioneer in the field, discussing why programming is a perfect fit for women — by drawing partly on gender stereotypes by assuming women are “naturals” at programming because they’re patient and pay attention to details: 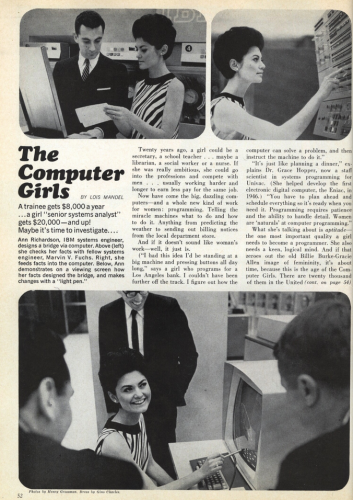 You can find a larger image here.

Also, if you’re interested, Fog Creek, a software company, looked at their own data to see if male and female job applicants have equal chances of getting hired, and they posted an interview with the only woman working on their technical staff, an intern.

This is a wonderful example of how cultural narratives inform how we think of things like how a job "should" be gendered.

Also, there are some priceless sexist details in there. The women are "girls", and "It's just like planning a dinner!" (I guess that's why the area of being a professional chef at a fancy restaurant is dominated by women! Oh wait...)

This does highlight the absurdity of stereotypes and how easily they can be manipulated. These days, the argument is that men are better at logic and, thus, preferable for programming. But pattern recognition and the ability to create patterns are involved in so many "feminine" activities. Sewing, embroidery and weaving are prime examples, and the process of creating the patterns for those goods is largely responsible for the creation of computer programming in the first place!

Human beings are incredibly talented at pattern recognition, manipulation and creation. It's simply a matter of which particular patterns a person might choose to focus on or be told they can excel at by society.

They actually covered this a fair bit when I was in school. Computer Science degrees used to be full of women - or at least, closer to 40% women up through the beginning of the 80's. Once the field became less theory and more engineering, the number has dropped. Now it consistently has the lowest female enrollment of the engineering disciplines.

My personal theory is that it changed when computers became a hobbyist industry instead of an academic one. The high-school level hobby of tinkering with computers is even more male-dominated in terms of interest than the degree programs. For practical reasons, this isn't as big of a deal in civil or mechanical engineering - few people are tinkering as early.

The big question to me is why are high school and junior high girls, even nerdy ones, not interested in hacking? It's a big deal when you step in your first CS class and 3/4 of the guys have been coding (albeit poorly) for ten years already. Few of these guys are *intentionally* hostile to girls - they're largely incredibly awkward around them because there were almost no girls in their hacker community growing up.

There's a documentary about this subject:  Top Secret Rosies:  The Female Computers of WWII

Interesting - my neighbor from a few years back worked for a pretty high tech operation in the 60s. She was a secretary, not a programmer or technician, but when photos of the lab were to be taken, she was asked to wear a labcoat and pose with the giant computers as if she was working. They were definitely not "cheesecake" shots, either.

This article from Stanford Gender news tells more of the story (from the author that Fog creek link).

Here's the best statistic from that site: 4% of people with feminine names who submitted a resume were given an offer, compared to 2% of people with masculine names. (Actual gender data is not collected in the hiring process; names are used as the only possible proxy)

Also of note is the comments regarding how phrasing announcements in 'competitive' language attracts more men, and "emphasizing the opportunities for mentorship and learning" attracts more women.

It starts in high school where young women are less likely to take the pre-reqs of pure math, physics, and chem. In high school, I was placed in a gifted class, where I didn't receive any help catching up on maths (my weakest point). I struggled terribly even though I identified as a nerd, had aced the shit out of everything previous to about year ten, and badly wanted to do Pure Maths; I just got lost in class, and had nobody to give me a hand. It was like me failing Maths wasn't seen as a problem. Because of this maths issue, I also couldn't keep up in Physics or Chem, and did 'soft' subjects instead. In turn, couldn't choose engineering or a B.Sciences in Uni... so I ended up with the B.Arts.
Half-ironically I now teach an Engineering communications course at the best university in my state.

CS major here, I must say, bravo to the girl who was interviewed. It reminds me of my minority origins.

"I really don’t like categorizing coders along gender lines. I mean, it really shouldn’t matter. I just wish there were a more elegant solution. I don’t want to be judged as a girl first.  I mean, there have been times when I’ve wondered, “Did I get picked for this project just because I’m a girl?”

Engineers and Teachers don't have the same level of education. A teacher generally would've majored in some subject which he is teaching.
Although there are level at which they can be compared as engineering teachers. But comparing all the teachers with the level of engineers isn't quite right.

[...] Go Geek… Again! and Normalizing Female Computer Programmers in the ’60s: This article appeared in a 1967 issue of Cosmopolitan and quotes computer scientist Dr. Grace [...]

Why women are the natural computer programmers « Feminist Philosophers — August 4, 2011

[...] When computers were first introduced, they were thought of as something for women (the secretaries and phone operators) to work with. So folks spent time generating hypotheses about why women would be so naturally well suited to them. More here. [...]

[...] Normalizing Female Computer Programmers in the '60s .Jul 28, 2011 Anjan G. sent in an example of the normalization of computer programming as a female occupation, [...]

[...] Normalizing Female Computer Programmers in the '60s .Jul 28, 2011 Anjan G. sent in an example of the normalization of computer programming as a female occupation, [...]

[...] Why Women Should Go to Conferences, Including TechWeek: GuestNormalizing Female Computer Programmers in the ’60′sWomen Hitting a Wall in ITThe Stereotype Threat and How It Affects Women in Computing [...]

[...] design a city for women. Groovy chicks in Afghanistan before the 70s. Computer programming was “women’s work” before the 70s. American Girls dolls for all types of [...]

[…] years ago, computer scientist Dr Grace Hopper reported that there was a surge in female programing, saying that women are “naturals” in this […]

I used to be unemployed but now i amnow i'mi am just a transporting and receiving officer but I've always wanted my ownmy own engagement ringquarrythisindividualmymy own, personalminemy own diamond ringtheyourby myselfour business.

There is also aone morecan be amight be anothera differentcan be anotheris really aalso is ais yet another third highest jackpot for 750 coins and $37,500 if you getobtaina personyou obtainan individualacquireyoufinda person receive 5 Wilson Fisk.