Many of us are familiar with the female blue-collar workers that took jobs in factories during World War II. It turns out, however, that women were also employed as mathematicians and computers (that’s “compute-ers”). In this photo, Jean Jennings Bartik and Frances Bilas Spence get ready to present an early computer to military officials in 1946: 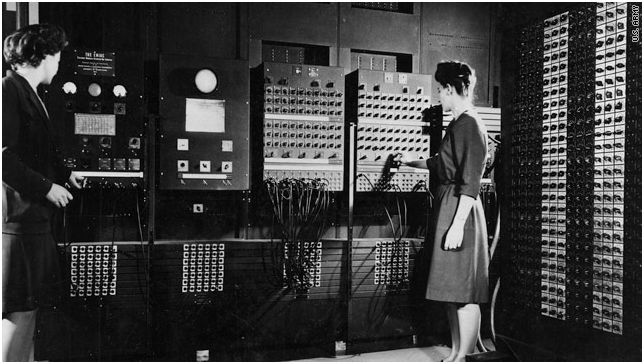 Women operating a “differential analyzer,” often checking the machine’s work by doing the math by hand: 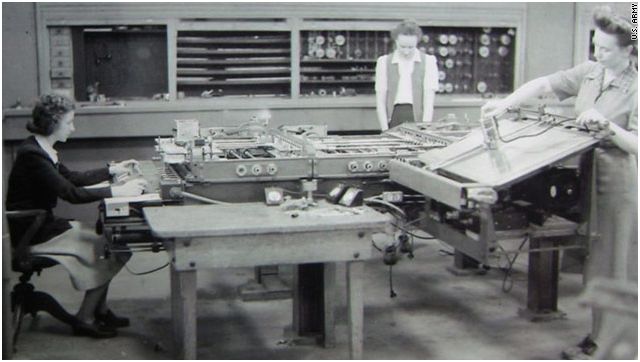 Jean Jennings Bartik in 1946 with an early computer and Arthur Burks: 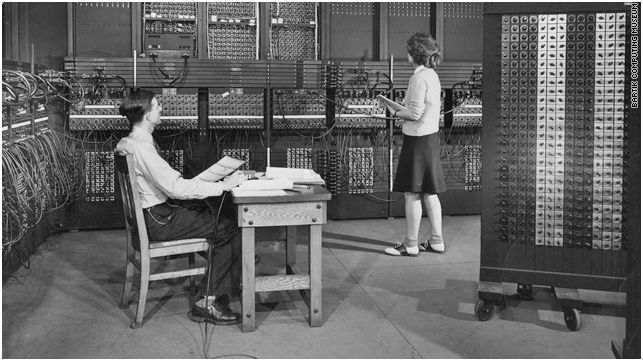 Their work was top-secret and so they weren’t part of the “Rosie the Riveter”-style propaganda at the time. Post-World War II disinterest in women’s accomplishments allowed their stories to remain untold.

A new documentary, forwarded to us by Jordan G. and Dmitriy T.M., reveals these high-tech Rosies:

Via BoingBoing, photos from CNN.

See also our post on the feminist mythology surrounding the iconic “Rosie the Riveter” image (hint: it was about class, not gender).  And you can buy Jean Jennings Bartik book, Pioneer Programmer, here.

As a mathematician, I'd like to point out that the calculations carried out by hand by these ladies are really huge and complex. I read about these women in my university's newsletter, and they all had, what would now be, at least a masters degree.
People now a days find it funny to check the computer's work, but it's often a smart move to do it from time to time, due to roundoff errors, truncation errors and such. Especially when working with differentials and approximations to complex functions.

So girls, when guys says "girls can't do maths/computers/science in general", tell them to shut up. These womens were the first computers, and the math carried out is really complex. I bet the guys telling you "girls can't do math" can't do anything near what these women do.
It is taught at my local University, but we generally don't do it by hand any more, and especially not with more complex functions than easy fourier-series and such. Wich is WAY below what these women did.

Very interesting article, though I'm a bit confused about when the descriptions refer to by 'computers'

My husband posted this story to Drupalchix :) -- I have to say it was such a (pleasant) surprise to a decent article on CNN.

Anyone interested in the topic should definitely read about Grace Hopper!

I can't find it now, but I once saw a picture of the U.S. Army's "Computer Room" (seriously, that's what the sign said on the door) from the First World War. Hundreds of young women (and, IIRC, one man) lined up at adding machines, with uniformed boys to pass the output of one calculation to the input of the next.

When the first electronic computers came online in the late 40s, all the computer operators were women, because they had the most practical experience with processing data and crunching numbers. It wasn't until the 1960s (when my Dad got involved) that working with computers was regendered as "men's work."

While they were definitely blue-collar workers, the "Calutron girls" of the Manhattan Project outproduced their more highly-educated male coworkers. They're another interesting part of the spectrum of women workers in the WWII war effort.

While the quickest internet source I've found for this story is in the Wikipedia entry on the Calutron, it cites The Road to Trinity by Ken Nichols.

For the sake of completeness, an earlier (and scientifically outstanding) example of women computers was the charmingly nicknamed Pickering's Harem, a group of initially unskilled women hired to visually process astronomy photographic plates. The women went on to develop a classification of stars by spectral characteristics and discover the period-luminosity relation of Cepheid variable stars, besides discovering an astounding number of astronomical objects.

[...] High-Tech Rosies in World War II » Sociological Images Their work was top-secret and so they weren’t part of the “Rosie the Riveter”-style propaganda at the time. Post-World War II disinterest in women’s accomplishments allowed their stories to remain untold. (tags: geek.feminism ww2 women mathematics) [...]

We have a History Club at our condo in St James - we meet once a month. Our leader (a retired history teacher) told us about the "ROSIES OF WW II). We were all inspired by their work. Too bad they hav'nt gotten more recognition. Let's hope future women's contributions do not get overlooked.

Hello, While they were definitely blue-collar workers, the "Calutron Girls" of the Manhattan Project outproduced their more highly-educated male coworkers. I think another interesting part of the spectrum of women workers in the WWII war effort.

I realize it was my decision to peruse, yet I really thought youd have something fascinating to state. All I hear is a cluster of whimpering about something that you could fix in the event that you weren't excessively bustling searching for consideration. For more check this website

Have with extremely low tone, and therefore, difficulties writing for long. He desires some kind of software with a purpose to be effective for high faculty math. check website to get any type of information about technology.student laptops

I feel like I had I’ve become way more reliant on technology over the past few years…these days, between school and blogging, I’m literally on my computer ALL the time, and like you, and there are few things more nightmarish than forgetting my phone at home.tech

I definitely need to challenge myself to be quiet more. I have forte a lot better but there is surely room for improvement! I feel like an old lady shaking my cane at a young whippersnapper when I say this, but what I wouldn’t give to have people in my real, every day, non virtual life who make it necessary not to spend all my time plugged in. Great post.

Technology has impacted our way of living nowadays big time. There are a lot of benefits we can get from there, but as great as those benefits are, we should also be aware of the danger they bring, no matter how minimal they are.Lisa

Hello, each car has around 2000 passive components due to the tech. Personally, all the tech is not for me, I enjoy driving and always will enjoy driving, no need for all the aids and self-driving cars, etc. Click here for more infomration about technologyfor more

I have with tech in meetings, certainly using laptops or iPads to take notes etc during them is that unless recording the meeting is critical, I just won’t trust that they are not playing around with other apps rather than focusing on the purpose at hand. At least with pen and paper, if someone is doodling it is pretty obvious to all (a fact that, as a constant doodler, I am always very aware of).Laptops

Students nowadays have more access to important information than ever, meaning that technology has opened up a whole new set of opportunities for them to learn.

I have a close family member who is an agent and she receives all of her commissions from the airlines – not from the traveller, just as the above poster mentioned. As with any time you work with someone in 'sales', as your friends and families for recommendations, but using an agent should not cost you more money than booking anything yourself via the web. However, they will probably save you considerable time with the knowledge that they already have. For more Check here

Hi, I turned off my device and only left my email open on my laptop to check once a day for any important information. They were fun as I even had time for myself and my family. It gave me time to unwind and think things through. Not to mention that my eyes weren’t red at the end of the day.best laptops virtual machine

According to my point of view, children's museums and museums, in general, are overlooked. We started taking Mason to the Pember Museum in Granville to see the animals every few months because he loves seeing the stuffed bear and the birds.Best Budget Laptop for Adobe Creative Cloud

When you think about it, the way we do things now seems so primitive in comparison. The human-computer interface is still such a vicious battleground, with the computer often being the victor.shimeji-ee.com

I think technology is an important part of our life. Technology has impacted our way of living nowadays big time. There are a lot of benefits we can get from there, but as great as those benefits are, we should also be aware of the danger they bring, no matter how minimal they are. Tech