This month I enjoyed a lovely week with my mother and step-father, during which we drove down to Key West, FL.  Flipping through the tourist book in the hotel, I was surprised to see this: 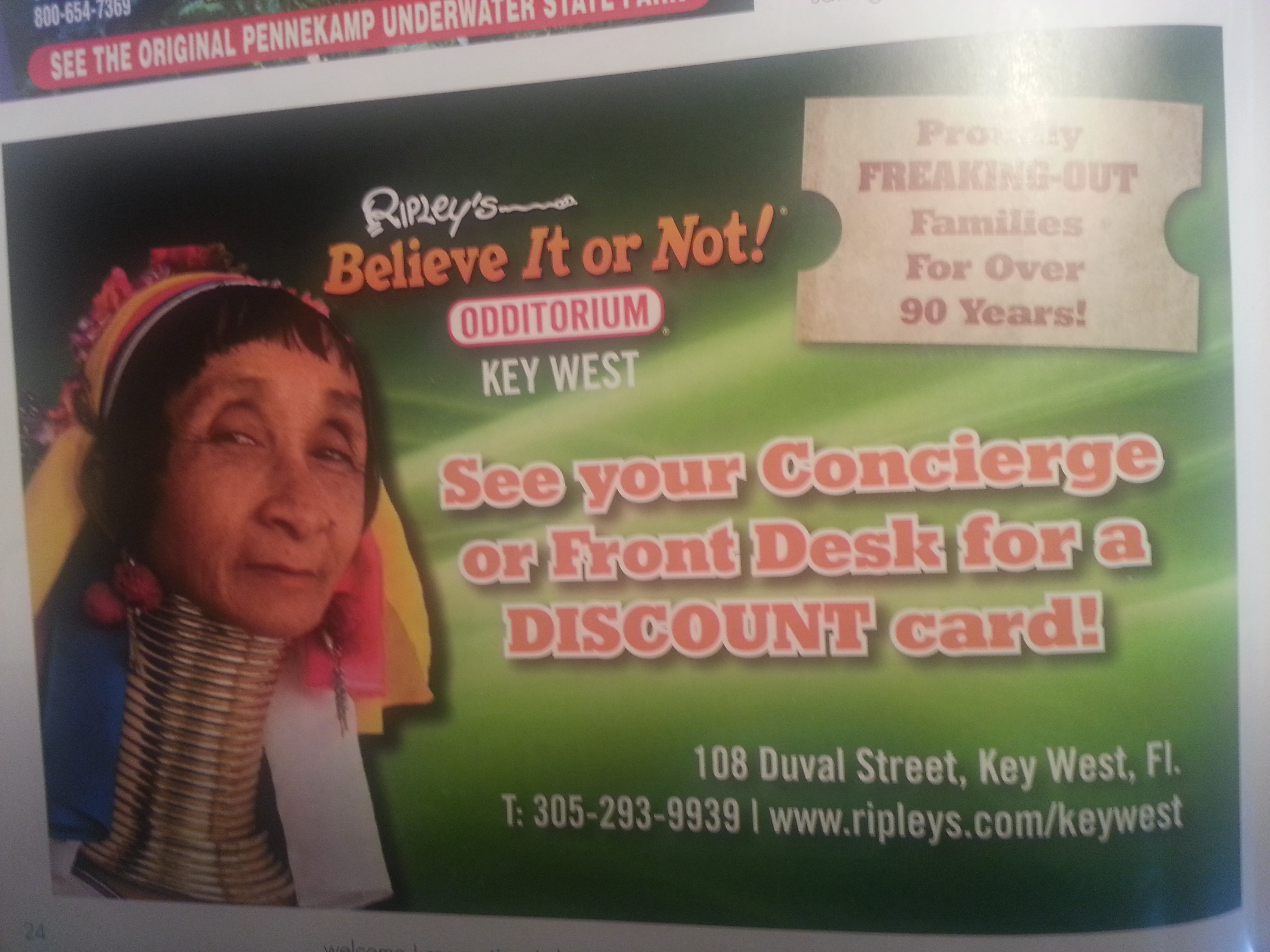 I’ve been writing for Sociological Image for over six years now and, as a result, it takes a lot to shock me.  Well, you got me, Ripley’s!  I did not know that we were still marketing racial or ethnic others as “oddities.”  At least not this blatantly.

The women who have historically practiced this neck lengthening illusion (what you are seeing is a depressed collar bone, not a longer neck) are a Burmese ethnic minority called Kayan or Padaung.  As late as the early 1900s, Europeans and Americans were kidnapping “Giraffe-necked women” and forcing them to be exhibits in zoos and circuses.  Promotional materials from that era look similar. Here’s an example: 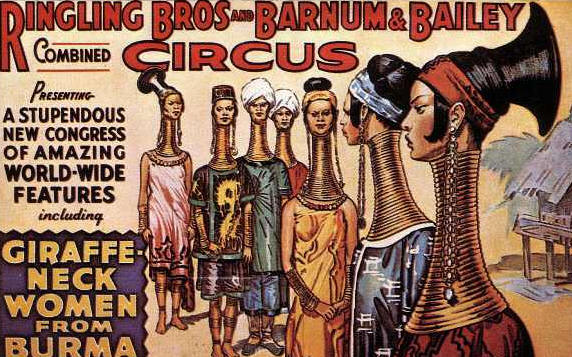 By the way, Kayan women weren’t the only humans kept in zoos.

I knew that Westerners still traveled to the communities where Kayan people live to see them “in their natural habitat” (sarcasm) and I’ve argued previously that this is a case of racial objectification.  I had no idea, however, that we still featured them as grotesque curiosities.  Ripley’s Believe It or Not!: “Proudly freaking out families for over 90 years.” Taking that tradition thing really seriously, I guess.

Really? They have live Kayan women caged in ripley museums?! This is a serious scandal!

While I agree that the advertising is problematic, the museum itself does display information about the culture of the Kayan women and makes many of the same points about how those women were historically othered as freaks and put on display. In fact, my impression of the museum is that it does a pretty good job of exposing how unethical the Ripley tradition was.

Today it's racism to deride a culture; tomorrow it's negligent to ignore systemic brutality. Here its peer pernicious group coercion; there its authentic belonging. Wherever the whim takes you, as long as you're on the side of the angels, eh?

I've been to the Ripley's museums in Gatlinburg, TN and Niagara Falls, OT, and neither of them engaged in that sort of racial shenanigans. The closest either one came was the sensationalist description of the Fiji Mermaid hoax ("Many people believed it was a REAL MERMAID! Believe it or not...").

And this is in Key West? I'd thought they were more progressive than that.

(BTW, speaking of Niagara Falls, don't go to the "torture chamber" section of Madame Tussaud's unless you have a very strong stomach. My dad took me through it when I was 4. I still don't know what he was thinking.)

I just happened to stumble upon this article and would like to take a moment to respond. My name is Anthony Sibilly, I am the General Manager here at the Key West Ripley's Believe It or Not! Odditorium.

First I would like to express that Ripley's Believe It or Not has never tried to exploit cultural differences and/or variations. Robert Ripley’s joy was that of an explorer. In his day, Americans were not as easily exposed to many of the cultural variations as we are today. Actually his syndicated cartoons were sometimes the first to expose our society to certain aspects of life around the globe. Yes at one point this may have been considered strange and odd, but Ripley, then and now has never portrayed his exhibits as “grotesque” or exploitations as the journalist has depicted. Actually I believe there was a misinterpretation of the advertisement. Though we “have been freaking out families” with all our not so norm exhibits, using the term “Freak” directed to particular person or exhibit has actually been banned from our company vocabulary as Ripley was so adamant that all people are to be respected and appreciated. The image depicted in the graphic is of Mogie, a woman from the Padaung tribe in Buma. Yes they do wear rings around their necks and the journalist is correct that it does not lengthen the neck; it compresses
her collar bone over time. This is actually what the “Believe It or Not” factor
of this exhibit is about…the compressing of the neck vs. the belief that it
stretches it, not the rings or the practice itself. Part of the exhibit shows a video of Mogi removing her rings for the first time to show the compression of the
collar bone. In the future, please feel free to address our museum if you have any questions or concerns at all about the way in which we are displaying our exhibits. We welcome media at our attractions and the opportunity to share our deep appreciation of cultures and practices all over the world.
Kind Regards,
Anthony Sibilly
General Manager
Ripley's Believe It or Not! Odditorium Key West
sibilly@ripleys.com