***TRIGGER WARNING for racism and enslavement***

Last month I posted about the human zoo captives popular during the 1800s and early 1900s in Europe and America.  Today I discovered an archive documenting the capture and display of members of a Burmese ethnic minority, the Kayan (also called Padaung), who have historically practiced neck-lengthening.

The archive, at Sideshow World, includes posters from the Hagenbeck-Wallace Circus and the Ringling Bros. and Barnum and Bailey Circus, as well as promotional photographs of the captives.  This material typically referred to the women as “giraffe-necked.” 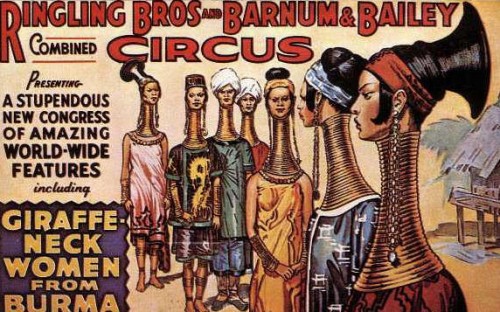 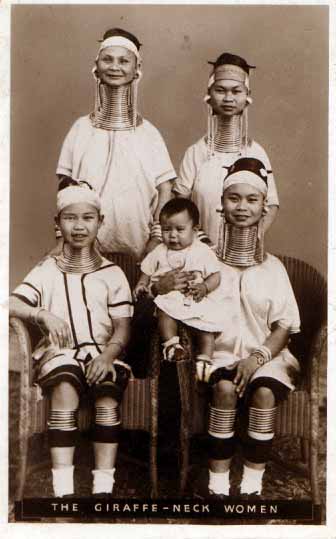 This political cartoon reveals the degree to which the “giraffe-necked woman” had become a well-known icon in the U.S.: 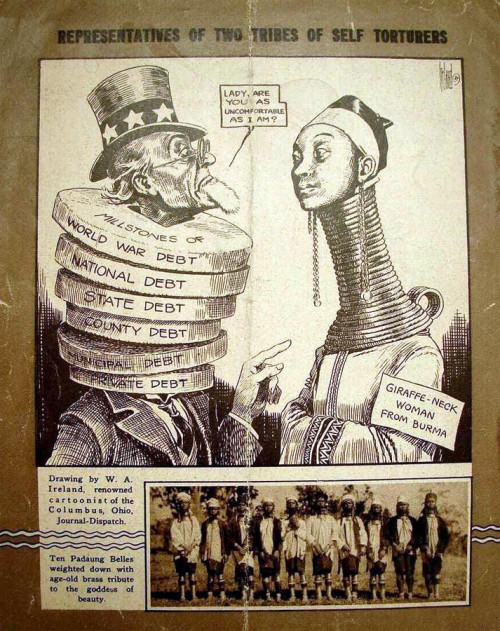 These women and the many others from various parts of the colonized world were typically kidnapped from their communities and put on display.  Many died young, exposed to diseases their bodies were not prepared to fight.  In some cases their remains — sometimes preserved as “freakish” samples — are still being repatriated.

plus ca change:
Burmese women with these rings are more or less held hostage in Thailand, for the cameras of tourists:
http://news.bbc.co.uk/2/hi/asia-pacific/7215182.stm

My memory on this is that the practice (which does not really lengthen the neck; it pushes down on the collarbone) was dying out as an "authentic" practice (insert debates regarding "authenticity" here) before trekking tourism in Thailand started bringing in large numbers of camera-wielding tourists who were willing to pay a few cents to photograph mutilated and captive women. I'm afraid the early 20th century ethnographic zoo has metastasized and has engulfed the entire planet.

There is a photo of a woman with neck rings on the poster for the San Francisco Ripley's Believe It Or Not, as advertised on SF public transportation yesterday. I will snap a photo next time I see one.

I once saw some of these women, with very mixed feelings, in one of their villages in northern Thailand.

Another issue about the neck rings, historically, is that is was a form of social control over women. If any of them got too uppity, the rings could be removed, which would break their neck. Now, the women's neck rings, and their longer necks, are the only thing that brings money into the village.

check out this new dior ad, in the context of this conversation:

Even though you've a few informative matters about automobile delivery, car transport, vehicle delivery however i might wish to understand extra approximately car delivery services and method and consequently the way to avail these services properly for automobile delivery from one nation to and any other country in the vehicle transport industry go to shipa1 for the most latest services and for the proper manual with none trouble.

The Spectacle of Subjugation: A Brief Overview of the Dark Histories Behind Circuses in the United States – kitsch — May 13, 2021

[…] shows.” The Ringling Brothers as well as the Barnum and Bailey Circus both had acts featuring “Giraffe-Necked Women,” better known as the Kayan, a Burmese ethnic minority that practiced neck-lengthening. Like many […]

The Kayan women in the circuses weren’t slaves that had been kidnapped. While perhaps not the best way to live - being on display - they didn’t appear to be that bad off.
https://issuu.com/discovermyanmarmagazine/docs/discover_myanmar_magazine_january_2/s/60787