Human Zoos at the Turn of the 20th Century

***TRIGGER WARNING for racism and enslavement***

During a dark period of world history, intellectuals pondered where to draw the line between human and animal.  They arrayed humans hierarchically, from the lightest to the darkest skin.  Believing that Africans were ape-like, they weren’t sure whether to include apes as human, or Africans as apes.

One artifact of this thinking was the “human zoo.”  Kidnapped from their homes at the end of the 19th century and into the next, hundreds of indigenous people were put on display for white Westerners to view.  “Often they were displayed in villages built in zoos specifically for the show,” according to a Spiegel Online sent in by Katrin, “but they were also made to perform on stage for the amusement of a paying public.”  Many died quickly, being exposed to diseases foreign to them.

This group of captives is from Sri Lanka (called  Ceylon at the time): 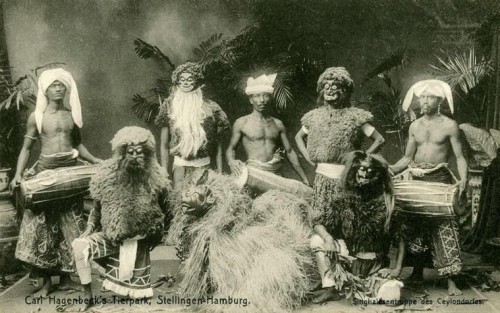 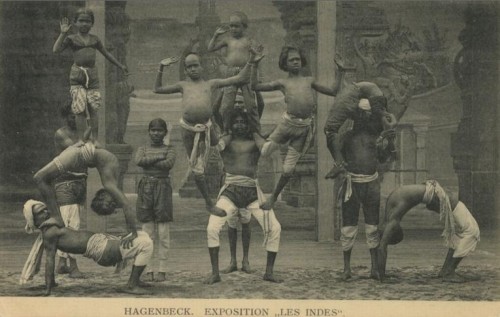 These captives are from Oromo in Ethiopia: 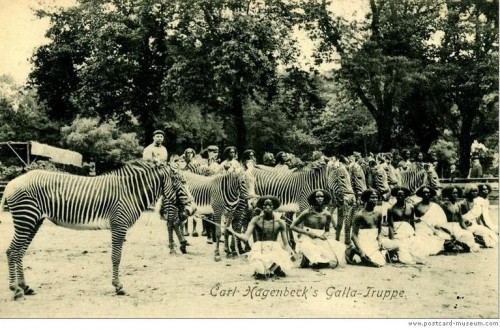 A German named Carl Hagenbeck was among the more famous men involved in human zoos.  He would go on expeditions in foreign countries and bring back both animals and people for European collections.  In his memoirs, he spoke of his involvement with pride, writing: “it was my privilege to be the first in the civilized world to present these shows of different races.”

The zoo in Hamburg still bears his name.

All humans are ape-like in many different dimensions....mainly because the biggest distinction between humans and other higher primates is semantics....

Any students of ancient history who can answer a question for me - was this a special feature of late 19th century colonialism, or has this sort of human menagerie been a horrible aspect of previous empires as well?

The Human Zoo: A Zoologist's Study of the Urban Animal by Desmond Morris, published by Kodansha Globe (1996).

See also the Japanese Village of the 1880s, just right in the japanisme craze and coinciding with Gilbert and Sullivan's The Mikado.

Now we have "reality t.v.". The greatest spectacle will always be humans.

I am not sure I would say that human zoos are an artifact of the thinking in the first paragraph, as much as there is a long history (that I am familiar with) in both Europe and the United States of putting "exotic" people on display, from slaves to indigenous populations around the world, as people were discovered people were sent back to Europe to be seen.  As someone previously mentioned, Columbus took people back to Europe with him.  I include the United States because I think a place can be made for the auction block and the carnival-esque nature of auction day where slaves were made to dance and be jovial served a similar function to what would later become “human zoos”.  Additionally, as the trend took of to have world’s fairs and world exhibitions, even when the United States hosted them, they would contain global villages including American Negro houses that were based off of various centers of black life in the US in the 1800s.

I think the most famous earlier example that is somewhat known is Saartje Baartman (the Venus Hottentot).  At the same time you have people like Tom Molineaux placing himself as an oddity in his boxing in the UK.  The thing that changed when you get to new colonialism is the number of people and place people are brought from and the means of recording their presence.  This is sort of where my work intervenes, or enters the conversation.  The invention of photography changed how this is remembered and how we perceive/believe in the efficacy of race.  The human zoos and expositions created a huge market for the distribution of the evidence of the difference of race.  The photo card became a way to share the experience with those who couldn’t make the trip to see the people kept in the cities.

That being said, another thing I find troubling about our current consumption of this type of imagery, and where I am hoping to intervene is the need to have trigger warnings. While I completely understand this was a disgusting and violent system, the photos that are shown associate the people in the photographs with the practice instead of the people who perpetrated the violence.  For those people pictured in the photographs, by reducing them to captives that are victims of this horrible practice, we erase the lives that they had before and maybe even during these practices, and don’t allow for the space of these photographs being reparative.  They allow us to face the invisible and forgotten people in specific ways.  Rather than their faces being
re-victimized by being placed under a trigger warning, it would have been more salient to have the photograph of Carl Hagenbeck's photo as the Trigger warning along with a photo of the zoo perhaps. When we show the victimized people as the trigger, we don’t allow the space for them to actually be people with any agency (agency can look like many different things).  Instead we continue perpetuating the belief that people who look like this are to be pitied and deserve our empathy, again taking away their agency and limiting their potential in our collective imaginations.

The issue was actually a bit more complex. Some people were kidnapped and essentially exhibited as slaves against their will, but in other instances they were professional touring companies of a kind who made a rather decent living at it. (This is a tangent based on some research I did about the World Fairs a while back, for some reason.)

This isn't to make light of the practice in general, which isn't much to the credit of the viewers, or of the humiliation and suffering of the 'acts', but to point out that the late 19th/early 20th centuries were a complex and quite globalized period which colonized people navigated in all sorts of ways, not all of which were as poor mute sufferers of suffering, tossed about by nasty white people with no personal agency or agenda.

Most were not captured. They willingly agreed to be part of it Captives my ass