The Tipping Point for Support of Same-Sex Marriage?

Nate Silver, at Five Thirty Eight, has a new post up about the increasing support for same-sex marriage in the U.S. In the past few months, four polls Silver deems credible have found, for the first time, more than half of Americans supporting legalizing same-sex marriage. Here’s a graph Silver created showing the results of polls on the topic over time (an update of his earlier graph): 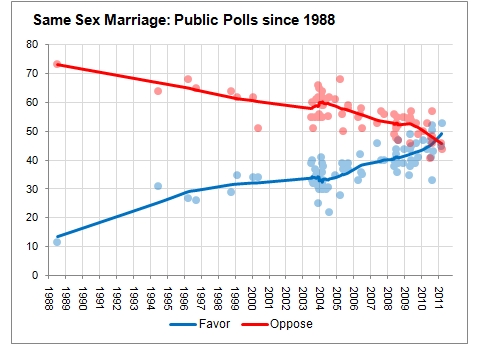 Of course, as Silver points out, results of public opinion polls don’t necessarily translate into immediate changes in politicians’ positions. Support for same-sex marriage is surely unevenly distributed, meaning some politicians will still find opposition to it to be a winning electoral strategy in their districts. Or they may count on the fact that many voters may support same-sex marriage but not view a candidate’s position on this issue as a deal-breaker. And, of course, sometimes politicians take a position and stick to it regardless of opinion polls.

That said, as with public opinion about gays and lesbians serving in the military, the trend line is clear, and it seems likely that fewer politicians will see opposition to same-sex marriage as a sure-fire winning strategy, as many have in the past.

Far more interesting question for me is, should equal rights be a democratic decision, specially when the benefited are a minority?

My favorite part of the graph is 2004, right around an election, where views go crazy back and forth, and mostly go backwards for a bit.

That's called "FOX News" and the Republicans using wedge social issues (Guns, Gays, God, Abortion, Immigration) in order to get their bigot base ready to vote against the bigot's best economic interests, simply to "protect marriage" or what not.

Then the election is over and the trends continue towards straight people no longer acting crazy.

also interesting: the shape of the graph... warrants another socimages post on being surrounded by phallo-centric images?

As to the question of whether whether gay marriage should be democratically decided: just for interest's sake, in Canada it wasn't. Preceding the law changing, Conservatives were calling for a referendum on the topic, but the prime minister at the time (Chretien) was quoted as saying that it wasn't fair to leave the human rights of a minority group in the hands of the majority.

The graph makes me wonder though: What happened between 2003 and 2005?

I'm willing to bet that the growing acceptance has to do with a new generation getting to voting age. My generation (I'm 21) seems to be more accepting of gays than Baby Boomers and especially old people.

[...] the issue of same-sex marriage in the United States. Despite fierce resistance from reactionaries, equal marriage is now supported by over half of Americans. I like to imagine that this was an effect of the 10% (assumed) of the population who are gay [...]

[...] seen a real shift in support for the issue and acceptance of homosexuality in general; since 2011, the majority of Americans are in favor of extending marriage to same-sex couples and the trend has [...]

now a day many emulator are there but Nox is better in many aspects with its mesmarizing features and ease of working(https://noxemulator.org/nox-offline-installer/)