We’ve posted in the past about the ways in which ads often depicted non-White women as wild and exotic (and thus exciting), even conflating them with animals through poses or animal-print clothing. Unstraightened African American hair is also used as an exotic marker, presented as less civilized. Recently readers sent in two separate examples of these tropes.

Michelle H. noticed that Lane Bryant advertised “exotic inspirations” as part of a “tribal trend” “inspired by nature” that allows you to use your “natural instincts”. The model used to personify this exoticism is an African American woman with unstraightened hair: 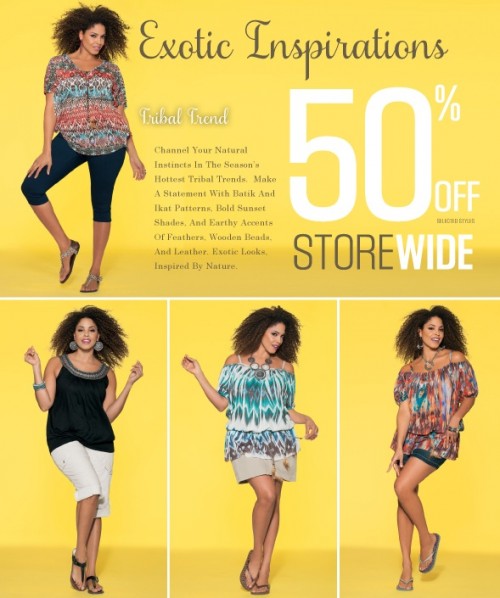 Similarly, Sonia A., Jen J., and an anonymous reader noticed that data analysis firm ATLAS.ti used an image of an African American woman with several pencils stuck in her natural curls along with text encouraging you to “tame your data” but also “go wild”:

The company removed the banner from its Facebook page after complaints, but it’s still on the company website in an image and accompanying brochure on the product info page and several other places on the site.

So, this may be just me, but I have never equated "exotic" and "less civilized."  To me, exotic meant interesting and different culturally, maybe a little entrancing.  To me, the word always had positive connotations and never indicated a lack in refinement, intelligence or civilization.

The models are presented in such bourgeois poses that at first I didn't see the problem. Then I saw the word "tribal" in the first ad and ... yeah, no. The other one has an element of body shaming that would not exist if the model were white.

Not only the hair of African Americans, but also that of non-Americans of African descent.

To non people of color wild and exotic is a compliment because they see themselves as pale and boring.

[...] African American Women as “Wild” and “Exotic” » Sociological Images Similarly, Sonia A., Jen J., and an anonymous reader noticed that data analysis firm ATLAS.ti used an image of an African American woman with several pencils stuck in her natural curls along with text encouraging you to … [...]

[...] “tan” in the acceptable sense (meaning, manufactured not perennial and natural). We are wild haired occasionally. . We’re the dark hand on the thigh of a white model to highlight her paleness and, by [...]

in apartheid south africa there was a thing called the "pencil test" .  They put a pencil in your hair, like the pic, and if it stayed you were a nie-blanke.  And "where's your pass-book?"