Mary T. sent in a photo she took of the cover of the Spanish (as in, from Spain) magazine Muy Interesante. It’s Not Safe for Work. 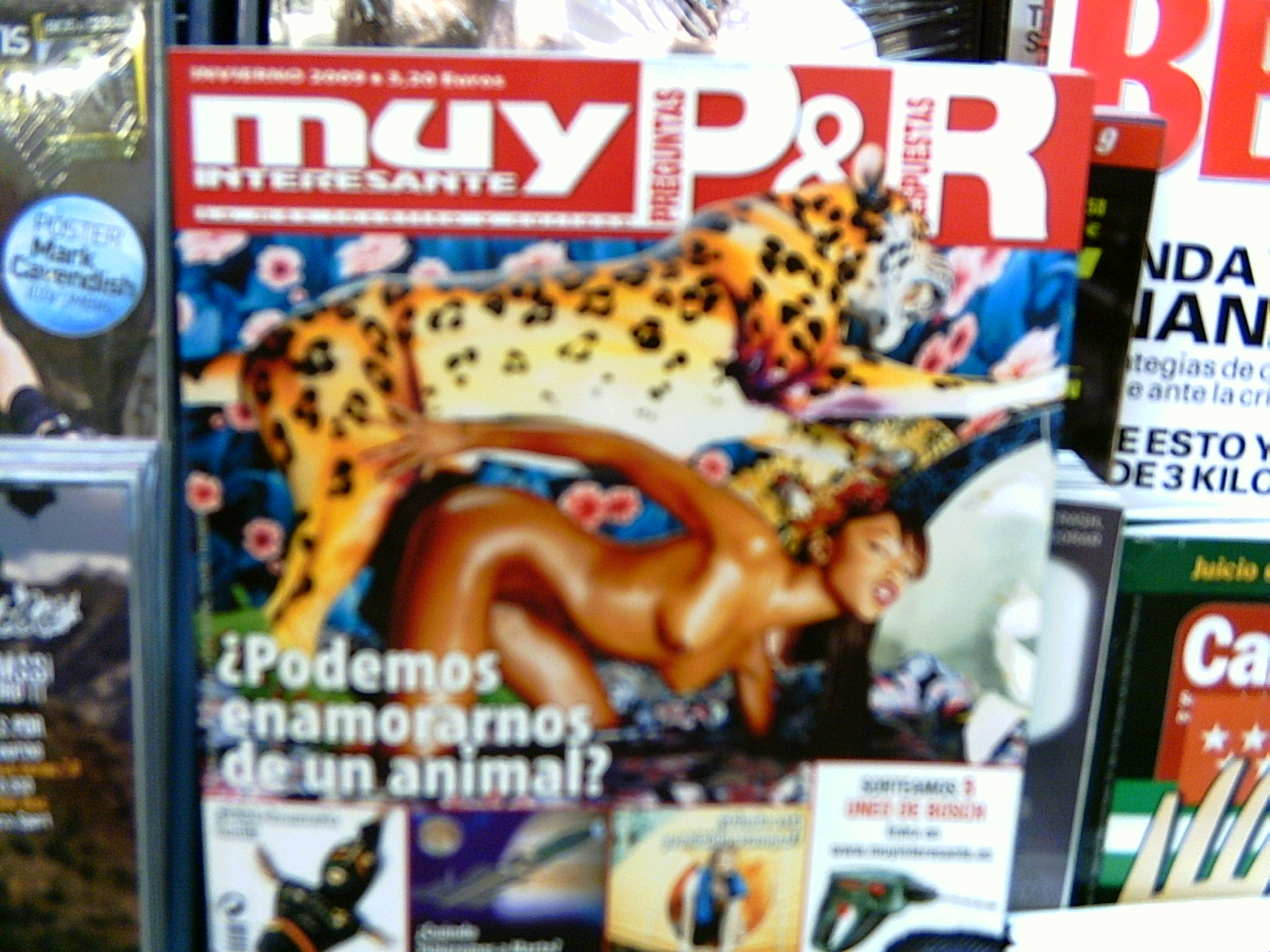 The text on the cover says, “Can we fall in love with an animal?” Notice the association between women of color and animals (is the animal we might fall in love with the leopard or her?), a very common theme. Black women in particular are often photographed either with animals (especially wild cats–tigers, leopards, etc.), posed in a cat-like stance making a snarling face, or in cheetah or other animal-print clothing. This ties in to beliefs that non-White women are often sexually aggressive “animals” in bed, unable to control their fierce sexuality (which could be both a turn-on and a threat, especially when it is connected to the idea that these women have large numbers of children with many men).

…it seems clear to me (based on the position of her hand and the text of the headline) that she is not being compared to the jaguar, the headline is asking if the bestiality being portrayed is possible or normal.

That may be true, but that doesn’t mean there’s not also an association between the woman and an animal going on. Among other things, bestiality is, according to research on sexual behaviors, more common among men; the decision to show a naked non-White woman in this pose, possibly having sex with an animal, is not a logical outcome of what we know about bestiality and who partakes in it but rather a choice to draw on various associations we make about sexuality and “savageness.”

I completely disagree, it seems clear to me (based on the position of her hand and the text of the headline) that she is not being compared to the jaguar, the headline is asking if the bestiality being portrayed is possible or normal

Ok, this is a far stretch. The text is asking if we can make love to animals. There's no comparison to non-white women to animals. Also, it is reasonable to have a non-white woman pose with the animal considering the magazine was published in a country where most likely the majority of the population is not white.

What I find interesting is that the woman is still viewed as a desirable sexual object while participating in a very taboo act. If a male were in a similar pose, there would be a completely different interpretation, and I highly doubt it would be on the cover of a magazine even if it is supposed to be "very interesting."

The magazine is from Spain. I assure you, most people there are "White".

Gwen for the win!

why is this "not safe for work"?

Ole--I think for at least some people, this wouldn't be ok for work, since she's naked (even though you can't see anything), so just to be safe, I put that in there--a number of readers have asked us to be a little more cautious after they've pulled up something at work that could have caused problems for them.

Couldn't it just be a metaphor and not referring to actual bestiality? If someone were to say "(S)He's an animal in bed", no one would think that person means they actually wish he were a real animal- it means he's aggressive in bed. Maybe he scratches or bites. Could the question really mean "Can we fall in love with someone who is animal-like in bed?" Isn't there often the idea that you don't settle down with the person who is the best in bed- you settle down with the virgin or bread-winner? Because people who are crazy in bed can't lead normal lives? Some people think that.

I agree with the comments that the woman is in a stereotypical pose often used with non-white women. She looks very cat-like. And she is very exposed- even the jaguar has fur to cover him up.

The woman in the cover is clearly a "latina", meaning from Latinamerica, which makes it all the worse considering the overt racism towards latinos in Spain. I doubt they would have had the nerve to put a traditionally "spanish" read: white woman in a similar position.

What I think people are missing is that the woman is in all fours, the jaguar is in all fours, and the pelvis of the latter appears "too close for comfort" to the bum of the former. I don't need to spell it out, the intentions of the producers of this cover are very clear, especially when you consider the headline of the cover's story.

heatherleila, the question does indeed refer to falling in love with actual animals, not with "animal like" people.

Note that in Spain it is legal and socially acceptable to expose women's breasts in the covers of magazines.

Sorry, I didn't see where the magazine was originally published before I made my previous post.

In light of this I did some research and Muy Interesante was first published in Spain in 1981, but is now published in Mexico, Argentina, and Columbia. Unless there is a different publication for each country, 2 of the 3 countries are in Latin America. If 2/3 of the readers are Latino (which in itself is a debatable term), then I still see nothing wrong with posting a Latina woman on the cover.

Also, I've lived in both Spain and Mexico, and I think it's interesting that this image is considered NSFW. We really need to lighten up in the U.S. and be more comfortable with nudity.

Wow, I butchered that last post. I wish I could edit it. I meant 3/4, not 2/3. Also, here is the link explaining the magazine.

"be more comfortable with nudity"

What you call nudity, some of us would consider pornography.

I like how there's also an article on power drills. This magazine really covers all the bases.

Steve might not feel so lightly about "nudity" if the cover featured full frontal nudity of a man, instead of a woman. I have a feeling that kind of nudity would make Steve uncomfortable.

"Also, it is reasonable to have a non-white woman pose with the animal considering the magazine was published in a country where most likely the majority of the population is not white."

It is OBVIOUS that they chose to put a woman of African descent over a non-African one (which is what is usually used on magazines in countries where most of the population isn't of African descent) because of the bestiality of the whole thing! As if it would be something more likely to happen because "Africans already live alongside with animals, after all!!!"
And ANYONE, when thinking about the subject, would picture a man doing the act, since bestiality is something that is more common among men! This is terrible!

wow this is disgusting and racist

[...] slavery; women of color in particular have a still-continuing history of being regarded as exotic, animal-like creatures not quite human; and media of all stripes (including PETA) continuously view women as commodities [...]

[...] women as wild and exotic (and thus exciting), even conflating them with animals through poses or animal-print clothing. Unstraightened African American hair is also used as an exotic marker, [...]

Not This Again: Views on Cultural Appropriation – Unspoken Thoughts of a College Sea Turtle — November 30, 2016

[…] women, particularly artists and entertainers became sexually exploited for their bodies and often compared to wild animals. If this has been the case historically, then why does the public consider Kim Kardashian’s butt […]