Black Woman Posed As And Among Animals (NSFW)

Clayton W. alerted us to this September’s issue of Harper’s Bazaar. Paul Goude decided to photograph Naomi Campbell as if she were in Africa with animals.  Clayton writes that it “…very nearly turns her into some sort of animal.”  Below are some images from the photo shoot, courtesy of Womanist Musings (via Feministing): 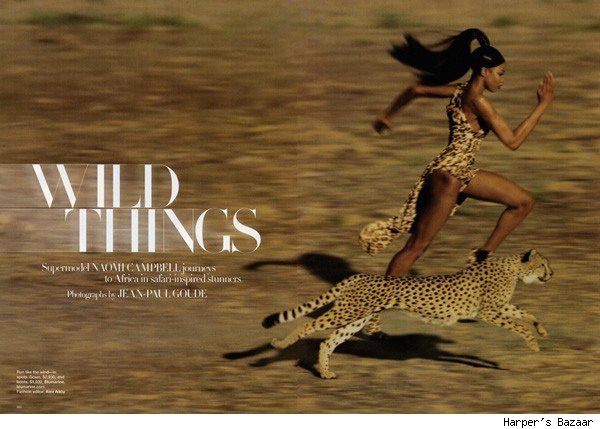 On this cover of Vibe, Lil’ Kim is posed animalistically and, it is asserted, she is “ready to roar”: 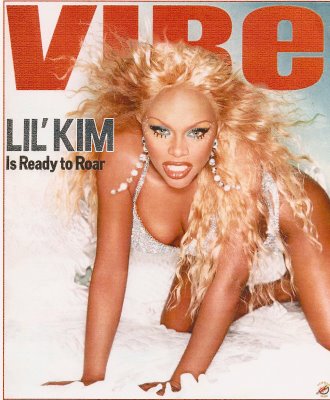 NEW! Naomi Campbell, is also put in leopard print in this photo in the December 2008 issue of Russian Vogue (found here): 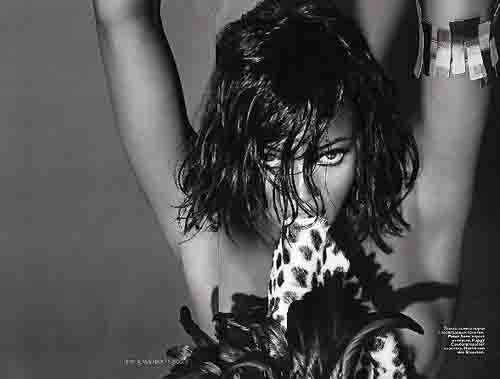 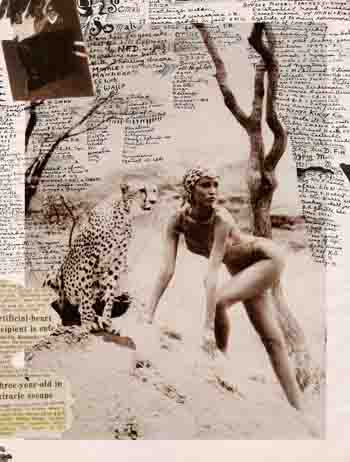 ALSO ALSO NEW! These two pictures of Grace Jones (from here) involve animalization (explicitly in the second case). These images may not be safe for work, so I’ve put them after the jump, along with another example: 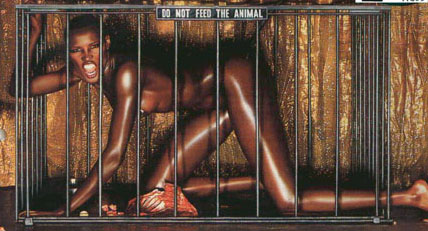 FINALLY! Bri A. sent in these photos of Bratz Nighty Nite dolls. Notice that the doll of color, Sasha, is in leopard print pajamas, but the others are not (a quick google search confirms the costume is race-specific; images here and here): 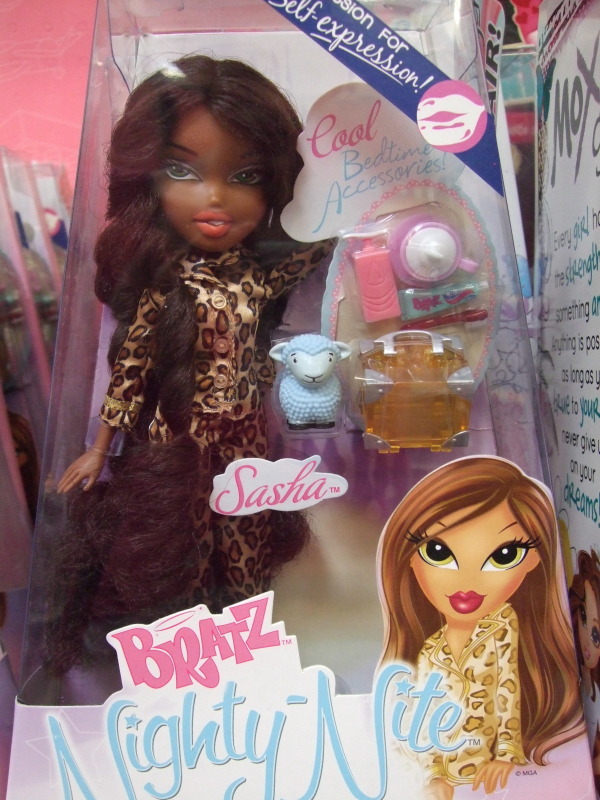 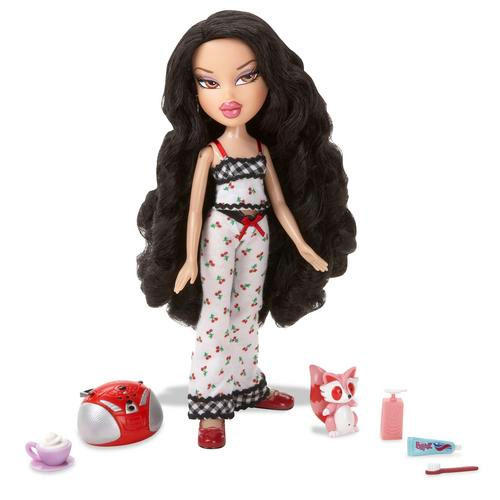 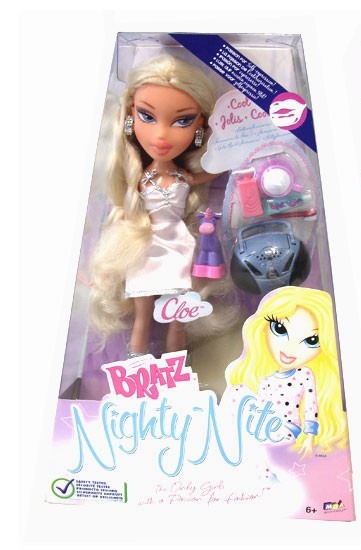 You can view our other posts in which black women and girls are associated with exotic animals here and here.

Don't forget to mention the rather overt ejaculation imagery in the elephant picture.

kierabs: Don't forget to mention, too, that elephants do this activity to keep cool (although can be trained to do it, too).

So... if there was a non-Black woman with African animals, what would you say that it was depicting? Colonialism (if the woman was "White", the clothing were "White", and there was overt hunting or displays of "White" wealth)? Fetishism (if the woman was dressed in the same manner as Naomi Campbell -- or is this also fetishism)?

So, too, what makes an animal "exotic"? Is it just an animal with which we are unfamiliar? Is a cheetah (African) more exotic than a mountain lion (North American)? What about if the former is in an American zoo, and the latter in the wild?

the 2nd poster does have a point. If it was a white woman, would the context of the photos change?

On the other hand, I look at these photos some more... and I see the black woman as a strong, independent warrior who runs with animals and she controls her own life. Obviously, not everyone sees it that way.

I can see how these photos are racist and patronizing.

but anyway... Naomi Campbell is stunning and I'm envious of her body.

Your "here here here and here" links seem to be broken when I view this page. They appear to be inserting an extraneous "2009/08/19/" into the URLs.

man, jumping rope with monkey looks fun. i would totally do that.

Oh, God...
The idea is that usually black people are portraited as "tribal".

We have our stereotypes regarding people of colour (any colour... and any race), genders and so on.
The idea is that these stereotypes sometimes implied all the wrong things.
I'm not sure that this exact fotoshoot is all bad.
Somebody already pointed out that the woman is active and happy.
On the other hand she is portaited that she is like a cat (something coming from the gender), that she is wild (something connected with her race skin colour) and that is it.
It will be good e.g. if somebody can show us a similiar fotoshoot with white women.
Not just standing like trees (like usualy white women are posing or in some gross and unpleasant position) but actually doing something, to have real action on the screen. Like real runnig, real jumping, swiming, dancing... anything.
Well??

P.P. Lisa, I apologise if in fact you didn't meant those things.
This is how I see it and what I think you are trying to point out.

In addition to thinking the whole premise is ridiculous and understanding that the whole thing is shopped all to hell, I feel the most disturbed by the depiction of the animals - especially when the model is pictured wearing animal skins. The attempt to "humanize" the animals is as bad as the attempt to "animalize" the woman.

I see the black woman as a strong, independent warrior who runs with animals

I know you meant that as a positive but that's sort of the problem. Black people are often portrayed as inextricably linked to Africa, even if they don't feel personally connected to it. What's more, comparing black people to animals has been used throughout history to degrade and reduce them. Put those two together and maybe you can understand why this is so unbelievably tasteless. The artistic director was presented with a beautiful, talented black model and all he could think to do was show her in an African setting, among the animals. Naomi Campbell is not African; she is British. (And for the record, she's of Jamaican descent, although this would still be tasteless even if she was of African descent.) They chose to put her in this kind of setting because of her skin. It's not about whether or not the photos portray her positively as an individual, it's about the consistent choices made over and over again by magazines and other images to make black women appear exotic and tribal merely because of their skin color.

Advertisers can't win. That's why I'm glad they just do what they need to do to sell product.

I'm an irish girl, what I want to know is whether harper's bazaar would like to perhaps photograph me in a field of sheep?

[...] circus (which is uncomfortable for me to have to say but viewing women as animals is unfortunately, nothing new). They see it like it’s their “gift” to us that they let us think we’re [...]

Did anyone not notice the black woman in CHAINS?!?!?

[...] Britney Spears, who performed in and around a cage for her Circus tour and, in the past, I know Grace Jones has been photographed in chains and in cages (which Amber Rose has recently re-posed. Read Black Girl Blogging’s take [...]

I don't see any racism here. These women are strong and powerful like most of us ;)

The African Woman in chains is very disturbing! what are they trying to portray? the world is changing and we now have an African president.. cant they see! what ever the photographer is trying to say is just not funny

[...] that proves the point that black women have historically been portrayed as animals, one even caged: http://thesocietypages.org/socimages/2009/08/19/another-photoshoot-places-a-black-woman-among-animal.... This is disturbing on many levels, but more so because it’s so very obvious that these women [...]

[...] as subhuman: We are constantly faced with women compared to animals or portrayed as bestial, especially women of color. It perpetuates the idea that girls and women aren’t fully human. [...]

[...] as subhuman: We are constantly faced with women compared to animals or portrayed as bestial, especially women of color. It perpetuates the idea that girls and women aren’t fully human. [...]

[...] The perversion of power doesn’t lie so much to cake itself as it does in the way the onlookers are able to laugh at it, which as Lisa Wade says at Sociological Images, indicates their privileged distance from the suggestion of genital cutting and blackface. This may very well have been part of the artist’s intent, to “trap” the white audience into making a mockery of the history of violence and objectification of black female bodies. The history of the hypersexualization of black female bodies is still present in today’s media, where images frequently dehumanize black women by likening them to animals. [...]

[...] ads that feature women of color, often showcasing them with an animal, painted as an animal, and/or posing as an animal. Such ads draw on our society’s historical tendency to depict people of color—and in fact, many [...]

[...] the ways in which ads often depicted non-White women as wild and exotic (and thus exciting), even conflating them with animals through poses or animal-print clothing. Unstraightened African American hair is also used as an [...]

[...] ads that feature women of color, often showcasing them with an animal, painted as an animal, and/or posing as an animal. Such ads draw on our society’s historical tendency to depict people of color—and in fact, many [...]

Is it not possible to get similar pictures without using the Europeanized dark skinned woman? I have seen similar pictures of everyday native women in Africa that were taken by friends either on safari or doing missionary work.

Certainly it would be odd to have white women in these pictures because they are not still existent in these environs. Beyond that, they never were. How odd would it seem to see Naomi Campbell dressed as a Scots-woman or in Tatar garb? Ancient Egyptian would be somewhat fitting in that the ethnicity is closer and I'm sure it would be acceptable to those crying racism because an Egyptian heritage suggests to them something advanced and worthy of pride. What simple manipulation they have been primed for and are aroused by, a sad joke...

[...] the ways in which ads often depicted non-White women as wild and exotic (and thus exciting), even conflating them with animals through poses or animal-print clothing. Unstraightened African American hair is also used as an [...]

[…] the ways in which ads often depicted non-White women as wild and exotic (and thus exciting), even conflating them with animals through poses or animal-print clothing. Unstraightened African American hair is also used as an […]

[…] opens in the jungle, setting the scene early by calling out society’s view of black women as exotic and animalistic. Her single cover, let’s be honest, would not be creating as much criticism if she was a […]

[…] premise of Mari’s powers is a little skeevy. Women of African heritage are disproportionately portrayed as being animals in marketing and fashion. Even Michelle Obama has been subjected to this […]

Our skin looks good in leopard print.I don't feel degraded by wearing leopard print, I feel powerful, sympathetic magic, sort of like the Native Americans who wore wolf skins to gain their power. It feels great to be in touch with the wild inner nature within. Human beings ARE animals afterall.