Incarceration on the Cheap in Louisiana

Yesterday I posted about the extraordinary number of people in Louisiana prisons.  The rise in imprisonment mirrors the U.S. growth that began with the so-called war on drugs, but was also triggered by a crisis in the early 1990s, after two decades of growth.  A federal court ordered Louisiana to reduce overcrowding in prisons, which had risen to an inhumane level.  They  had to either let criminals out or build more prisons.  They did the latter. 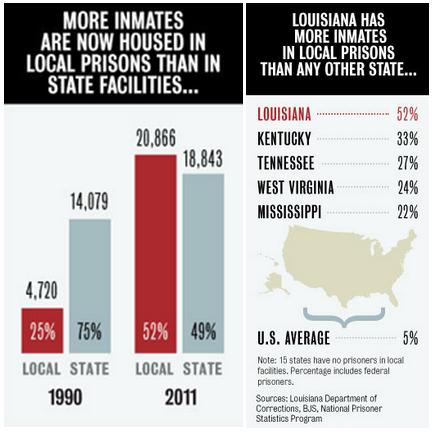 Why should we care if so many prisoners are housed in private, for-profit institutions?

The conditions in these prisons are worse than those in state prisons, especially when it comes to quality of life (like the opportunity to develop hobbies or practice their religion) and rehabilitative services (like high school equivalency classes and job training). These are desperately needed services; the average Louisiana prisoner has a 7th grade education and nearly a 3rd read below a 5th grade level: 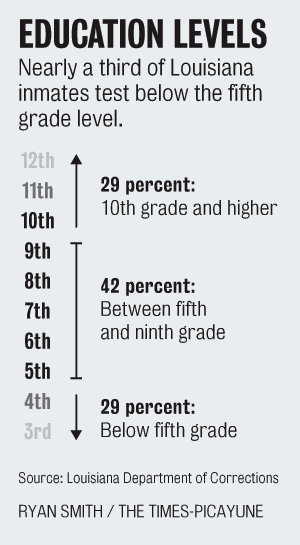 An inmate at the Angola state penitentiary costs $63.15 a day, compared with the $24.39 sheriff’s per diem. State facilities house the sickest and oldest, but [Department of Corrections] Secretary Jimmy LeBlanc admits part of the differential is the lack of educational offerings.

In fact, Louisiana spends less on its prisoners (in state and private facilities combined) than any other state in the U.S.: 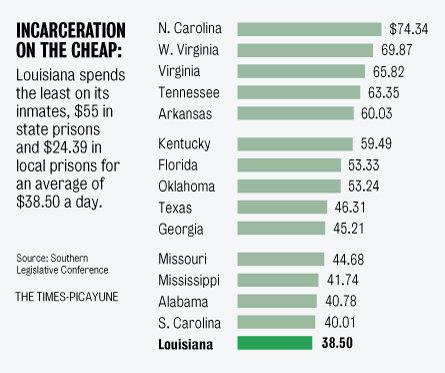 Law enforcement officials and parish residents may not like what’s happened in Louisiana, but many feel trapped.  For-profit prisons are sustaining local communities: they fund police departments and employ residents. Often they are the only local jobs with decent wages and benefits. Those residents support the local economies and keep small towns alive.

In this short video, an employee talks about the occupational opportunity the prison provides:

Many Louisianans, then, see the harsh sentences and high imprisonment as a price worth paying.  Says Sheriff Charles McDonald: “I know it sounds crazy and impersonal… but we’re stuck with this jail. We can’t walk away. We’ve got investors, employees.”

INCARCERATION ON THE CHEAP IN LOUISIANA « Welcome to the Doctor's Office — June 7, 2012

"For-profit prisons are sustaining local communities: they fund police
departments and employ residents. Often they are the only local jobs
with decent wages and benefits. Those residents support the local
economies and keep small towns alive."

Louisiana is a mafia state, and I mean much more so than most other states (and I'm being kind). There's a Boss Hogg in every Parish, it seems.

In any case, we're about at the end of this unsustainable and shameful trend (and about to begin reaping what we've sown). The question is whether we'll fix this mess ourselves (which will be very expensive and highly controversial) or wait until it finally explodes on its own (which will make the first option seem cheap by comparison and controversy will be moot). Hopefully the big promoters of private cages will end up spending some time in them themselves, and if their business practices (from kickbacks to creating inhumane -but cheaper- conditions) are ever investigated there will be plenty of reasons to lock them up.

In the distant future, this era will probably be viewed as a mini-Dark Age, or maybe as the last sputterings of the big one that began when Rome sort of fell.

You write that Louisiana has more prisoners in private, for-profit prisons, but your graphic shows that Louisiana has more prisoners in local prisons.  Not all local prisons in Louisiana are private.  In New Orleans and the surrounding area, the local parish prisons are run by the government and operated by the Sheriff's Departments.  Sheriff's deputies supervise the prisoners.  (My brother and mother have both served as Sheriff's deputies in Louisiana so I know that for a fact.)  Since prisoners can serve up to 2 years (at my last check) in a parish prison, many charged with misdemeanors will serve their sentences in a parish prison and many sentenced for felonies will spend their first two years in one.

[link] Incarceration on the cheap in Louisiana | feimineach.com — June 1, 2013

[…] Next I’ll follow up with a post on why there are so many for-profit prisons in Louisiana and how it’s affected the lives of prisoners both during and after incarceration. […]

You can always take advantage of the many EZTV mirror and proxy sites that are available via a quick Google search of the web. These sites contain all of the content of the original site, and their IP addresses may not be geo-blocked or known to your ISP.