Some Trends in Imprisonment 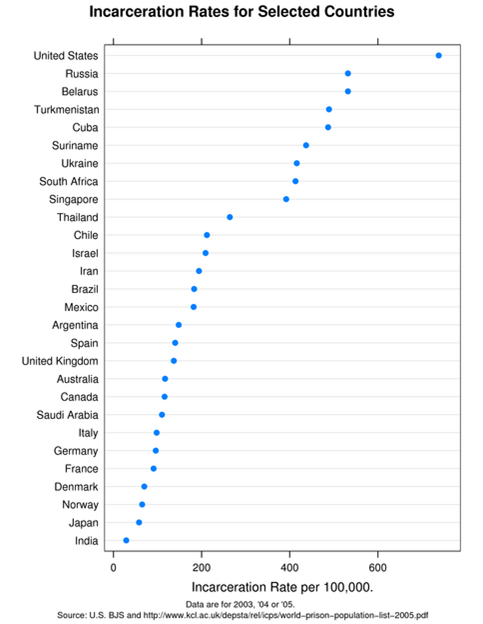 (This first figure was made by Kieran Healy.) 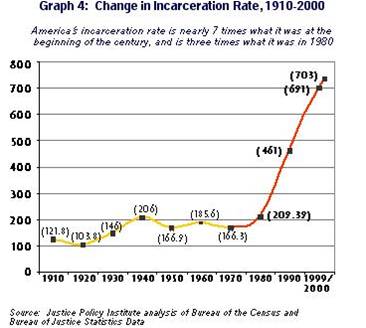 So our imprisonment rate is the result of imprisoning people who break drug laws, NOT violent criminals or even people who commit property crimes.  The increase is largely due to more aggressive policing of drug law violations.

And, as you can see in the figure below, the aggressive policing of drug law violations can be found disproportionately in black neighborhoods.  (White and black people take drugs at a very similar rate, but black neighborhoods are more heavily policing and drugs more common among blacks than white have carried heavier sentences — i.e., crack versus cocaine until recently).  This figure shows that the increase in the incarceration rate is mostly an increase in the black incarceration rate. 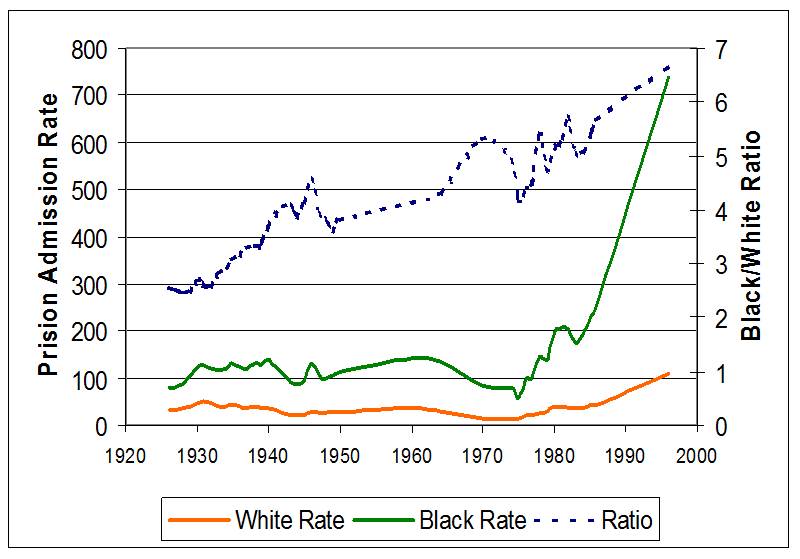 Thanks to the amazing Pam Oliver for reminding me that this last graph comes from her work on the incarceration rate (found here).

This also has major impacts outside neighborhood arrest rates. Over at Dispatches from the Culture Wars, Ed Brayton recently wrote two stories (links below) about how the War on Drugs is having deleterious consequences not originally intended, the first on deer hunting (and by extension, one could argue, on hemp production) and the second on medical marijuana provision to minors.

Hi Lisa, that last graph looks like one of mine (and older version), and you appear to have forgotten to put the source up. The source is calculations by Pamela Oliver from two data sets, the NPS and the NCRP. --Pam

... and total violent crime rates have plummeted during that time as well.

[...] on this topic (including disparities broken down by state) at Pam Oliver’s website. Also see this post about international imprisonment rates. Thanks, [...]

[...] a month ago, a post on trends in imprisonment from (where else) Sociological Images picked up on some of the thoughts I’ve had about the [...]

Loic Wacquant (sociologist at berkeley) has actually written about this subject.. his book is called punishing the poor and analyses exactly these kinds of data. If I understood him correctly, he is making the case that the imprisonment is increasingly replacing social benefits/security as a way to keep the poor in check. I'd check it out, it's good and illuminating stuff.

[...] see our posts on America’s high imprisonment rate (here and here), the percentage of children with a parent in prison, by race, black/white disparities in prison [...]

[link] Incarceration on the cheap in Louisiana « slendermeans — August 23, 2012

[...] prisons.  The rise in imprisonment mirrors the U.S. growth that began with the so-called war on drugs, but was also triggered by a crisis in the early 1990s, after two decades of growth.  A federal [...]

The last graph is very interesting. Usually the unusually high black incarceration rate is blamed on racism yet it's quite revealing to see it was much lower in 1930 than in the late 90's!

quick hit: Incarceration on the cheap in Louisiana — January 6, 2014

[…] prisons.  The rise in imprisonment mirrors the U.S. growth that began with the so-called war on drugs, but was also triggered by a crisis in the early 1990s, after two decades of growth.  A federal […]

Incarceration on the Cheap in Louisiana | A Nerd's Guide to New Orleans — February 27, 2015

[…] Louisiana prisons.  The rise in imprisonment mirrors the U.S. growth that began with the so-called war on drugs, but was also triggered by a crisis in the early 1990s, after two decades of growth.  A federal […]